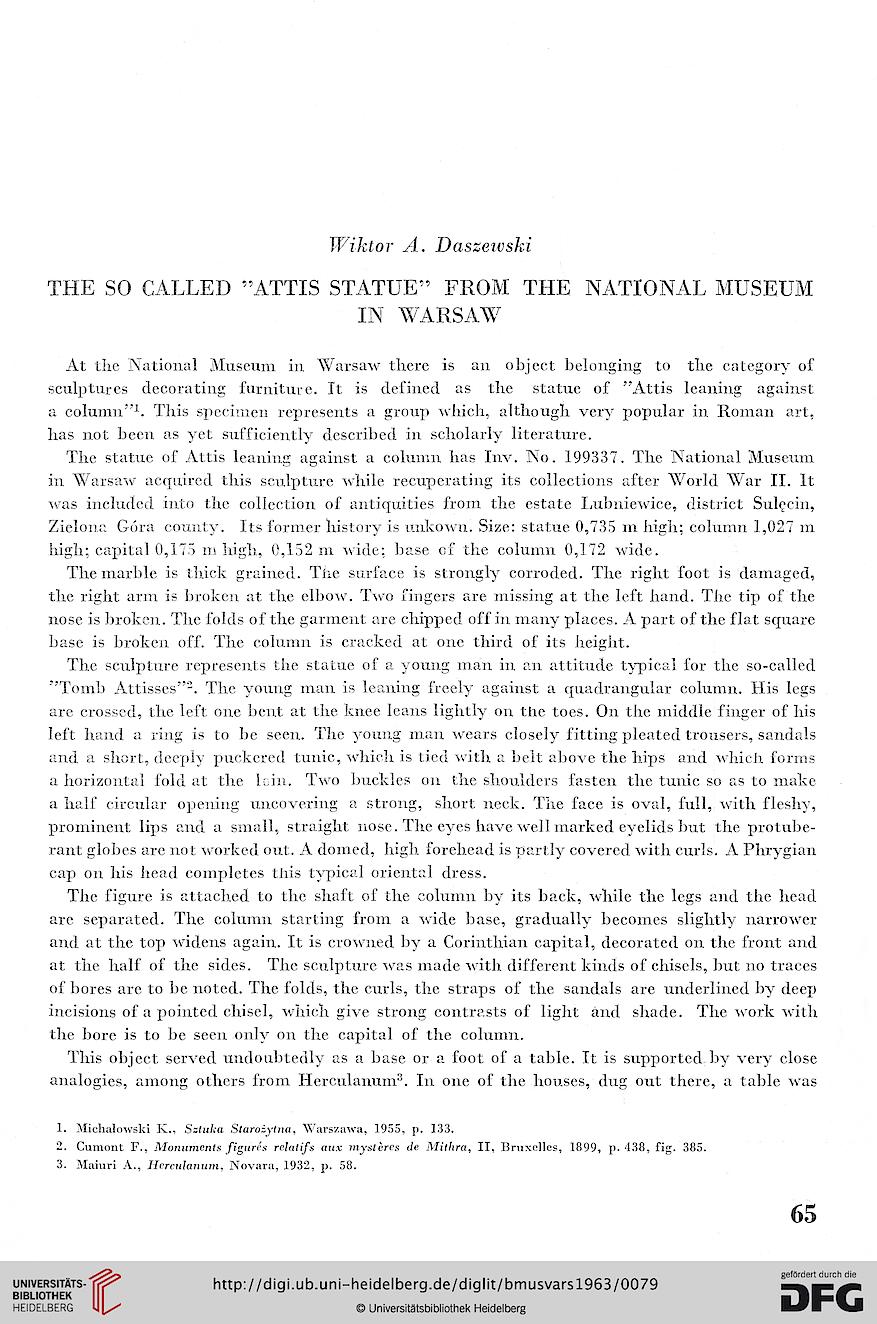 THE SO CALLED "ATTIS STATUĘ" FROM THE NATIONAL MUSEUM

At the National Museum in Warsaw there is an object belonging to the catcgory of
sculptures decorating furniture. It is defined as tlie statuę of "Attis leaning against
a column"1. This specimen reprcsents a group which, although very popular in Roman art,
lias not been as yet sufficiently dcscribed in scholarly literaturę.

Tlie marble is thick grained. The surface is strongly corroded. Tlie right foot is damaged,
tlie rigbt arm is broken at the clbow. Two fiugers are missing at the left liand. Tlie tip of the
nose is broken. The folds of tlie garment are chipped off in many places. A part of the fiat sąuare
base is broken off. The column is cracked at one third of its lieight.

The sculpture reprcsents tlie statuę of a young man in an attitude typical for the so-called
"Tomb Attisscs"3. The young man is leaning freely against a ąuadrangular column. His legs
are crossed, the left one bent at the knee leans lightly on the toes. On the middle fiuger of his
left hand a ring is to be seen. Tlie young man wears closely fitting pleated trousers, sandals
and a short, deeply puckered tunic, which is tied with a belt above tlie hips and which forms
a horizontal fold at the loin. Two buckles on the shoulders fasten tlie tunic so as to make
a half circular opening uncovering a strong, sliort neck. Tiie face is oval, fuli, with fleshy,
prominent lips and a smali, straight nose. The eyes have well marked eyelids but the protube-
rant globes are not worked out. A domed, high forehead is partly covered with curls. A Plirygian
cap on his head completes this typical oriental dress.

Tlie figurę is attacb.ed to the sliaft of the column by its back, while the legs and the head
are separated. The column starting from a wide base, gradually becomes sliglitly narrower
and at the top widens again. It is crowned by a Coriuthian capital, decorated on the front and
at the half of tlie sides. The sculpture was made with different kinds of chisels, but no traces
of bores are to be noted. The folds, the curls, the straps of the sandals are underlincd by deep
incisions of a pointed chisel, which give strong contrasts of light and shadc. Tlie work with
the bore is to be seen only on tlie capital of the column.

This object served undoubtedly as a base or a foot of a labie. Tt is supported by very close
analogies, among others from Herculanum3. In one of the houses, dug out there, a table was