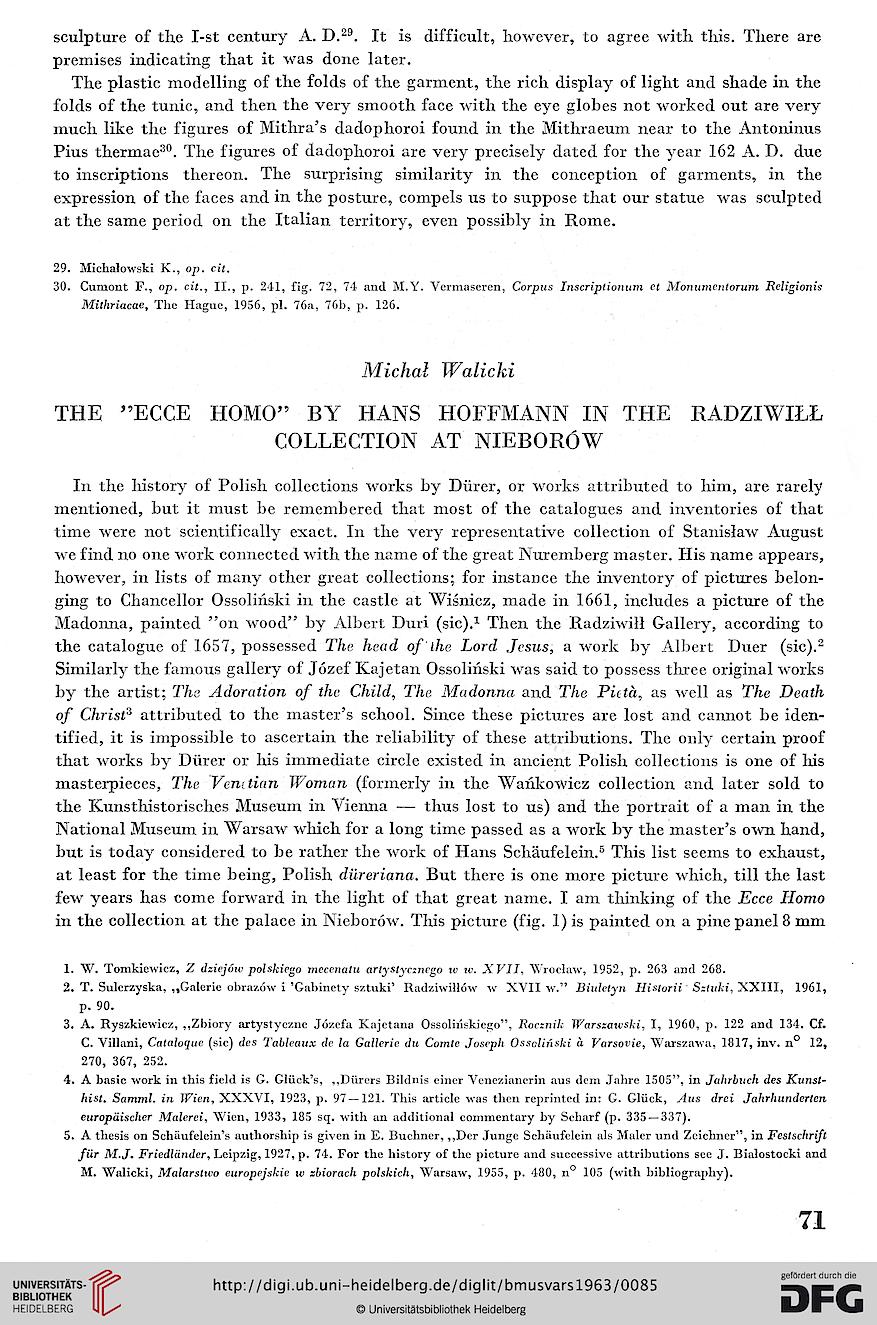 Information about OCR text
sculpture of the I-st century A. D.29. It is difficult, howeyer, to agree with tliis. There are
premises indicating that it was done later.

The plastic modelling of the folds of the garment, the rich display of light and shade in the
folds of the tunic, and then the very smooth face with the eye globes not worked out are very
much like the figures of Mithra's dadophoroi found in the Mithraeum near to the Antoninus
Pius therinae30. The figures of dadophoroi are very precisely dated for the year 162 A. D. due
to inscriptions thereon. The surprising similarity in the conception of garments, in the
expression of the faces and in the posturę, compcls us to suppose that our statuę was sculpted
at the same period on the Italian territory, cven possibly in Rome.

In the history of Polish collections works by Diirer, or works attributed to him, are rarely
mentioned, but it must be remembered that most of the catalogues and inventories of that
time were not sciciuifically exact. In the very representative collection of Stanisław August
we find no one work connected with the name of the great Nurembcrg master. His name appears,
however, in lists of many other great collections: for instance the inventory of pictures belon-
ging to Chancellor Ossoliński in the castlc at Wiśnicz, made in 1661, includes a picture of the
Madonna, painted "on wood" by Albert Duri (sic).1 Then the Radziwiłł Gallery, according to
the catalogue of 1657, possessed The head of ihe Lord Jesus, a work by Albert Duer (sic).2
Similarly the famous gallery of Józef Kajetan Ossoliński was said to possess three original works
by the artist; The Adoration of the Child, The Madonna and The Pieta, as well as The Death
of Christ3 attributed to the master's school. Since these pictures are lost and cannot be iden-
tified, it is inrpossible to ascertain the reliability of these attributions. The only certain proof
that works by Diirer or his immediate circle existed in ancient Polish collections is one of his
masteipieces, The Yenitinn Woman (formerly in the Wańkowicz collection and later sold to
the Kunsthistoriscb.es Museum in Yienna — thus lost to us) and the portrait of a man in the
National Museum in Warsaw which for a long time passed as a work by the master's own hand,
but is today considered to be rather the work of Hans Schaufclein.5 This list seems to exhaust,
at least for the time being, Polish dilreriana. But there is one more picture which, till the last
few years has comc forward in the light of that great name. I am thinking of the Ecce Homo
in the collection at the palące in Nieborów. This picture (fig. 1) is painted on a pinepancl8 mm