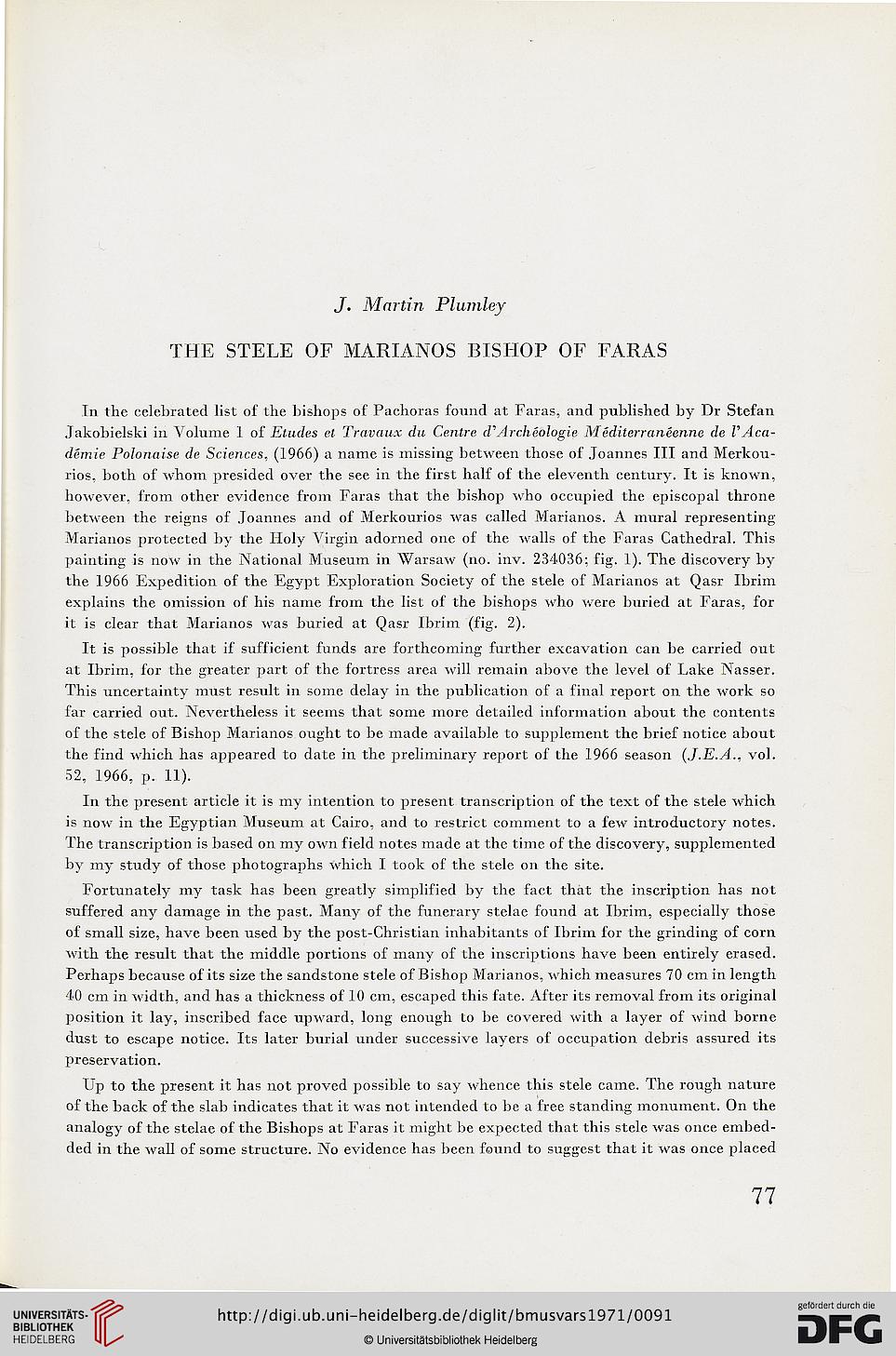 THE STELE OF MARIANOS BISHOP OF FARAS

In the celebrated list of the bishops of Pachoras found at Faras, and publislied by Dr Stefan
Jakobielski in Volume 1 of Etudes et Travaux du Centrę d''Archeologie Mediterraneenne de V Aca-
demie Polonaise de Sciences, (1966) a name is missing between those of Joannes III and Merkou-
rios, both of whom presided over the see in the first half of the eleventh century. It is known,
however, from other evidence from Faras that the bishop who occupied the episcopal throne
between the reigns of Joannes and of Merkourios was called Marianos. A mural representing
Marianos protected by the Holy Yirgin adorned one of the walls of the Faras Cathedral. This
painting is now in the National Museum in Warsaw (no. inv. 234036; fig. 1). The diseovery by
the 1966 Expedition of the Egypt Exploration Society of the stele of Marianos at Qasr Ibrim
explains the omission of his name from the list of the bishops who v. ere buried at Faras, for
it is elear that Marianos was buried at Qasr Ibrim (fig. 2).

It is possible that if sufficient funds are fortheoming further excavation can be carried out
at Ibrim, for the greater part of the fortress area will remain above the level of Lake Nasser.
This uncertainty must result in sonie delay in the publication of a finał report on the work so
far carried out. Nevertheless it seems that some more detailed information about the contents
of the stele of Bishop Marianos ought to be made available to supplement the brief notice about
the find which has appeared to date in the preliminary report of the 1966 season (J.E.A., vol.
52, 1966, p. 11).

In the present article it is my intention to present transcription of the text of the stele which
is now in the Egyptian Museum at Cairo, and to restrict comment to a few introductory notes.
The transcription is based on my own field notes made at the time of the discovery, supplemented
by my study of those photographs which I took of the stele on the site.

Fortunately my task has been greatly simplified by the fact that the inscription has not
suffered any damage in the past. Many of the funerary stelae found at Ibrim, especially those
of smali size, have been used by the post-Christian inhabitants of Ibrim for the grinding of corn
with the result that the middle portions of many of the inscriptions have been entirely erased.
Perhaps because of its size the sandstone stele of Bishop Marianos, which measures 70 cm in length
40 cm in width, and has a thickness of 10 cm, escaped this fate. After its removal from its original
position it lay, inscribed face upward, long enough to be covered with a layer of wind borne
dust to escape notice. Its later burial under successive layers of oceupation debris assured its
preservation.

Up to the present it has not proved possible to say whence this stele came. The rough naturę
of the back of the slab indicates that it was not intended to be a free standing monument. On the
analogy of the stelae of the Bishops at Faras it might be expected that this stele was once embed-
ded in the wali of some structure. No evidence has been found to suggest that it was once placed