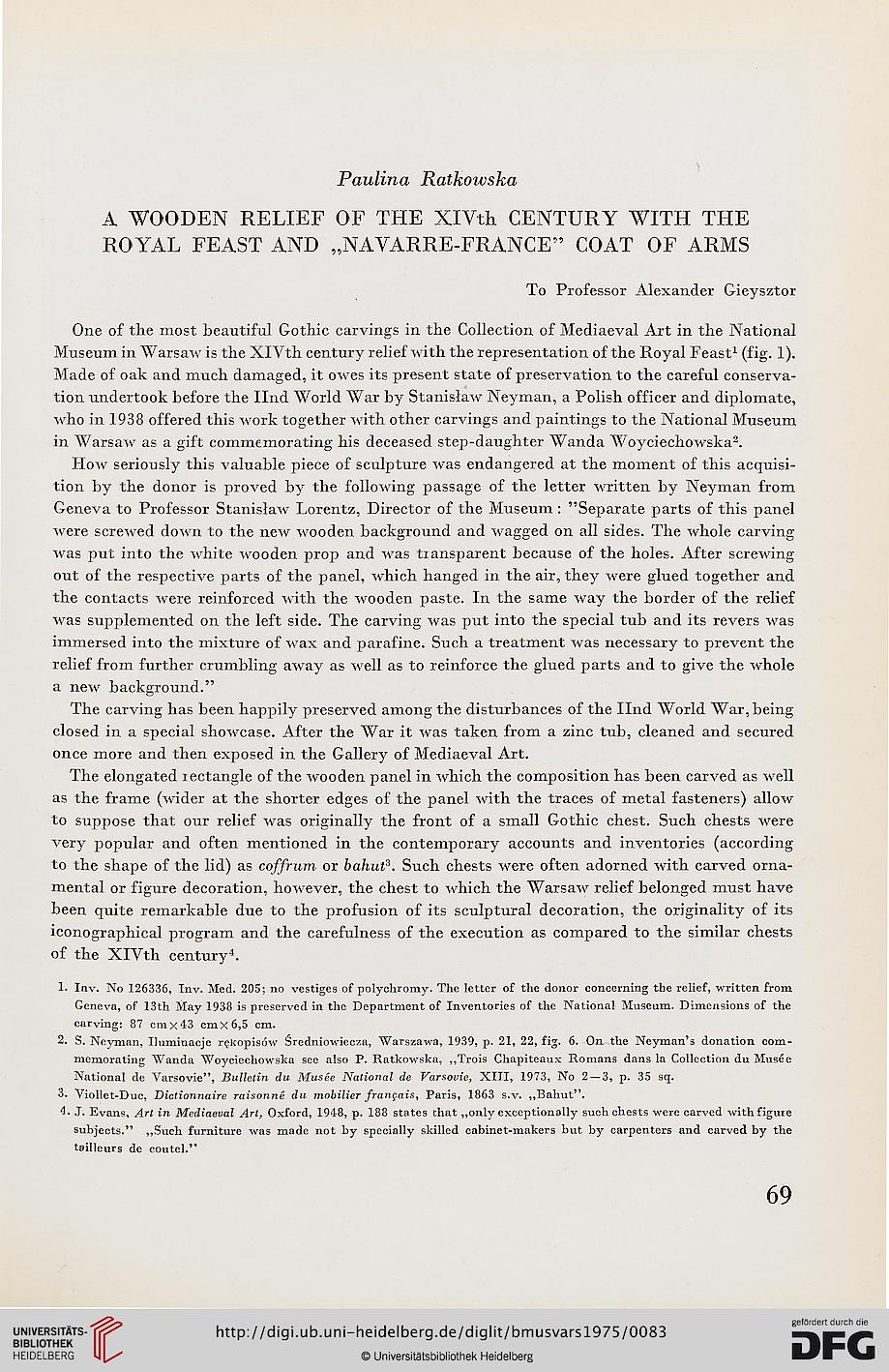 One of the most beautiful Gothic carvings in the Collection of Mediaeval Art in the National
Museum in Warsaw is the XlVth century relief with the representation of the Royal Feast1 (fig. 1).
Made of oak and much damaged, it owes its present state of preservation to the careful conserva-
tion undertook before the Ilnd World War by Stanisław Neyman, a Polish officer and diplomate,
who in 1938 offered this work together with other carvings and paintings to the National Museum
in Warsaw as a gift commemorating his deceased step-daughter Wanda Woyciechowska2.

How seriously this valuable piece of sculpture was endangered at the moment of this acquisi-
tion by the donor is proved by the following passage of the letter written by Neyman from
Geneva to Professor Stanisław Lorentz, Director of the Museum : "Separate parts of this panel
were screwed down to the new wooden background and wagged on all sides. The whole carving
was put into the white wooden prop and was transparent because of the holes. After screwing
out of the respective parts of the panel, which hanged in the air, they were glued together and
the contacts were reinforced with the wooden paste. In the same way the border of the relief
was supplemented on the left side. The carving was put into the special tub and its revers was
immersed into the mixture of wax and parafinę. Such a treatment was necessary to prevent the
relief from further crumbling away as well as to reinforce the glued parts and to give the whole
a new background."

The carving has been happily preserved among the disturbances of the Ilnd World War, being
closed in a special showcase. After the War it was taken from a zinc tub, cleaned and secured
once more and then exposed in the Gallery of Mediaeval Art.

The elongated lectangle of the wooden panel in which the composition has been carved as well
as the frame (wider at the shorter edges of the panel with the traces of metal fasteners) allow
to suppose that our relief was originally the front of a small Gothic chest. Such chests were
very popular and often mentioned in the contemporary accounts and inventories (according
to the shape of the lid) as coffrum or bahufi. Such chests were often adorned with carved orna-
mental or figure decoration, however, the chest to which the Warsaw relief belonged must have
been quite remarkable due to the profusion of its sculptural decoration, the originality of its
iconographical program and the carefulness of the execution as compared to the similar chests
of the XlVth century4.

4. J. Evans, Art in Mediaeval Art, Oxford, 1948, p. 188 States that „only exceptionally such chests were carved with figure
subjects." „Such furniture was made not hy specially skilled cabinet-makers but by carpenters and carved by the
tailleurs de coutel."