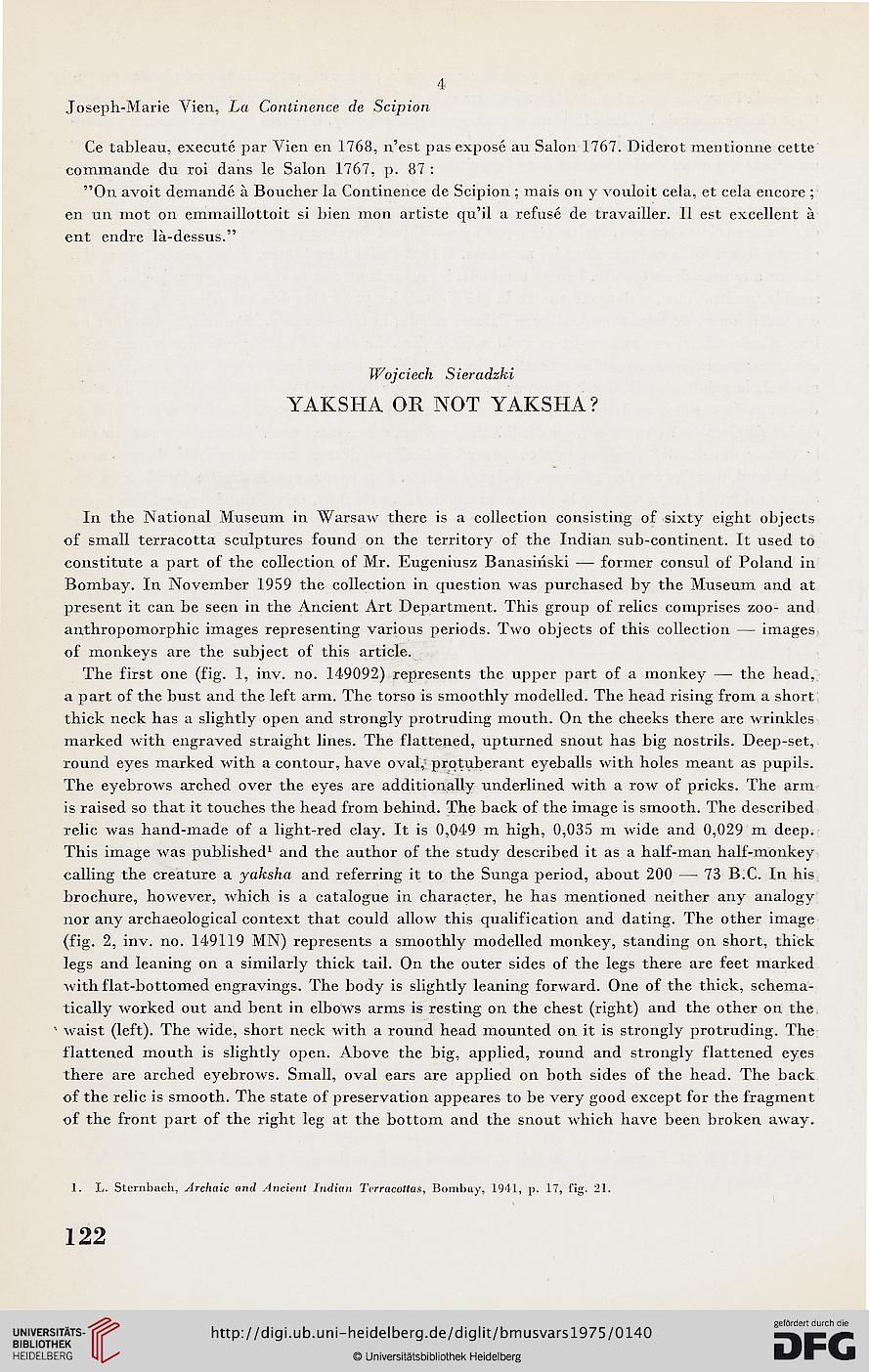 YAK S HA OR NOT YAKSHA?

In the National Museum in Warsaw there is a collection consisting of sixty eight objects
of small terracotta sculptures found on the territory of the Indian sub-continent. It used to
constitute a part of the collection of Mr. Eugeniusz Banasiński — former consul of Poland in
Bombay. In November 1959 the collection in question was purchased by the Museum and at
present it can be seen in the Ancient Art Department. This group of relics comprises zoo- and
anthropomorphic images representing various periods. Two objects of this collection — images
of monkeys are the subject of this article.

The first one (fig. 1, inv. no. 149092) represents the upper part of a monkey — the head,
a part of the bust and the left arm. The torso is smoothly modelled. The head rising from a short
thick neck has a slightly open and strongly protruding mouth. On the cheeks there are wrinkles
marked with engraved straight lines. The flattened, upturned snout has big nostrils. Deep-set,
round eyes marked with a contour, have oval, protuberant eyeballs with holes meant as pupils.
The eyebrows arched over the eyes are additionally underlined with a row of pricks. The arm
is raised so that it touches the head from behind. The back of the image is smooth. The described
relic was hand-made of a light-red clay. It is 0,049 m high, 0,035 m wide and 0,029 m deep.
This image was published1 and the author of the study described it as a half-man half-monkey
calling the creature a yaksha and referring it to the Sunga period, about 200 — 73 B.C. In his
brochure, however, which is a catalogue in character, he has mentioned neither any analogy
nor any archaeological context that could allow this qualification and dating. The other image
(fig. 2, inv. no. 149119 MN) represents a smoothly modelled monkey, standing on short, thick
legs and leaning on a similarly thick tail. On the outer sides of the legs there are feet marked
with flat-bottomed engravings. The body is slightly leaning forward. One of the thick, schema-
tically worked out and bent in elbows arms is resting on the chest (right) and the other on the
waist (left). The wide, short neck with a round head mounted on it is strongly protruding. The
flattened mouth is slightly open. Above the big, applied, round and strongly flattened eyes
there are arched eyebrows. Small, oval ears are applied on both sides of the head. The back
of the relic is smooth. The state of preservation appeares to be very good except for the fragment
of the front part of the right leg at the bottom and the snout which have been broken away.