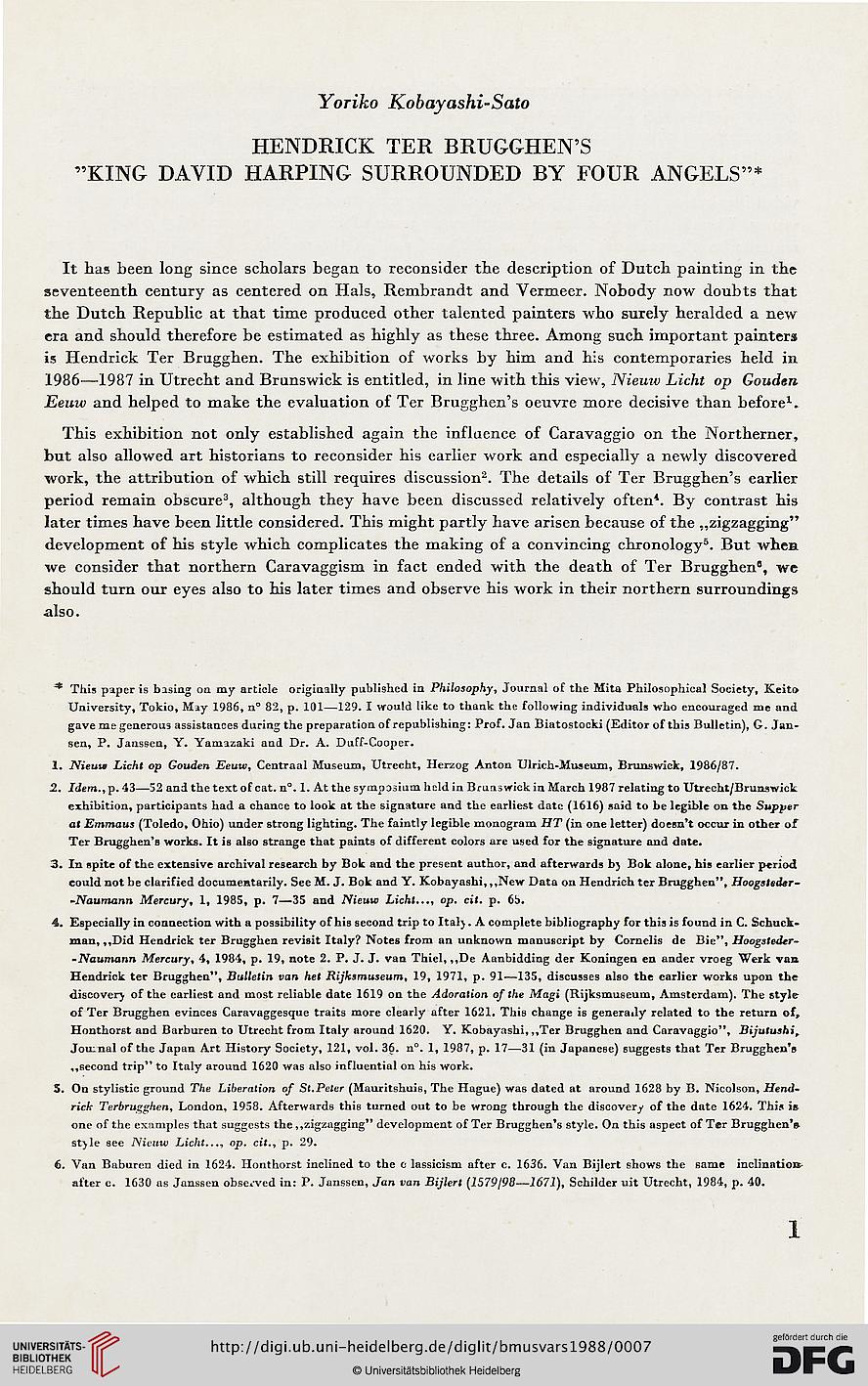 It has been long sińce scholars began to reconsider the description of Dutch painting in thc
scventeenth century as centered on Hals, Rembrandt and Vermeer. Nobody now doubts that
the Dutch Republic at that time produced other talented painters who surely heralded a new
era and should therefore be estimated as highly as these three. Among such important painters
is Hendrick Ter Braggben. The exhibition of works by him and his contemporaries held in
1986—1987 in Utrecht and Brunswick is entitled, in line with this view, Nieuiv Licht op Gouden
Eeuw and helped to make the evaluation of Ter Brugghen's oeuvre more decisive than bęfbre1.

This exhibition not only established again the influence of Caravaggio on the Northerner,
but also allowed art historians to reconsider his earlier work and especially a newly discovered
work, the attribution of which still reąuires discussion2. The details of Ter Brugghen^ earlier
period remain obscure3, although they have been discussed relatively often4. By contrast his
later times have been little considered. This might partly have arisen because of the „zigzagging"
development of his style which complicates the making of a convincing chronology5. But whea
we consider that northern Caravaggism in fact ended with the death of Ter Brugghenc, we
should tura our eyes also to his later times and observe his work in their northern surroundings
also.

* This paper is basing oa my article originally publishcd ia Philosophy, Journal of the Mita Philosophical Society, Keito
University, Tokio, May 1986, n° 82, p. 101—129. I would like to thank the following individuals who encouraged me and
gave me generous assistances during the preparation of republishing: Prof. Jan Białostocki (Editor of this Bulletin), G. Jan-
sen, P. Janssen, Y. Yamazaki and Dr. A. Duff-Cooper.

2. Jrfem.,p. 43—52 and the text of cat. a°. 1. At the sympDiium held in Bruaswick in March 1987 relating to Utrecht/Brunswick
exhibition, participants had a chance to look at the signature and the earliest date (1616) said to be legible on the Supper
at Emmaus (Toledo, Ohio) under strong lighting. The faintly legible monogram HT (in one letter) doesn't oceur in other of
Ter Brugghen's works. It is also strange that paints of different colors are used for the signature and date.

3. In spite of the extensive archival research by Bok and the present author, and afterwards bj Bok alone, his earlier period
could not be clarified documentarily. See M. J. Bok and Y. Kobayashi, „New Data on Hendrich ter Brugghen", Hoogsteder-
-Naumann Mercury, 1, 1985, p. 7—35 and Nieuw Licht..., op. cit. p. 6b.

4. Especially in connection with a possibility of his second trip to Italj. A complete bibliography for this is found in C. Schuek-
man, ,,Did Hendrick ter Brugghen revisit Italy? Notes from an unknown manuBcript by Cornelis dc Bie", Hoogsteder-
-Naumann Mercury, 4, 1984, p. 19, note 2. P. J. J. van Thiel, „De Aanbidding der Koningen en ander vroeg Werk van
Hendrick ter Brugghen", Bulletin van het Rijksmuseum, 19, 1971, p. 91—135, discusses also the earlier works upon the
discovery of the earliest and most reliable date 1619 on the Adoration of the Magi (Rijksmuseum, Amsterdam). The style
of Ter Brugghen evinces Caravaggesque traits more clearly after 1621. This change is generady related to the return of,
Honthorst and Barburen to Utrecht from Italy around 1620. Y. Kobayashi, „Ter Brugghen and Caravaggio", Bijutushi,
Journal of the Japan Art History Society, 121, vol. 36. n°. 1, 1987, p. 17—31 (in Japancse) suggests that Ter Brugghen*s
,,second trip" to Italy around 1620 was also influential on his work.

S- On stylistic ground The Liberation of St.Peter (Mauritshuis, The Hague) was dated at around 1628 by B. Nicolson, Hend-
rick Terbrugghen, London, 1958. Afterwards this turned out to be wrong through the discovery of the date 1624. This i»
one of the examples that suggests the „zigzagging" development of Ter Brugghen*s style. On this aspect of Ter BrugghenV
stjle see Nieuw Licht..., op. cit., p. 29.