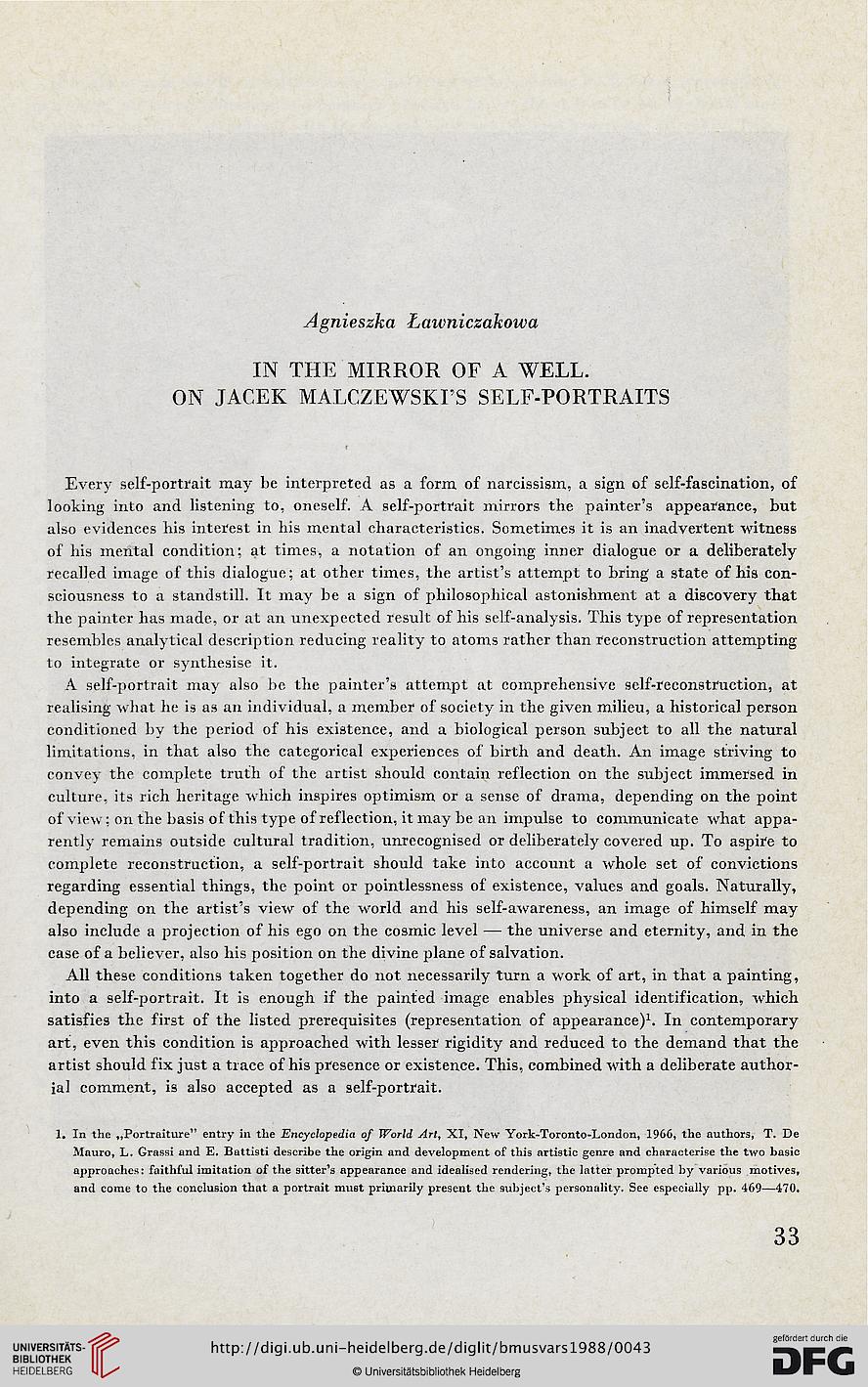 IN THE MIRROR OF A WELL.
ON JACEK MALCZEWSKFS SELF-PORTRAITS

Every self-portrait may be interpretcd as a form of narcissism, a sign of self-fascination, of
Iooking into and listening to, oneself. A self-portrait mirrors the painter's appearance, but
also eviaences his interest in his mental characteristics. Sometimes it is an inadvertent witness
of his mental condition; ąt times, a notation of an ongoing inner dialogue or a deliberately
recalled image of this dialogue; at othcr times, the artist's attempt to bring a state of his con-
sciousness to a stand still. It may be a sign of philosophical astonishment at a discovery that
the painter has made, or at an unexpected result of his self-analysis. This type of representation
resembles analytical description reducing reality to atoms rather than reconstruction attempting
to integrate or synthesise it.

A self-portrait may also be the painter's attempt at comprehensive sclf-reconstruction, at
realising what he is as an individual, a member of soeiety in the given milieu, a historical person
conditioned by the period of his existence, and a biological person subject to all the natural
limitations, in that also the categorical experiences of birth and death. An image striving to
convey the complete truth of the artist should contain reflection on the subject immersed in
culture, its rieh heritage which inspires optimism or a sense of drama, depending on the point
ofview: on the basis of this type of reflection, it may be an impulse to communicate what appa-
rently remains outside cultural tradition, unrccognised or deliberately covered up. To aspire to
complete reconstruction, a self-portrait should take into account a whole set of convictions
regarding essential things, the point or pointlessness of existence, values and goals. Naturally,
depending on the artist's view of the world and his self-awareness, an image of himself may
also include a projection of his ego on the cosmic level — the universe and eternity, and in the
case of a believer, also his position on the divine piane of sa!vation.

All these conditions taken together do not necessarily turn a work of art, in that a painting,
into a self-portrait. It is enough if the painted image enables physical identification, which
satisfies the first of the listed prereąuisites (representation of appearance)1. In contemporary
art, even this condition is approached with lesser rigidity and reduced to the demand that the
artist should f ix just a tiace of his presence or existence. This, combined with a deliberate author-
ial comment, is also accepted as a self-portrait.

1. In the „Portraiture" entry in the Encyclopedia of World Art, XI, New York-Toronto-London, 1966, the authors, T. De
Mauro, L. Grassi and E. Battisti deseribe the origin and deve!opment of this artistic genre and characterise the two basie
approaehes: faithful imitation of the sitterłs appearance and idealised rendering, the latter prompted by various motives,
and come to the conclusion that a portrait must priuiarily present the subject's personality. See especially pp. 469—470.