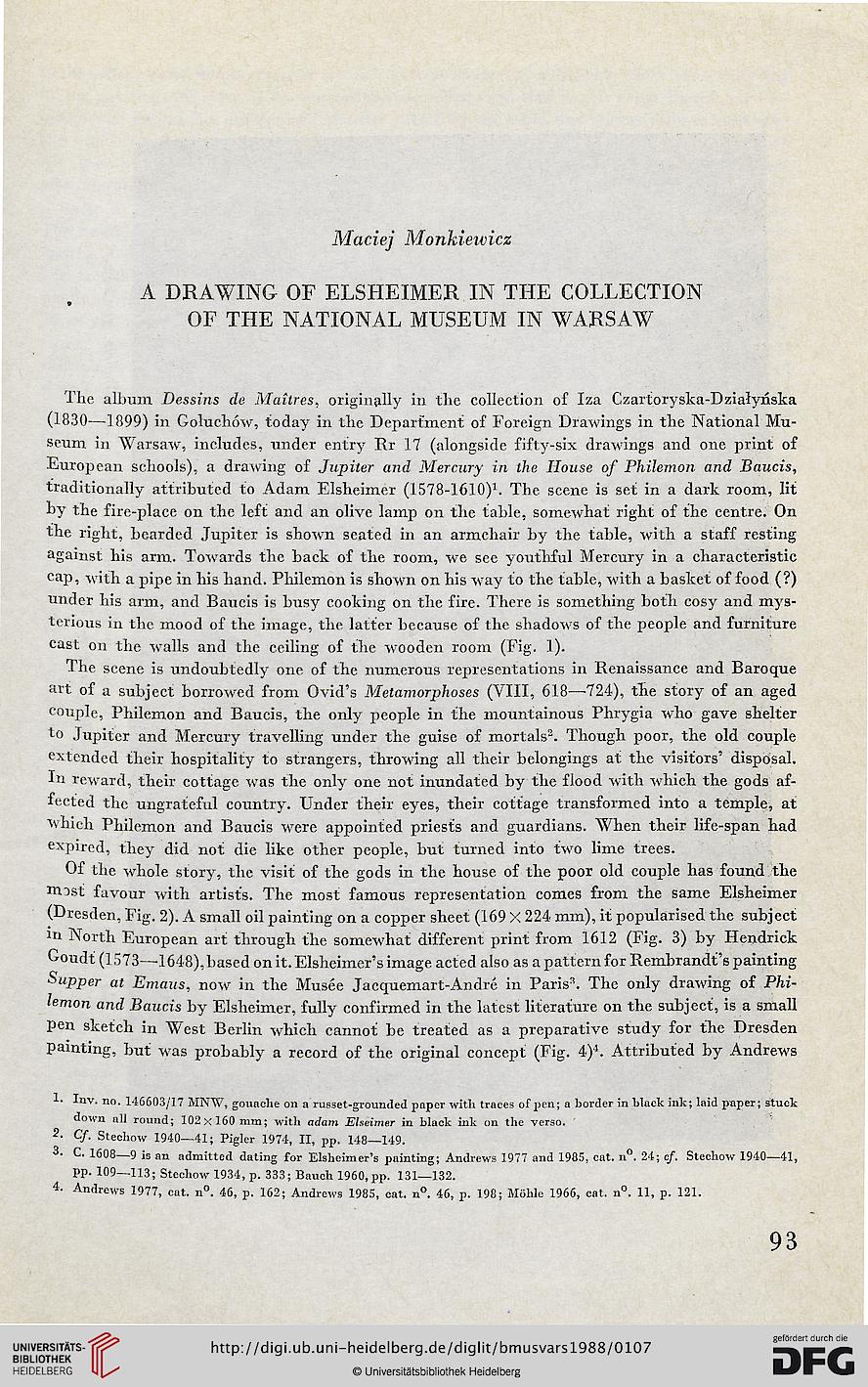 The album Dessins de Małtres, originally in tlie collection of Iza Czartoryska-Działyńska
(1830—1899) in Gołuchów, today hi the Department of Foreign Drawings in the National Mu-
seum in Warsaw, inclutles, under entry Rr 17 (alongside fifty-six drawings and one print of
European schools), a drawing of Jupiter and Mercury in the House of Philemon and Baucis,
traditionally attributed to Adam Elsheimer (1578-1610)1. The scenę is set in a dark room, lit
by the fire-place on the left and an olive lamp on the table, somewhat right of the centrę. On
the right, bearded Jupiter is shown seated in an armchair by the table, with a staff resting
against his arm. Towards the back of the room, we see youthful Mercury in a characteristic
cap, with a pipę in his hand. Philemon is shown on his way to the table, with a basket of food (?)
under his arm, and Baucis is busy cooking on the fire. There is something both cosy and mys-
terious in the mood of the image, the latter because of the shadows of the people and furniture
cast on the walls and the ceiling of the wooden room (Fig. 1).

The scenę is undoubtedly one of the numerous representations in Renaissance and Baroąue
art of a subject borrowed from Ovid's Metamorphoses (VIII, 618—724), the story of an aged
couple, Philemon and Baucis, the only people in the mountainous Phrygia who gave shelter
to Jupiter and Mercury travclling under the guise of mortals2. Though poor, the old couple
extcnded their hospitality to strangers, throwing all their belongings at the visitors' disposal.
In reward, their cottage was the only one not inundated by the flood with which the gods af-
fected the ungrateful country. Under their eyes, their cottage transformed into a tempie, at
■which Philemon and Baucis were appoinfed priests and guardians. When their life-span had
expired, they did not die like other people, but turned into two lime trees.

Of the whole story, the visit of the gods in the house of the poor old couple has found the
most favour with artists. The most famous representation comes from the same Elsheimer
(Dresden, Fig. 2). A smali oil painting on a copper sheet (169 X 224 mm), it popularised the subject
m North European art through the somewhat different print from 1612 (Fig. 3) by Hendrick
Goudt (1573—1648),based on it. Elsheimer's image acted also as a pattern for Rembrandfs painting
Supper at Emaus, now in the Musee Jacquemart-Andre in Pariss. The only drawing of Phi-
lemon and Baucis by Elsheimer, fully confirmed in the latcst literaturę on the subject, is a smali
pen sketch in West Berlin which cannot be treated as a preparative study for the Dresden
painting, buf was probably a record of the original concept (Fig. 4)4. Attributed by Andrews