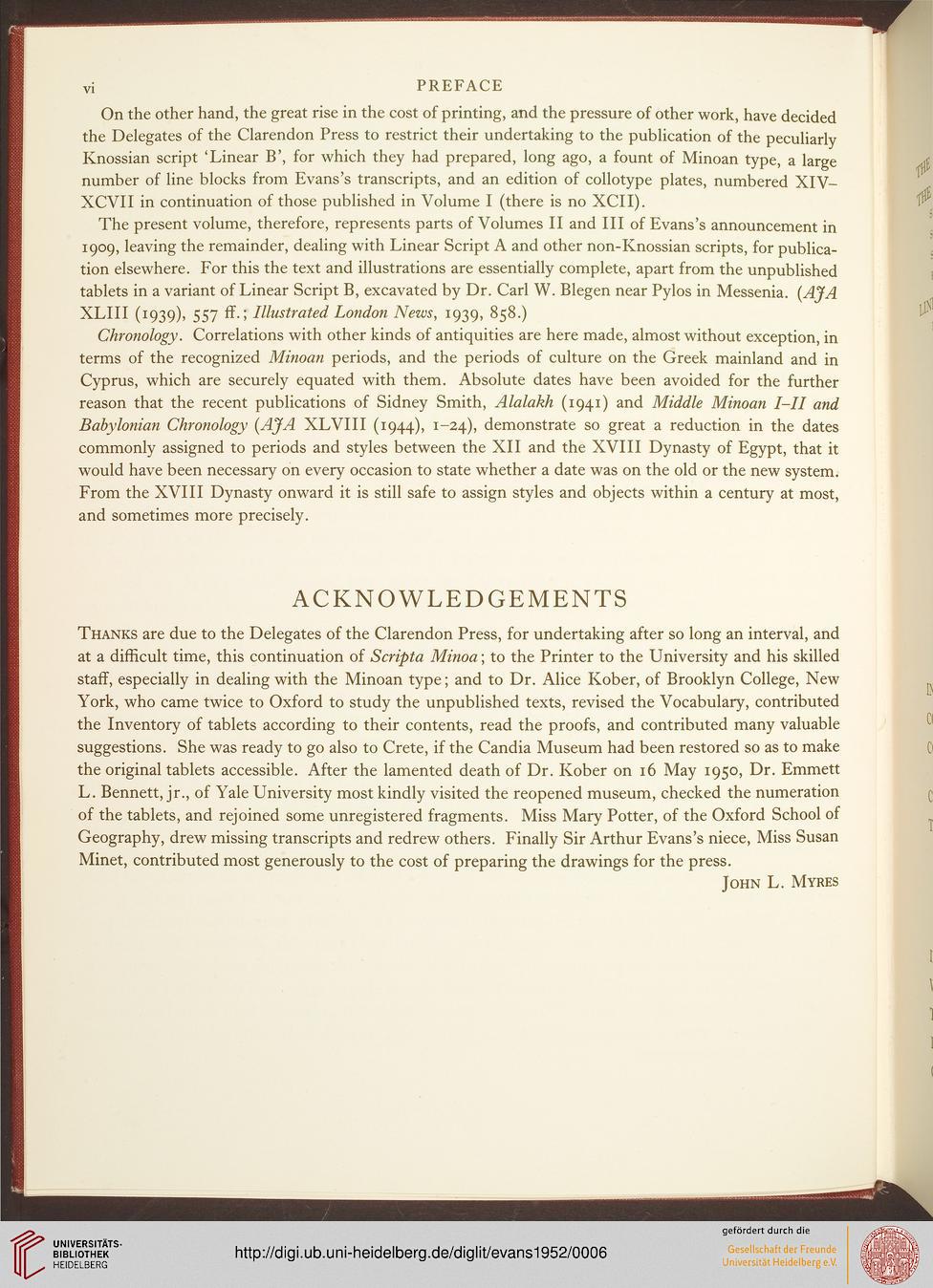 On the other hand, the great rise in the cost of printing, and the pressure of other work, have decided
the Delegates of the Clarendon Press to restrict their undertaking to the publication of the peculiarly
Knossian script 'Linear B', for which they had prepared, long ago, a fount of Minoan type, a large
number of line blocks from Evans's transcripts, and an edition of collotype plates, numbered XIV-
XCVII in continuation of those published in Volume I (there is no XCII).

The present volume, therefore, represents parts of Volumes II and III of Evans's announcement in
1909, leaving the remainder, dealing with Linear Script A and other non-Knossian scripts, for publica-
tion elsewhere. For this the text and illustrations are essentially complete, apart from the unpublished
tablets in a variant of Linear Script B, excavated by Dr. Carl W. Blegen near Pylos in Messenia. (AJA
XLIII (1939), 557 ff.; Illustrated London News, 1939, 858.)

Chronology. Correlations with other kinds of antiquities are here made, almost without exception, in
terms of the recognized Minoan periods, and the periods of culture on the Greek mainland and in
Cyprus, which are securely equated with them. Absolute dates have been avoided for the further
reason that the recent publications of Sidney Smith, Alalakh (1941) and Middle Minoan I-II and
Babylonian Chronology {AJA XLVIII (1944), 1-24), demonstrate so great a reduction in the dates
commonly assigned to periods and styles between the XII and the XVIII Dynasty of Egypt, that it
would have been necessary on every occasion to state whether a date was on the old or the new system.
From the XVIII Dynasty onward it is still safe to assign styles and objects within a century at most,
and sometimes more precisely.

Thanks are due to the Delegates of the Clarendon Press, for undertaking after so long an interval, and
at a difficult time, this continuation of Scripta Minoa; to the Printer to the University and his skilled
staff, especially in dealing with the Minoan type; and to Dr. Alice Kober, of Brooklyn College, New
York, who came twice to Oxford to study the unpublished texts, revised the Vocabulary, contributed
the Inventory of tablets according to their contents, read the proofs, and contributed many valuable
suggestions. She was ready to go also to Crete, if the Candia Museum had been restored so as to make
the original tablets accessible. After the lamented death of Dr. Kober on 16 May 1950, Dr. Emmett
L. Bennett, jr., of Yale University most kindly visited the reopened museum, checked the numeration
of the tablets, and rejoined some unregistered fragments. Miss Mary Potter, of the Oxford School of
Geography, drew missing transcripts and redrew others. Finally Sir Arthur Evans's niece, Miss Susan
Minet, contributed most generously to the cost of preparing the drawings for the press.