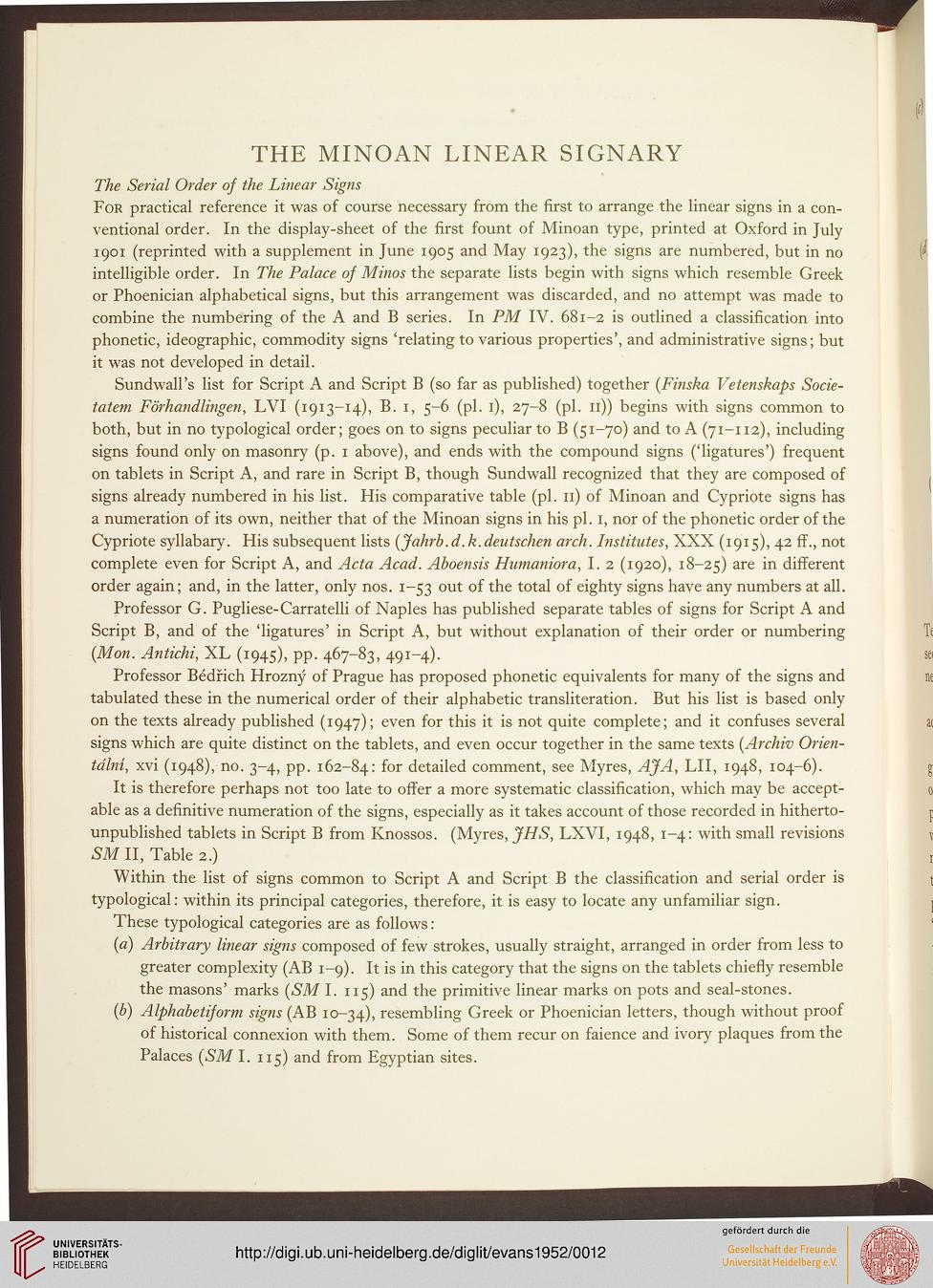 The Serial Order of the Linear Signs

For practical reference it was of course necessary from the first to arrange the linear signs in a con-
ventional order. In the display-sheet of the first fount of Minoan type, printed at Oxford in July
1901 (reprinted with a supplement in June 1905 and May 1923), the signs are numbered, but in no
intelligible order. In The Palace of Minos the separate lists begin with signs which resemble Greek
or Phoenician alphabetical signs, but this arrangement was discarded, and no attempt was made to
combine the numbering of the A and B series. In PM IV. 681-2 is outlined a classification into
phonetic, ideographic, commodity signs 'relating to various properties', and administrative signs; but
it was not developed in detail.

Sundwall's list for Script A and Script B (so far as published) together (Finska Vetenskaps Socie-
tatem Forhandlingen, LVI (1913-14), B. 1, 5-6 (pi. 1), 27-8 (pi. 11)) begins with signs common to
both, but in no typological order; goes on to signs peculiar to B (51-70) and to A (71-112), including
signs found only on masonry (p. 1 above), and ends with the compound signs ('ligatures') frequent
on tablets in Script A, and rare in Script B, though Sundwall recognized that they are composed of
signs already numbered in his list. His comparative table (pi. 11) of Minoan and Cypriote signs has
a numeration of its own, neither that of the Minoan signs in his pi. 1, nor of the phonetic order of the
Cypriote syllabary. His subsequent lists (Jahrb.d.k.deutschen arch. Institutes, XXX (1915), 42 ff., not
complete even for Script A, and Acta Acad. Aboensis Humaniora, I. 2 (1920), 18-25) are m different
order again; and, in the latter, only nos. 1-53 out of the total of eighty signs have any numbers at all.

Professor G. Pugliese-Carratelli of Naples has published separate tables of signs for Script A and
Script B, and of the 'ligatures' in Script A, but without explanation of their order or numbering
(Mon. Antichi, XL (1945), pp. 467-83, 491-4).

Professor Bedfich Hrozny of Prague has proposed phonetic equivalents for many of the signs and
tabulated these in the numerical order of their alphabetic transliteration. But his list is based only
on the texts already published (1947); even for this it is not quite complete; and it confuses several
signs which are quite distinct on the tablets, and even occur together in the same texts (Archiv Orien-
tdlni, xvi (1948), no. 3-4, pp. 162-84: for detailed comment, see Myres, AJA, LII, 1948, 104-6).

It is therefore perhaps not too late to offer a more systematic classification, which may be accept-
able as a definitive numeration of the signs, especially as it takes account of those recorded in hitherto-
unpublished tablets in Script B from Knossos. (Myres, JHS, LXVI, 1948, 1-4: with small revisions
SM II, Table 2.)

Within the list of signs common to Script A and Script B the classification and serial order is
typological: within its principal categories, therefore, it is easy to locate any unfamiliar sign.

These typological categories are as follows:

(a) Arbitrary linear signs composed of few strokes, usually straight, arranged in order from less to
greater complexity (AB 1-9). It is in this category that the signs on the tablets chiefly resemble
the masons' marks {SM I. 115) and the primitive linear marks on pots and seal-stones.

(b) Alphabetiform signs (AB 10-34), resembling Greek or Phoenician letters, though without proof
of historical connexion with them. Some of them recur on faience and ivory plaques from the
Palaces (SM I. 115) and from Egyptian sites.