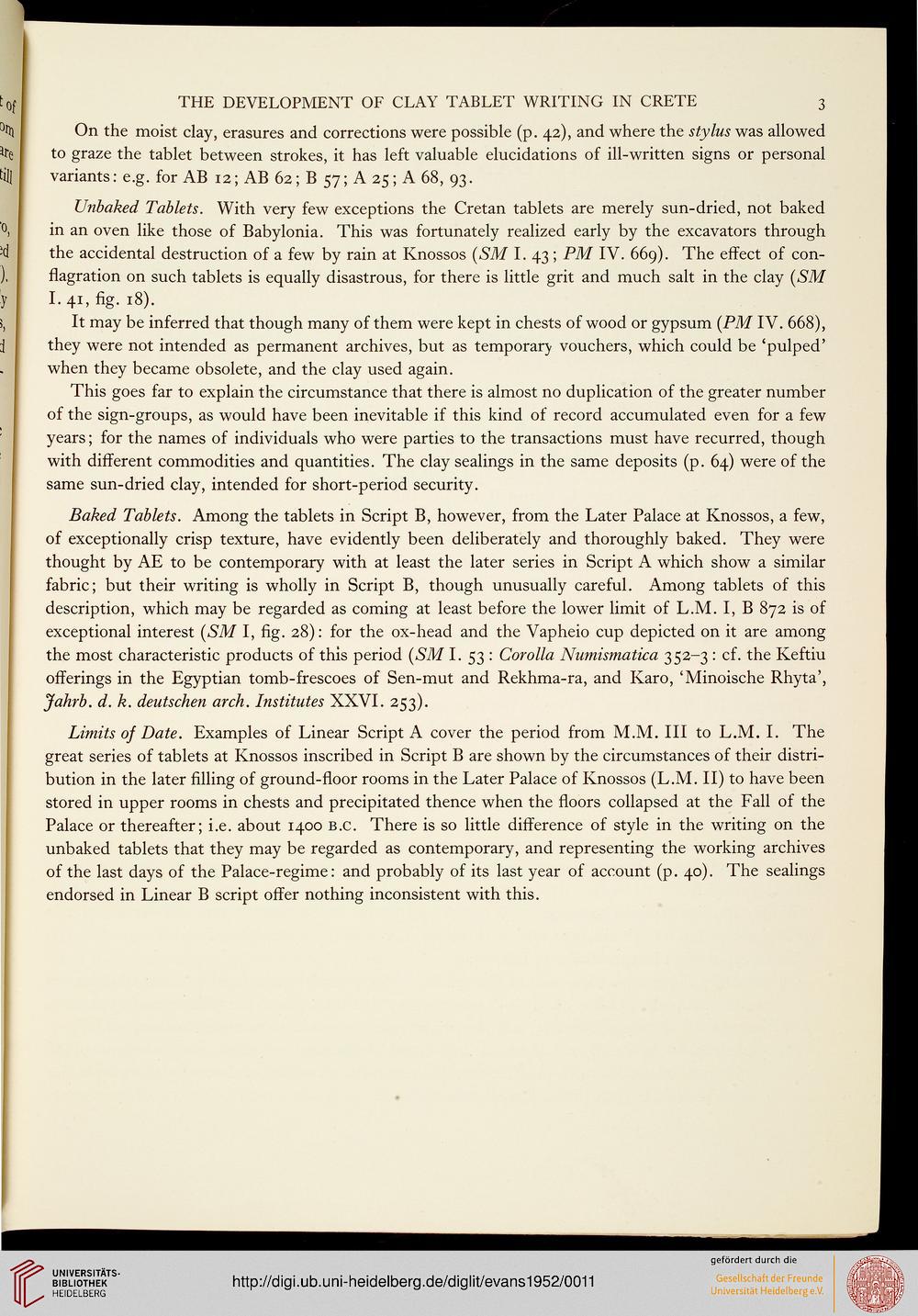 On the moist clay, erasures and corrections were possible (p. 42), and where the stylus was allowed
to graze the tablet between strokes, it has left valuable elucidations of ill-written signs or personal
variants: e.g. for AB 12; AB 62; B 57; A 25; A 68, 93.

Unbaked Tablets. With very few exceptions the Cretan tablets are merely sun-dried, not baked
in an oven like those of Babylonia. This was fortunately realized early by the excavators through
the accidental destruction of a few by rain at Knossos (SM I. 43; PM IV. 669). The effect of con-
flagration on such tablets is equally disastrous, for there is little grit and much salt in the clay (SM
I. 41, fig. 18).

It may be inferred that though many of them were kept in chests of wood or gypsum (PM IV. 668),
they were not intended as permanent archives, but as temporary vouchers, which could be 'pulped'
when they became obsolete, and the clay used again.

This goes far to explain the circumstance that there is almost no duplication of the greater number
of the sign-groups, as would have been inevitable if this kind of record accumulated even for a few
years; for the names of individuals who were parties to the transactions must have recurred, though
with different commodities and quantities. The clay sealings in the same deposits (p. 64) were of the
same sun-dried clay, intended for short-period security.

Baked Tablets. Among the tablets in Script B, however, from the Later Palace at Knossos, a few,
of exceptionally crisp texture, have evidently been deliberately and thoroughly baked. They were
thought by AE to be contemporary with at least the later series in Script A which show a similar
fabric; but their writing is wholly in Script B, though unusually careful. Among tablets of this
description, which may be regarded as coming at least before the lower limit of L.M. I, B 872 is of
exceptional interest (SM I, fig. 28): for the ox-head and the Vapheio cup depicted on it are among
the most characteristic products of this period (SM I. 53 : Corolla Numismatica 352-3 : cf. the Keftiu
offerings in the Egyptian tomb-frescoes of Sen-mut and Rekhma-ra, and Karo, 'Minoische Rhyta',
Jahrb. d. k. deutschen arch. Institutes XXVI. 253).

Limits of Date. Examples of Linear Script A cover the period from M.M. Ill to L.M. I. The
great series of tablets at Knossos inscribed in Script B are shown by the circumstances of their distri-
bution in the later filling of ground-floor rooms in the Later Palace of Knossos (L.M. II) to have been
stored in upper rooms in chests and precipitated thence when the floors collapsed at the Fall of the
Palace or thereafter; i.e. about 1400 B.C. There is so little difference of style in the writing on the
unbaked tablets that they may be regarded as contemporary, and representing the working archives
of the last days of the Palace-regime: and probably of its last year of account (p. 40). The sealings
endorsed in Linear B script offer nothing inconsistent with this.