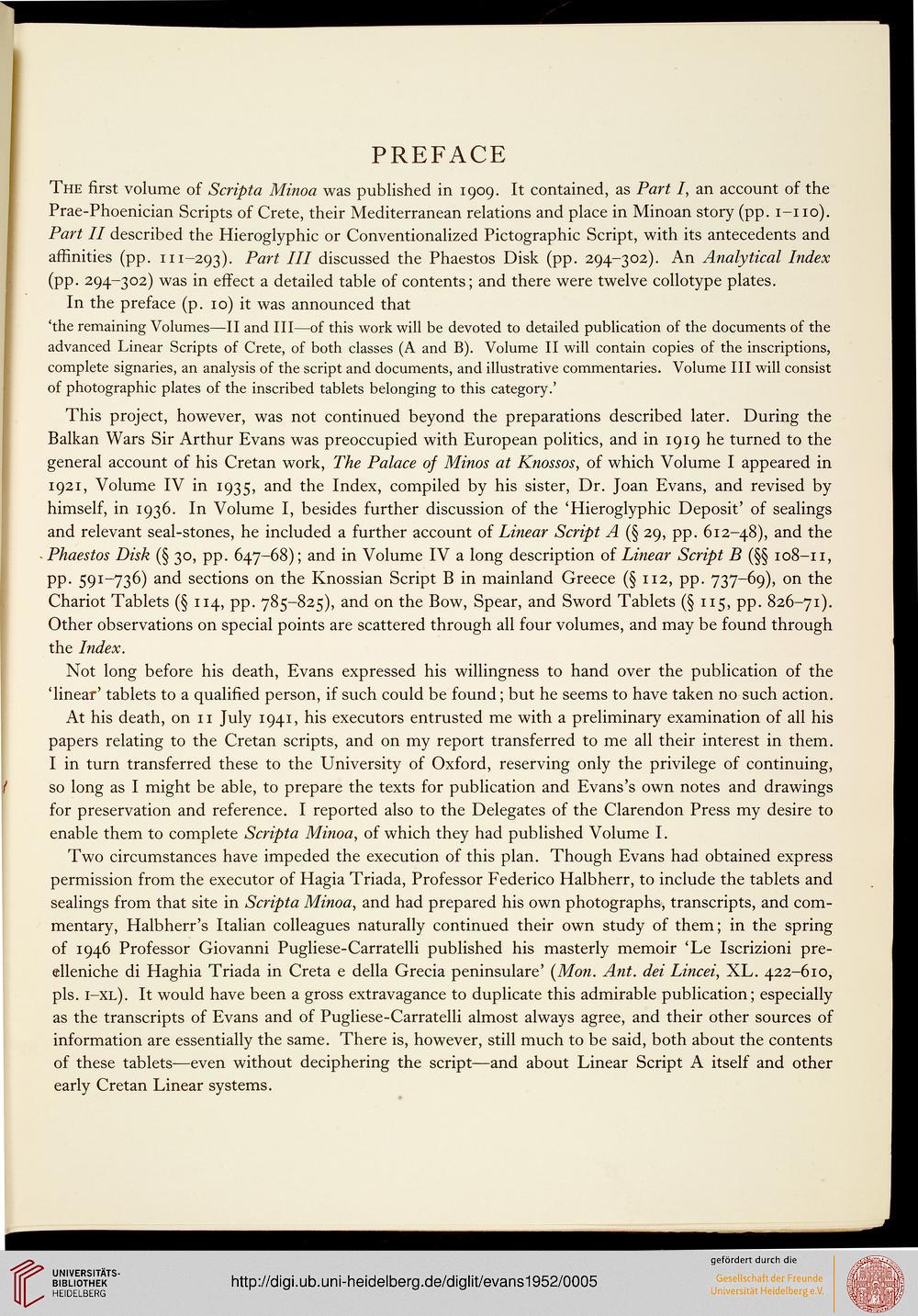 The first volume of Scripta Minoa was published in 1909. It contained, as Part I, an account of the
Prae-Phoenician Scripts of Crete, their Mediterranean relations and place in Minoan story (pp. 1-110).
Part II described the Hieroglyphic or Conventionalized Pictographic Script, with its antecedents and
affinities (pp. 111-293). Part HI discussed the Phaestos Disk (pp. 294-302). An Analytical Index
(pp. 294-302) was in effect a detailed table of contents; and there were twelve collotype plates.

In the preface (p. 10) it was announced that
'the remaining Volumes—II and III—of this work will be devoted to detailed publication of the documents of the
advanced Linear Scripts of Crete, of both classes (A and B). Volume II will contain copies of the inscriptions,
complete signaries, an analysis of the script and documents, and illustrative commentaries. Volume III will consist
of photographic plates of the inscribed tablets belonging to this category.'

Not long before his death, Evans expressed his willingness to hand over the publication of the
'linear' tablets to a qualified person, if such could be found; but he seems to have taken no such action.
At his death, on 11 July 1941, his executors entrusted me with a preliminary examination of all his
papers relating to the Cretan scripts, and on my report transferred to me all their interest in them.
I in turn transferred these to the University of Oxford, reserving only the privilege of continuing,
so long as I might be able, to prepare the texts for publication and Evans's own notes and drawings
for preservation and reference. I reported also to the Delegates of the Clarendon Press my desire to
enable them to complete Scripta Minoa, of which they had published Volume I.

Two circumstances have impeded the execution of this plan. Though Evans had obtained express
permission from the executor of Hagia Triada, Professor Federico Halbherr, to include the tablets and
sealings from that site in Scripta Minoa, and had prepared his own photographs, transcripts, and com-
mentary, Halbherr's Italian colleagues naturally continued their own study of them; in the spring
of 1946 Professor Giovanni Pugliese-Carratelli published his masterly memoir 'Le Iscrizioni pre-
elleniche di Haghia Triada in Creta e della Grecia peninsulare' (Mon. Ant. dei Lincei, XL. 422-610,
pis. i-xl). It would have been a gross extravagance to duplicate this admirable publication; especially
as the transcripts of Evans and of Pugliese-Carratelli almost always agree, and their other sources of
information are essentially the same. There is, however, still much to be said, both about the contents
of these tablets—even without deciphering the script—and about Linear Script A itself and other
early Cretan Linear systems.