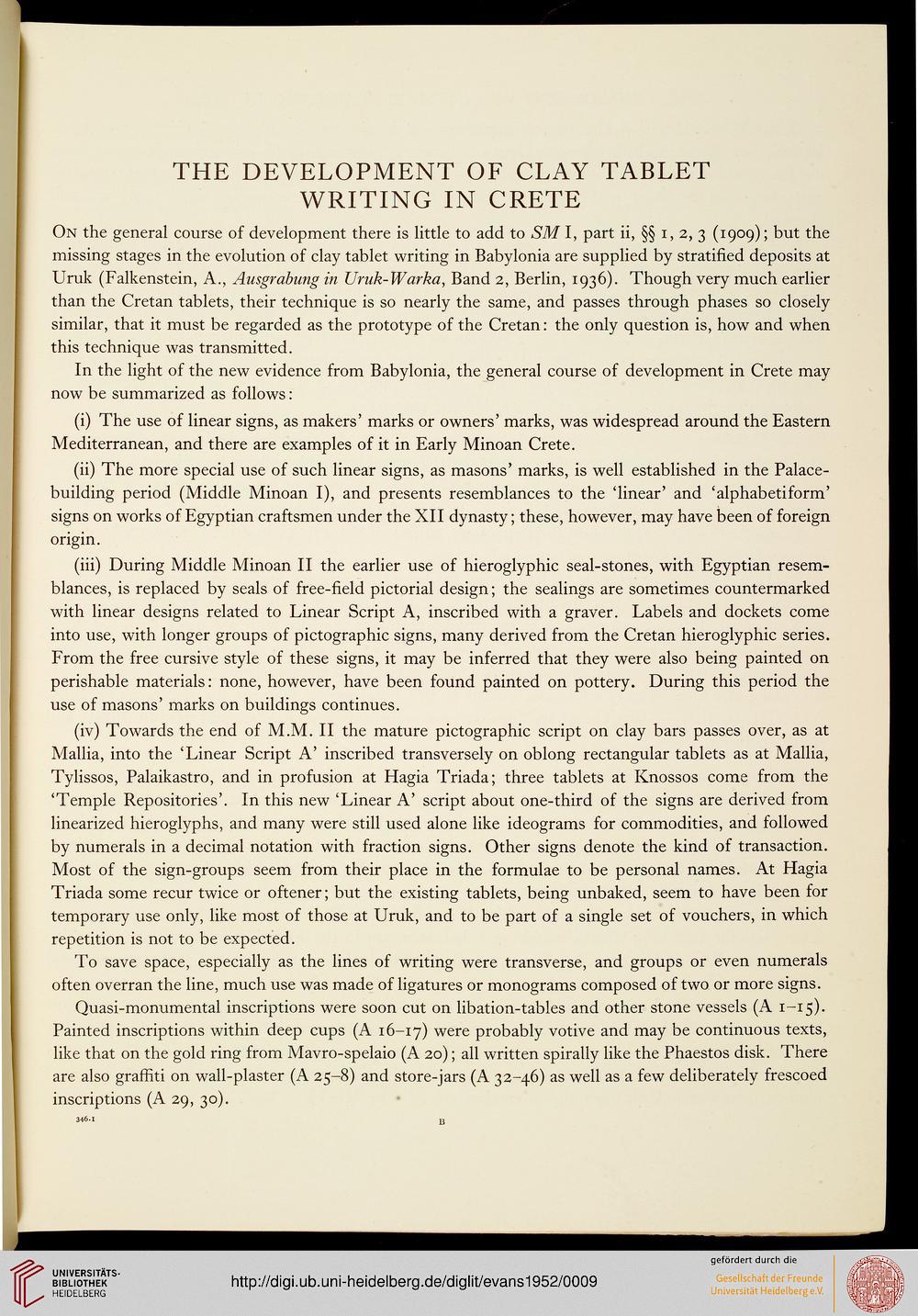 On the general course of development there is little to add to SM I, part ii, §§ i, 2, 3 (1909); but the
missing stages in the evolution of clay tablet writing in Babylonia are supplied by stratified deposits at
Uruk (Falkenstein, A., Ausgrabung in Uruk-Warka, Band 2, Berlin, 1936). Though very much earlier
than the Cretan tablets, their technique is so nearly the same, and passes through phases so closely
similar, that it must be regarded as the prototype of the Cretan: the only question is, how and when
this technique was transmitted.

In the light of the new evidence from Babylonia, the general course of development in Crete may
now be summarized as follows:

(i) The use of linear signs, as makers' marks or owners' marks, was widespread around the Eastern
Mediterranean, and there are examples of it in Early Minoan Crete.

(ii) The more special use of such linear signs, as masons' marks, is well established in the Palace-
building period (Middle Minoan I), and presents resemblances to the 'linear' and 'alphabetiform'
signs on works of Egyptian craftsmen under the XII dynasty; these, however, may have been of foreign
origin.

(iii) During Middle Minoan II the earlier use of hieroglyphic seal-stones, with Egyptian resem-
blances, is replaced by seals of free-field pictorial design; the sealings are sometimes countermarked
with linear designs related to Linear Script A, inscribed with a graver. Labels and dockets come
into use, with longer groups of pictographic signs, many derived from the Cretan hieroglyphic series.
From the free cursive style of these signs, it may be inferred that they were also being painted on
perishable materials: none, however, have been found painted on pottery. During this period the
use of masons' marks on buildings continues.

(iv) Towards the end of M.M. II the mature pictographic script on clay bars passes over, as at
Mallia, into the 'Linear Script A' inscribed transversely on oblong rectangular tablets as at Mallia,
Tylissos, Palaikastro, and in profusion at Hagia Triada; three tablets at Knossos come from the
'Temple Repositories'. In this new 'Linear A' script about one-third of the signs are derived from
linearized hieroglyphs, and many were still used alone like ideograms for commodities, and followed
by numerals in a decimal notation with fraction signs. Other signs denote the kind of transaction.
Most of the sign-groups seem from their place in the formulae to be personal names. At Hagia
Triada some recur twice or oftener; but the existing tablets, being unbaked, seem to have been for
temporary use only, like most of those at Uruk, and to be part of a single set of vouchers, in which
repetition is not to be expected.

To save space, especially as the lines of writing were transverse, and groups or even numerals
often overran the line, much use was made of ligatures or monograms composed of two or more signs.

Quasi-monumental inscriptions were soon cut on libation-tables and other stone vessels (A 1-15)-
Painted inscriptions within deep cups (A 16-17) were probably votive and may be continuous texts,
like that on the gold ring from Mavro-spelaio (A 20); all written spirally like the Phaestos disk. There
are also graffiti on wall-plaster (A 25-8) and store-jars (A 32-46) as well as a few deliberately frescoed