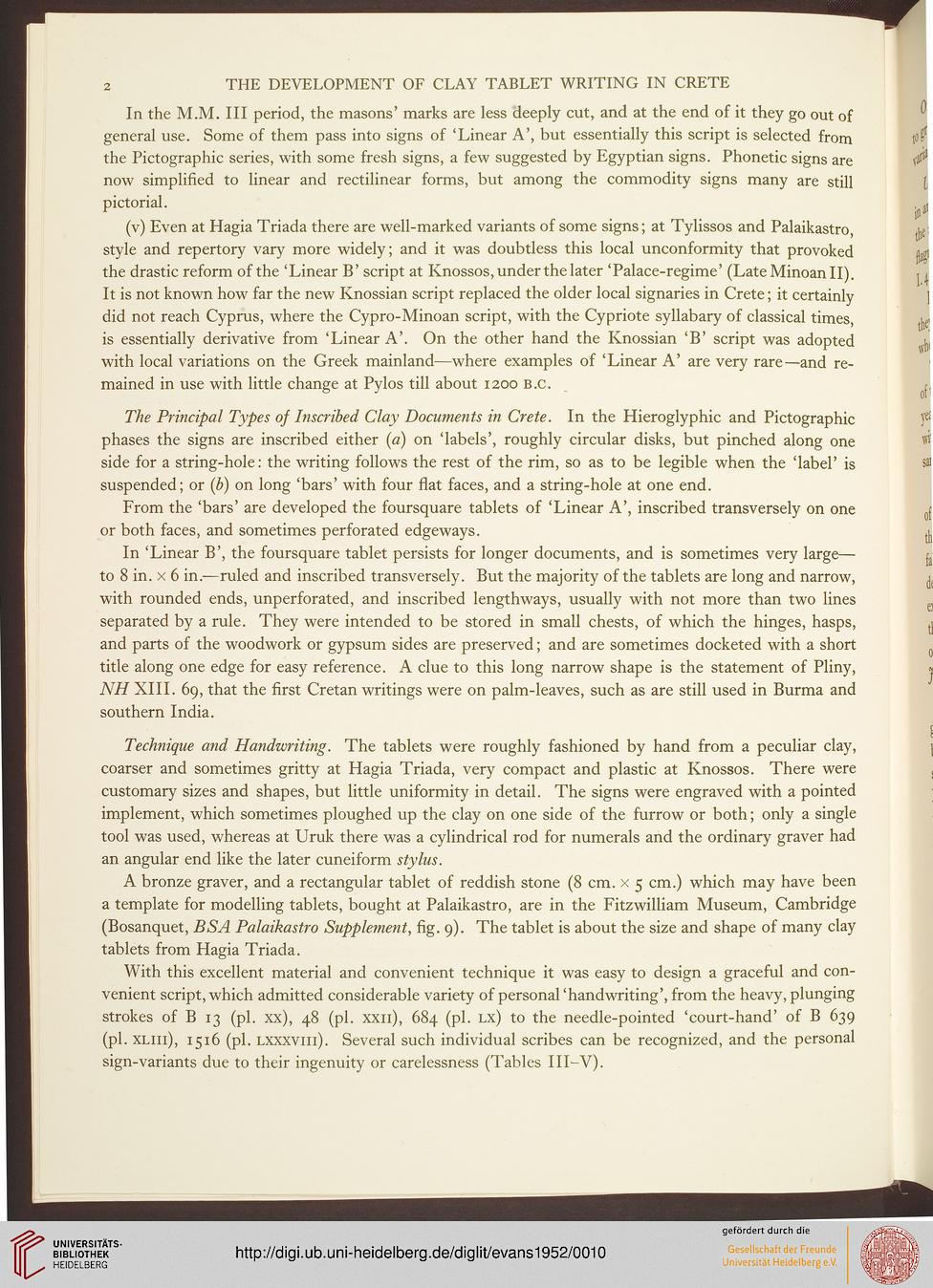 In the M.M. Ill period, the masons' marks are less deeply cut, and at the end of it they go out of
general use. Some of them pass into signs of 'Linear A', but essentially this script is selected from
the Pictographic series, with some fresh signs, a few suggested by Egyptian signs. Phonetic signs are
now simplified to linear and rectilinear forms, but among the commodity signs many are still
pictorial.

(v) Even at Hagia Triada there are well-marked variants of some signs; at Tylissos and Palaikastro
style and repertory vary more widely; and it was doubtless this local unconformity that provoked
the drastic reform of the 'Linear B' script at Knossos, under the later 'Palace-regime' (LateMinoanll).
It is not known how far the new Knossian script replaced the older local signaries in Crete; it certainly
did not reach Cyprus, where the Cypro-Minoan script, with the Cypriote syllabary of classical times,
is essentially derivative from 'Linear A'. On the other hand the Knossian 'B' script was adopted
with local variations on the Greek mainland—where examples of 'Linear A' are very rare—and re-
mained in use with little change at Pylos till about 1200 B.C.

The Principal Types of Inscribed Clay Documents in Crete. In the Hieroglyphic and Pictographic
phases the signs are inscribed either (a) on 'labels', roughly circular disks, but pinched along one
side for a string-hole: the writing follows the rest of the rim, so as to be legible when the 'label' is
suspended; or (b) on long 'bars' with four flat faces, and a string-hole at one end.

From the 'bars' are developed the foursquare tablets of 'Linear A', inscribed transversely on one
or both faces, and sometimes perforated edgeways.

In 'Linear B', the foursquare tablet persists for longer documents, and is sometimes very large—
to 8 in. x 6 in.—ruled and inscribed transversely. But the majority of the tablets are long and narrow,
with rounded ends, unperforated, and inscribed lengthways, usually with not more than two lines
separated by a rule. They were intended to be stored in small chests, of which the hinges, hasps,
and parts of the woodwork or gypsum sides are preserved; and are sometimes docketed with a short
title along one edge for easy reference. A clue to this long narrow shape is the statement of Pliny,
NH XIII. 69, that the first Cretan writings were on palm-leaves, such as are still used in Burma and
southern India.

Technique and Handwriting. The tablets were roughly fashioned by hand from a peculiar clay,
coarser and sometimes gritty at Hagia Triada, very compact and plastic at Knossos. There were
customary sizes and shapes, but little uniformity in detail. The signs were engraved with a pointed
implement, which sometimes ploughed up the clay on one side of the furrow or both; only a single
tool was used, whereas at Uruk there was a cylindrical rod for numerals and the ordinary graver had
an angular end like the later cuneiform stylus.

A bronze graver, and a rectangular tablet of reddish stone (8 cm. x 5 cm.) which may have been
a template for modelling tablets, bought at Palaikastro, are in the Fitzwilliam Museum, Cambridge
(Bosanquet, BSA Palaikastro Supplement, fig. 9). The tablet is about the size and shape of many clay
tablets from Hagia Triada.

With this excellent material and convenient technique it was easy to design a graceful and con-
venient script, which admitted considerable variety of personal 'handwriting', from the heavy, plunging
strokes of B 13 (pi. xx), 48 (pi. xxn), 684 (pi. lx) to the needle-pointed 'court-hand' of B 639
(pi. xliii), 1516 (pi. lxxxviii). Several such individual scribes can be recognized, and the personal
sign-variants due to their ingenuity or carelessness (Tables III^V).