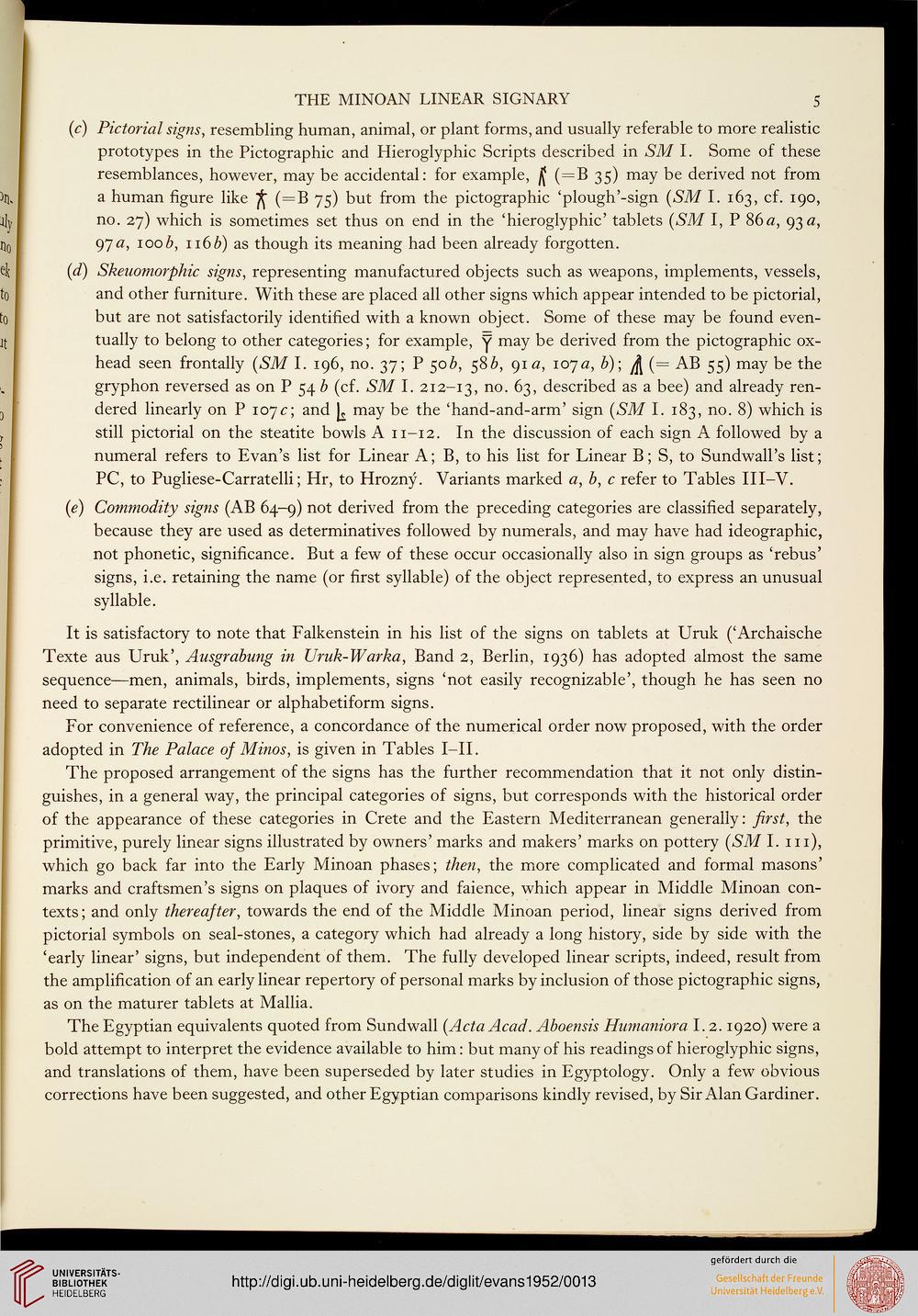 (c) Pictorial signs, resembling human, animal, or plant forms, and usually referable to more realistic
prototypes in the Pictographic and Hieroglyphic Scripts described in SM I. Some of these
resemblances, however, may be accidental: for example, jf (=B 35) may be derived not from
a human figure like ^ (=B 75) but from the pictographic 'plough'-sign (SM I. 163, cf. 190,
no. 27) which is sometimes set thus on end in the 'hieroglyphic' tablets (SM I, P 86a, 93 a,
97a, 100 b, 116 b) as though its meaning had been already forgotten.

(d) Skeuomorphic signs, representing manufactured objects such as weapons, implements, vessels,
and other furniture. With these are placed all other signs which appear intended to be pictorial,
but are not satisfactorily identified with a known object. Some of these may be found even-
tually to belong to other categories; for example, v may be derived from the pictographic ox-
head seen frontally (SM I. 196, no. 37; P 506, 586, 91a, 107*2, b); fa (= AB 55) may be the
gryphon reversed as on P 54 b (cf. SM I. 212-13, no. 63, described as a bee) and already ren-
dered linearly on P 107c; and k. may be the 'hand-and-arm' sign (SM I. 183, no. 8) which is
still pictorial on the steatite bowls A 11-12. In the discussion of each sign A followed by a
numeral refers to Evan's list for Linear A; B, to his list for Linear B; S, to Sundwall's list;
PC, to Pugliese-Carratelli; Hr, to Hrozny. Variants marked a, b, c refer to Tables III-V.

(e) Commodity signs (AB 64-9) not derived from the preceding categories are classified separately,
because they are used as determinatives followed by numerals, and may have had ideographic,
not phonetic, significance. But a few of these occur occasionally also in sign groups as 'rebus'
signs, i.e. retaining the name (or first syllable) of the object represented, to express an unusual
syllable.

It is satisfactory to note that Falkenstein in his list of the signs on tablets at Uruk ('Archaische
Texte aus Uruk', Ausgrabung in Uruk-Warka, Band 2, Berlin, 1936) has adopted almost the same
sequence—men, animals, birds, implements, signs 'not easily recognizable', though he has seen no
need to separate rectilinear or alphabetiform signs.

For convenience of reference, a concordance of the numerical order now proposed, with the order
adopted in The Palace of Minos, is given in Tables I—II.

The proposed arrangement of the signs has the further recommendation that it not only distin-
guishes, in a general way, the principal categories of signs, but corresponds with the historical order
of the appearance of these categories in Crete and the Eastern Mediterranean generally: first, the
primitive, purely linear signs illustrated by owners' marks and makers' marks on pottery (SM I. in),
which go back far into the Early Minoan phases; then, the more complicated and formal masons'
marks and craftsmen's signs on plaques of ivory and faience, which appear in Middle Minoan con-
texts ; and only thereafter, towards the end of the Middle Minoan period, linear signs derived from
pictorial symbols on seal-stones, a category which had already a long history, side by side with the
'early linear' signs, but independent of them. The fully developed linear scripts, indeed, result from
the amplification of an early linear repertory of personal marks by inclusion of those pictographic signs,
as on the maturer tablets at Mallia.

The Egyptian equivalents quoted from Sundwall (Acta Acad. Aboensis Humaniora 1.2.1920) were a
bold attempt to interpret the evidence available to him: but many of his readings of hieroglyphic signs,
and translations of them, have been superseded by later studies in Egyptology. Only a few obvious
corrections have been suggested, and other Egyptian comparisons kindly revised, by Sir Alan Gardiner.