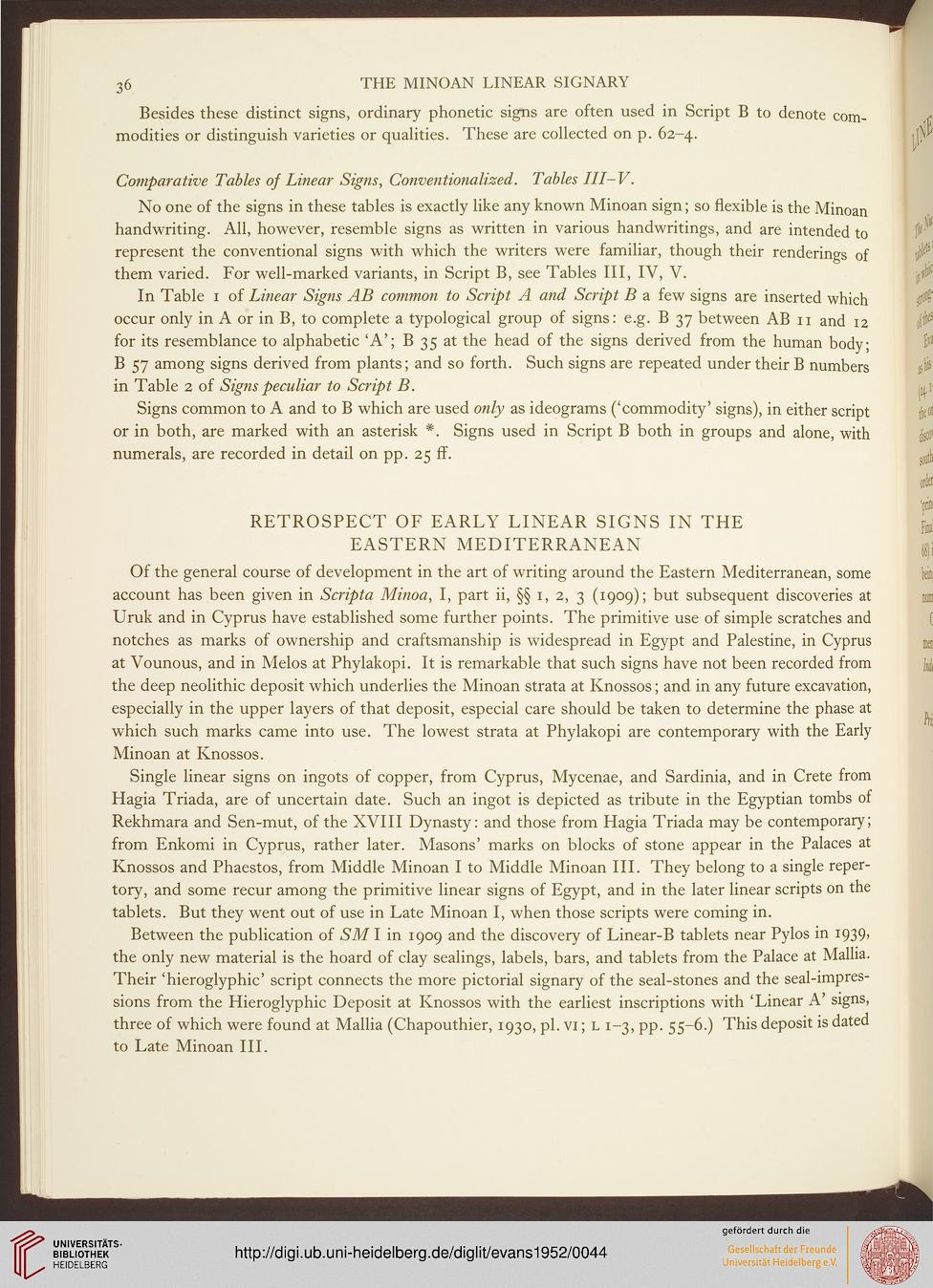 Besides these distinct signs, ordinary phonetic signs are often used in Script B to denote com-
modities or distinguish varieties or qualities. These are collected on p. 62-4.

No one of the signs in these tables is exactly like any known Minoan sign; so flexible is the Minoan
handwriting. All, however, resemble signs as written in various handwritings, and are intended to
represent the conventional signs with which the writers were familiar, though their renderings of
them varied. For well-marked variants, in Script B, see Tables III, IV, V.

In Table 1 of Linear Signs AB common to Script A and Script B a. few signs are inserted which
occur only in A or in B, to complete a typological group of signs: e.g. B 37 between AB 11 and 12
for its resemblance to alphabetic 'A'; B 35 at the head of the signs derived from the human body
B 57 among signs derived from plants; and so forth. Such signs are repeated under their B numbers
in Table 2 of Signs peculiar to Script B.

Signs common to A and to B which are used only as ideograms ('commodity' signs), in either script
or in both, are marked with an asterisk *. Signs used in Script B both in groups and alone, with
numerals, are recorded in detail on pp. 25 ff.

RETROSPECT OF EARLY LINEAR SIGNS IN THE
EASTERN MEDITERRANEAN

Of the general course of development in the art of writing around the Eastern Mediterranean, some
account has been given in Scripta Minoa, I, part ii, §§ 1, 2, 3 (1909); but subsequent discoveries at
Uruk and in Cyprus have established some further points. The primitive use of simple scratches and
notches as marks of ownership and craftsmanship is widespread in Egypt and Palestine, in Cyprus
at Vounous, and in Melos at Phylakopi. It is remarkable that such signs have not been recorded from
the deep neolithic deposit which underlies the Minoan strata at Knossos; and in any future excavation,
especially in the upper layers of that deposit, especial care should be taken to determine the phase at
which such marks came into use. The lowest strata at Phylakopi are contemporary with the Early
Minoan at Knossos.

Single linear signs on ingots of copper, from Cyprus, Mycenae, and Sardinia, and in Crete from
Hagia Triada, are of uncertain date. Such an ingot is depicted as tribute in the Egyptian tombs of
Rekhmara and Sen-mut, of the XVIII Dynasty: and those from Hagia Triada may be contemporary;
from Enkomi in Cyprus, rather later. Masons' marks on blocks of stone appear in the Palaces at
Knossos and Phaestos, from Middle Minoan I to Middle Minoan III. They belong to a single reper-
tory, and some recur among the primitive linear signs of Egypt, and in the later linear scripts on the
tablets. But they went out of use in Late Minoan I, when those scripts were coming in.

Between the publication of SMI in 1909 and the discovery of Linear-B tablets near Pylos in 1939*
the only new material is the hoard of clay sealings, labels, bars, and tablets from the Palace at Malha.
Their 'hieroglyphic' script connects the more pictorial signary of the seal-stones and the seal-impres-
sions from the Hieroglyphic Deposit at Knossos with the earliest inscriptions with 'Linear A signs,
three of which were found at Mallia (Chapouthier, 1930, pi. vi; l 1-3, pp. 55-6.) This deposit is dated
to Late Minoan III.