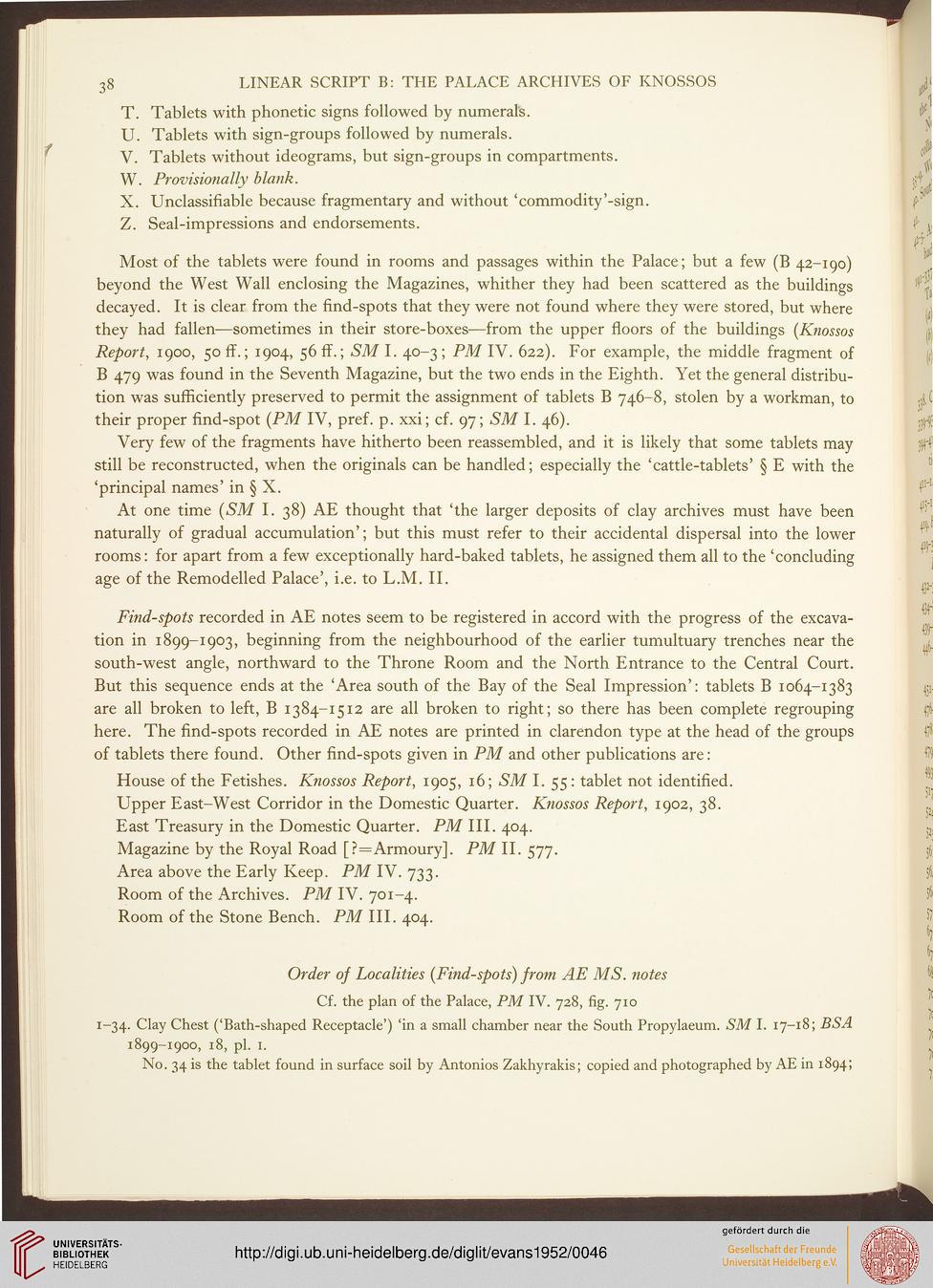 38 LINEAR SCRIPT B: THE PALACE ARCHIVES OF KNOSSOS

U. Tablets with sign-groups followed by numerals.

V. Tablets without ideograms, but sign-groups in compartments.

X. Unclassifiable because fragmentary and without 'commodity'-sign.

Most of the tablets were found in rooms and passages within the Palace; but a few (B 42-190)
beyond the West Wall enclosing the Magazines, whither they had been scattered as the buildings
decayed. It is clear from the find-spots that they were not found where they were stored, but where
they had fallen—sometimes in their store-boxes—from the upper floors of the buildings (Knossos
Report, 1900, 50 ff.; 1904, 56 ff.; SM I. 40-3; PM IV. 622). For example, the middle fragment of
B 479 was found in the Seventh Magazine, but the two ends in the Eighth. Yet the general distribu-
tion was sufficiently preserved to permit the assignment of tablets B 746-8, stolen by a workman, to
their proper find-spot (PM IV, pref. p. xxi; cf. 97; SM I. 46).

Very few of the fragments have hitherto been reassembled, and it is likely that some tablets may
still be reconstructed, when the originals can be handled; especially the 'cattle-tablets' § E with the
'principal names' in § X.

At one time (SM I. 38) AE thought that 'the larger deposits of clay archives must have been
naturally of gradual accumulation'; but this must refer to their accidental dispersal into the lower
rooms: for apart from a few exceptionally hard-baked tablets, he assigned them all to the 'concluding
age of the Remodelled Palace', i.e. to L.M. II.

Find-spots recorded in AE notes seem to be registered in accord with the progress of the excava-
tion in 1899-1903, beginning from the neighbourhood of the earlier tumultuary trenches near the
south-west angle, northward to the Throne Room and the North Entrance to the Central Court.
But this sequence ends at the 'Area south of the Bay of the Seal Impression': tablets B 1064-1383
are all broken to left, B 1384-1512 are all broken to right; so there has been complete regrouping
here. The find-spots recorded in AE notes are printed in clarendon type at the head of the groups
of tablets there found. Other find-spots given in PM and other publications are:

No. 34 is the tablet found in surface soil by Antonios Zakhyrakis; copied and photographed by AE in 1894;