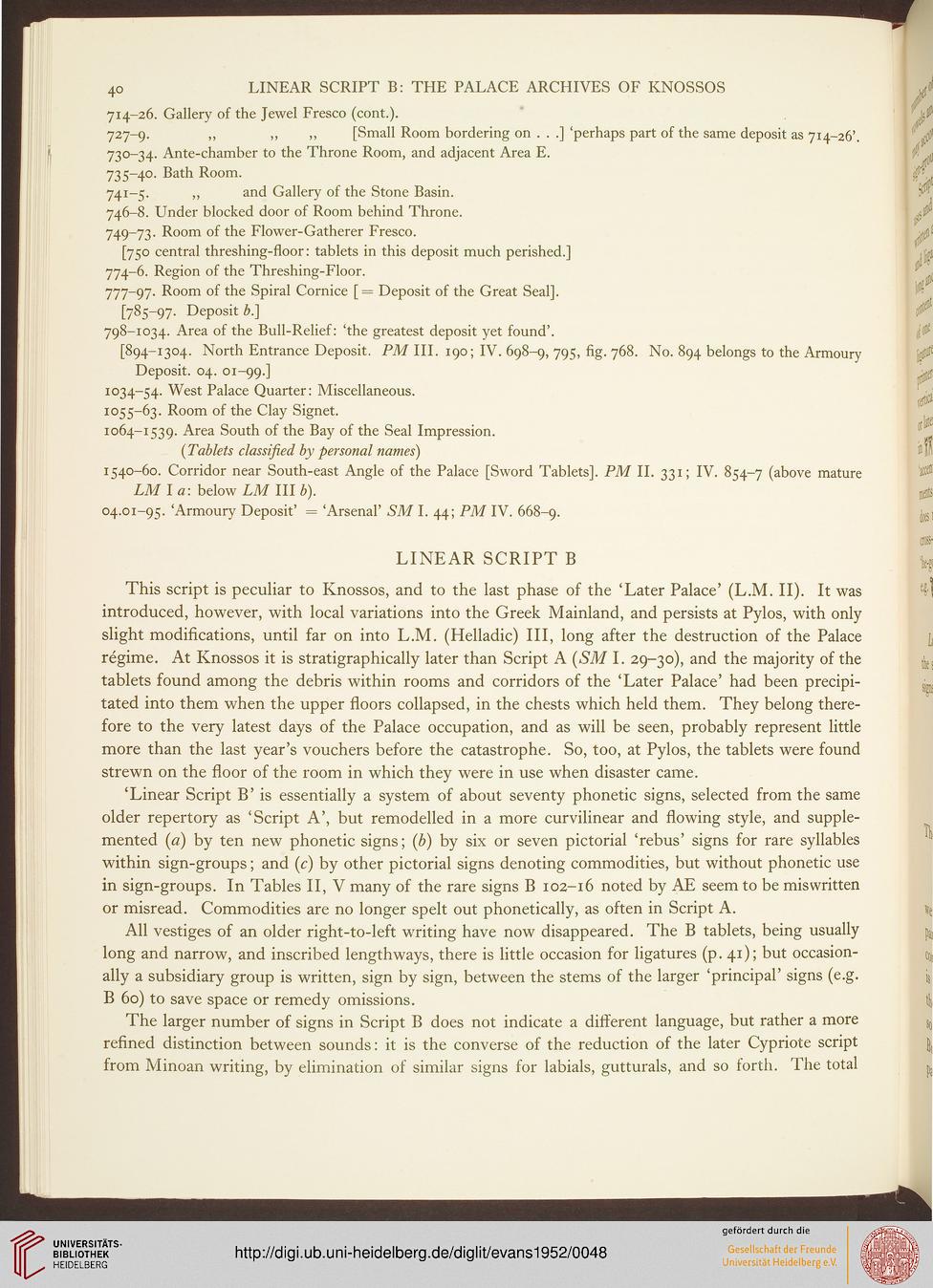 LINEAR SCRIPT B: THE PALACE ARCHIVES OF KNOSSOS

746-8. Under blocked door of Room behind Throne.

This script is peculiar to Knossos, and to the last phase of the 'Later Palace' (L.M. II). It was
introduced, however, with local variations into the Greek Mainland, and persists at Pylos, with only
slight modifications, until far on into L.M. (Helladic) III, long after the destruction of the Palace
regime. At Knossos it is stratigraphically later than Script A (SM I. 29-30), and the majority of the
tablets found among the debris within rooms and corridors of the 'Later Palace' had been precipi-
tated into them when the upper floors collapsed, in the chests which held them. They belong there-
fore to the very latest days of the Palace occupation, and as will be seen, probably represent little
more than the last year's vouchers before the catastrophe. So, too, at Pylos, the tablets were found
strewn on the floor of the room in which they were in use when disaster came.

'Linear Script B' is essentially a system of about seventy phonetic signs, selected from the same
older repertory as 'Script A', but remodelled in a more curvilinear and flowing style, and supple-
mented (a) by ten new phonetic signs; (b) by six or seven pictorial 'rebus' signs for rare syllables
within sign-groups; and (c) by other pictorial signs denoting commodities, but without phonetic use
in sign-groups. In Tables II, V many of the rare signs B 102-16 noted by AE seem to be miswritten
or misread. Commodities are no longer spelt out phonetically, as often in Script A.

All vestiges of an older right-to-left writing have now disappeared. The B tablets, being usually
long and narrow, and inscribed lengthways, there is little occasion for ligatures (p. 41); but occasion-
ally a subsidiary group is written, sign by sign, between the stems of the larger 'principal' signs (e.g.
B 60) to save space or remedy omissions.

The larger number of signs in Script B does not indicate a different language, but rather a more
refined distinction between sounds: it is the converse of the reduction of the later Cypriote script
from Minoan writing, by elimination of similar signs for labials, gutturals, and so forth. The total