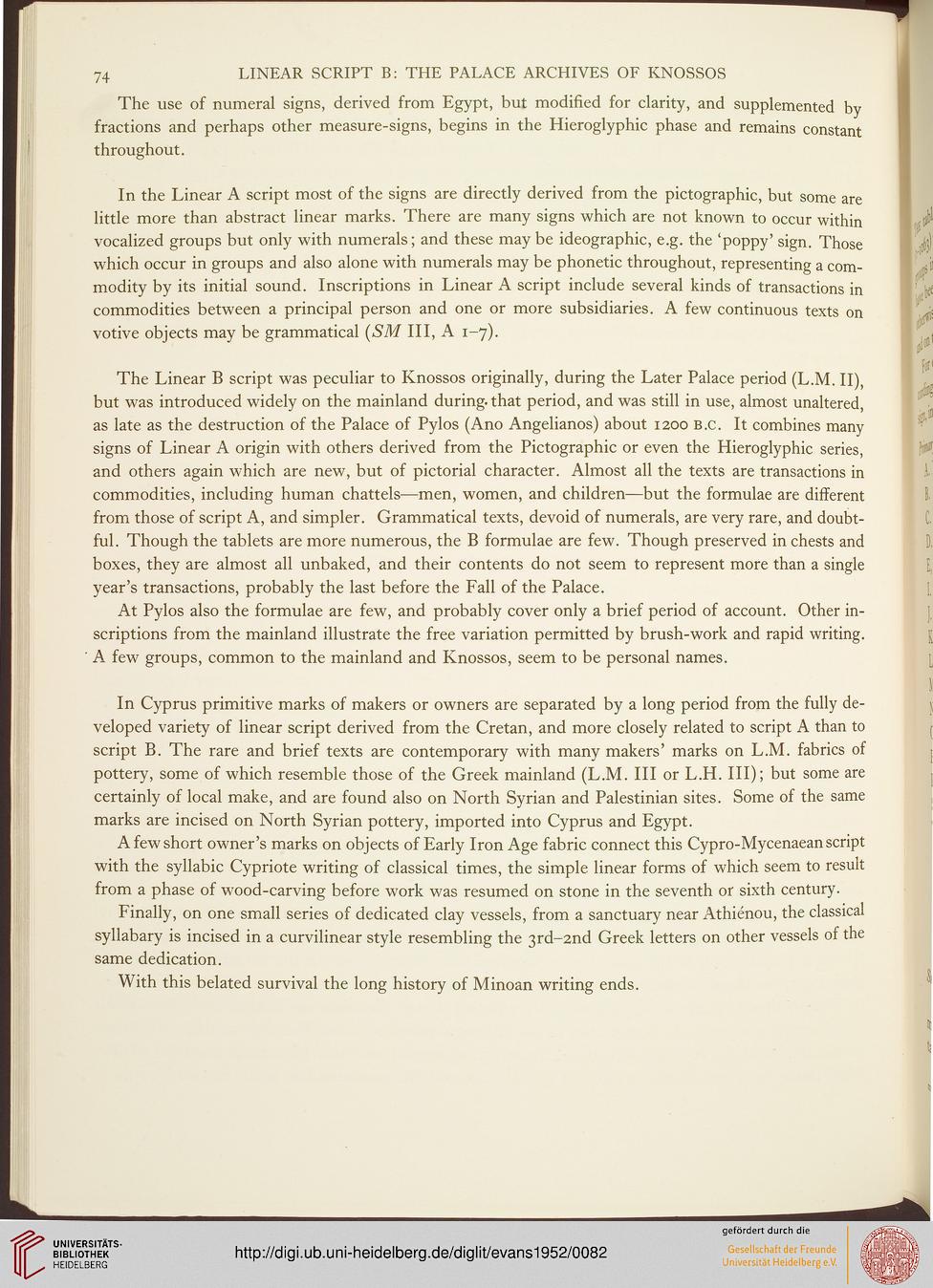 LINEAR SCRIPT B: THE PALACE ARCHIVES OF KNOSSOS

The use of numeral signs, derived from Egypt, but modified for clarity, and supplemented by
fractions and perhaps other measure-signs, begins in the Hieroglyphic phase and remains constant
throughout.

In the Linear A script most of the signs are directly derived from the pictographic, but some are
little more than abstract linear marks. There are many signs which are not known to occur within
vocalized groups but only with numerals; and these may be ideographic, e.g. the 'poppy' sign. Those
which occur in groups and also alone with numerals may be phonetic throughout, representing a com-
modity by its initial sound. Inscriptions in Linear A script include several kinds of transactions in
commodities between a principal person and one or more subsidiaries. A few continuous texts on
votive objects may be grammatical (SM III, A 1-7).

The Linear B script was peculiar to Knossos originally, during the Later Palace period (L.M. II),
but was introduced widely on the mainland during, that period, and was still in use, almost unaltered,
as late as the destruction of the Palace of Pylos (Ano Angelianos) about 1200 B.C. It combines many
signs of Linear A origin with others derived from the Pictographic or even the Hieroglyphic series,
and others again which are new, but of pictorial character. Almost all the texts are transactions in
commodities, including human chattels—men, women, and children—but the formulae are different
from those of script A, and simpler. Grammatical texts, devoid of numerals, are very rare, and doubt-
ful. Though the tablets are more numerous, the B formulae are few. Though preserved in chests and
boxes, they are almost all unbaked, and their contents do not seem to represent more than a single
year's transactions, probably the last before the Fall of the Palace.

At Pylos also the formulae are few, and probably cover only a brief period of account. Other in-
scriptions from the mainland illustrate the free variation permitted by brush-work and rapid writing.
A few groups, common to the mainland and Knossos, seem to be personal names.

In Cyprus primitive marks of makers or owners are separated by a long period from the fully de-
veloped variety of linear script derived from the Cretan, and more closely related to script A than to
script B. The rare and brief texts are contemporary with many makers' marks on L.M. fabrics of
pottery, some of which resemble those of the Greek mainland (L.M. Ill or L.H. Ill); but some are
certainly of local make, and are found also on North Syrian and Palestinian sites. Some of the same
marks are incised on North Syrian pottery, imported into Cyprus and Egypt.

A few short owner's marks on objects of Early Iron Age fabric connect this Cypro-Mycenaean script
with the syllabic Cypriote writing of classical times, the simple linear forms of which seem to result
from a phase of wood-carving before work was resumed on stone in the seventh or sixth century.

Finally, on one small series of dedicated clay vessels, from a sanctuary near Athienou, the classical
syllabary is incised in a curvilinear style resembling the 3rd-2nd Greek letters on other vessels of the
same dedication.

With this belated survival the long history of Minoan writing ends.