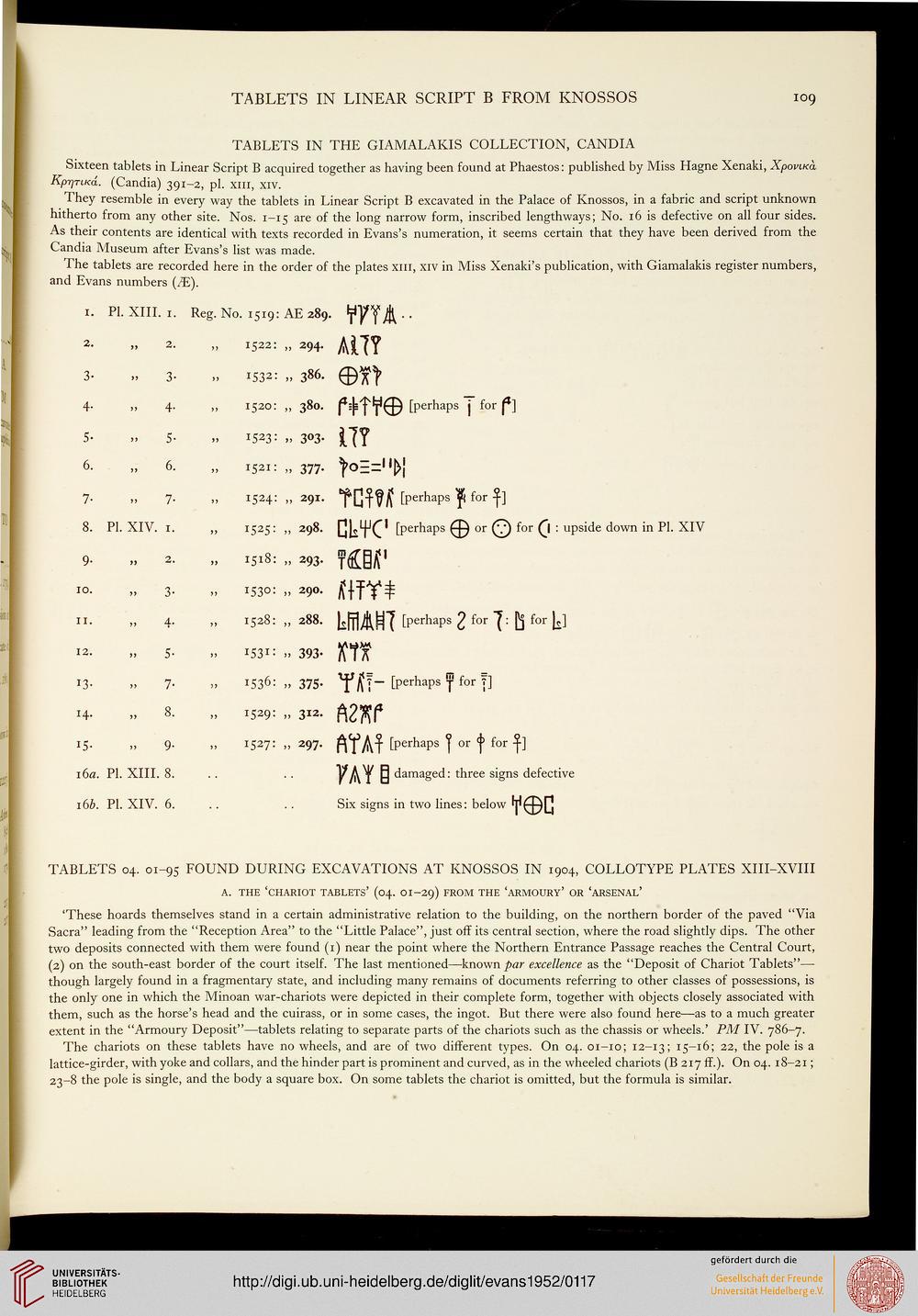 Information about OCR text
TABLETS IN LINEAR SCRIPT B FROM KNOSSOS

TABLETS IN THE GIAMALAKIS COLLECTION, CANDIA

Sixteen tablets in Linear Script B acquired together as having been found at Phaestos: published by Miss Hagne Xenaki, Xpovixa
KprjTiKd. (Candia) 391-2, pi. xin, xiv.

They resemble in every way the tablets in Linear Script B excavated in the Palace of Knossos, in a fabric and script unknown
hitherto from any other site. Nos. 1-15 are of the long narrow form, inscribed lengthways; No. 16 is defective on all four sides.
As their contents are identical with texts recorded in Evans's numeration, it seems certain that they have been derived from the
Candia Museum after Evans's list was made.

The tablets are recorded here in the order of the plates xin, xiv in Miss Xenaki's publication, with Giamalakis register numbers,
and Evans numbers (M).

r A I B damaged: three signs defective
Six signs in two lines: below "pffiH

TABLETS 04. 01-95 FOUND DURING EXCAVATIONS AT KNOSSOS IN 1904, COLLOTYPE PLATES XIII-XVIII

'These hoards themselves stand in a certain administrative relation to the building, on the northern border of the paved "Via
Sacra" leading from the "Reception Area" to the "Little Palace", just off its central section, where the road slightly dips. The other
two deposits connected with them were found (i) near the point where the Northern Entrance Passage reaches the Central Court,
(2) on the south-east border of the court itself. The last mentioned—known par excellence as the "Deposit of Chariot Tablets"—
though largely found in a fragmentary state, and including many remains of documents referring to other classes of possessions, is
the only one in which the Minoan war-chariots were depicted in their complete form, together with objects closely associated with
them, such as the horse's head and the cuirass, or in some cases, the ingot. But there were also found here—as to a much greater
extent in the "Armoury Deposit"—tablets relating to separate parts of the chariots such as the chassis or wheels.' PM IV. 786-7.