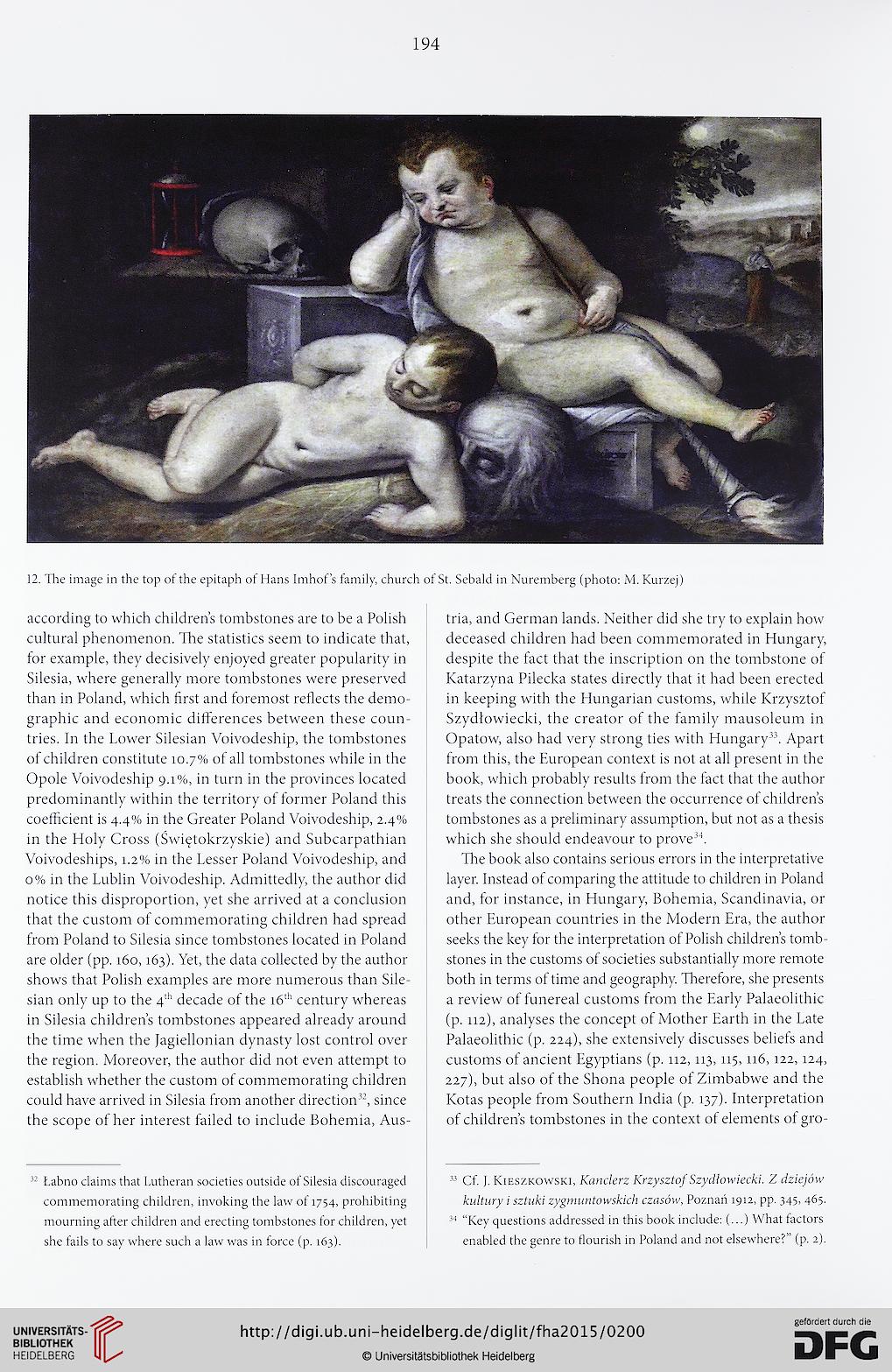 12. The image in the top of the epitaph of Hans Imhof’s family, church

according to which childrens tombstones are to be a Polish
cultural phenomenon. The statistics seem to indicate that,
for example, they decisively enjoyed greater popularity in
Silesia, where generally more tombstones were preserved
than in Poland, which first and foremost reflects the demo-
graphic and economic differences between these coun-
tries. In the Lower Silesian Voivodeship, the tombstones
of children constitute 10.7% of all tombstones while in the
Opole Voivodeship 9.1%, in turn in the provinces located
predominantly within the territory of former Poland this
coefficient is 4.4% in the Greater Poland Voivodeship, 2.4%
in the Holy Cross (Świętokrzyskie) and Subcarpathian
Voivodeships, 1.2% in the Lesser Poland Voivodeship, and
0% in the Lublin Voivodeship. Admittedly, the author did
notice this disproportion, yet she arrived at a conclusion
that the custom of commemorating children had spread
from Poland to Silesia since tombstones located in Poland
are older (pp. 160,163). Yet, the data collected by the author
shows that Polish examples are more numerous than Sile-
sian only up to the 4 th decade of the 16 th century whereas
in Silesia children’s tombstones appeared already around
the time when the Jagiellonian dynasty lost control over
the region. Moreover, the author did not even attempt to
establish whether the custom of commemorating children
could have arrived in Silesia from another direction 32, since
the scope of her interest failed to include Bohemia, Aus-

32 Labno claims that Lutheran societies outside of Silesia discouraged
commemorating children, invoking the law of 1754, prohibiting
mourning after children and erecting tombstones for children, yet
she fails to say where such a law was in force (p. 163).

tria, and German lands. Neither did she try to explain how
deceased children had been commemorated in Hungary,
despite the fact that the inscription on the tombstone of
Katarzyna Pilecka states directly that it had been erected
in keeping with the Hungarian customs, while Krzysztof
Szydłowiecki, the creator of the family mausoleum in
Opatow, also had very strong ties with Hungary 33. Apart
from this, the European context is not at all present in the
book, which probably results from the fact that the author
treats the connection between the occurrence of children’s
tombstones as a preliminary assumption, but not as a thesis
which she should endeavour to prove 34.

The book also contains serious errors in the interpretative
layer. Instead of comparing the attitude to children in Poland
and, for instance, in Hungary, Bohemia, Scandinavia, or
other European countries in the Modern Era, the author
seeks the key for the interpretation of Polish children’s tomb-
stones in the customs of societies substantially more remote
both in terms of time and geography. Therefore, she presents
a review of funereal customs from the Early Palaeolithic
(p. 112), analyses the concept of Mother Earth in the Late
Palaeolithic (p. 224), she extensively discusses beliefs and
customs of ancient Egyptians (p. 112,113,115,116,122,124,
227), but also of the Shona people of Zimbabwe and the
Kotas people from Southern India (p. 137). Interpretation
of children’s tombstones in the context of elements of gro-

34 “Key questions addressed in this book include: (...) What factors
enabled the genre to flourish in Poland and not elsewhere?” (p. 2).