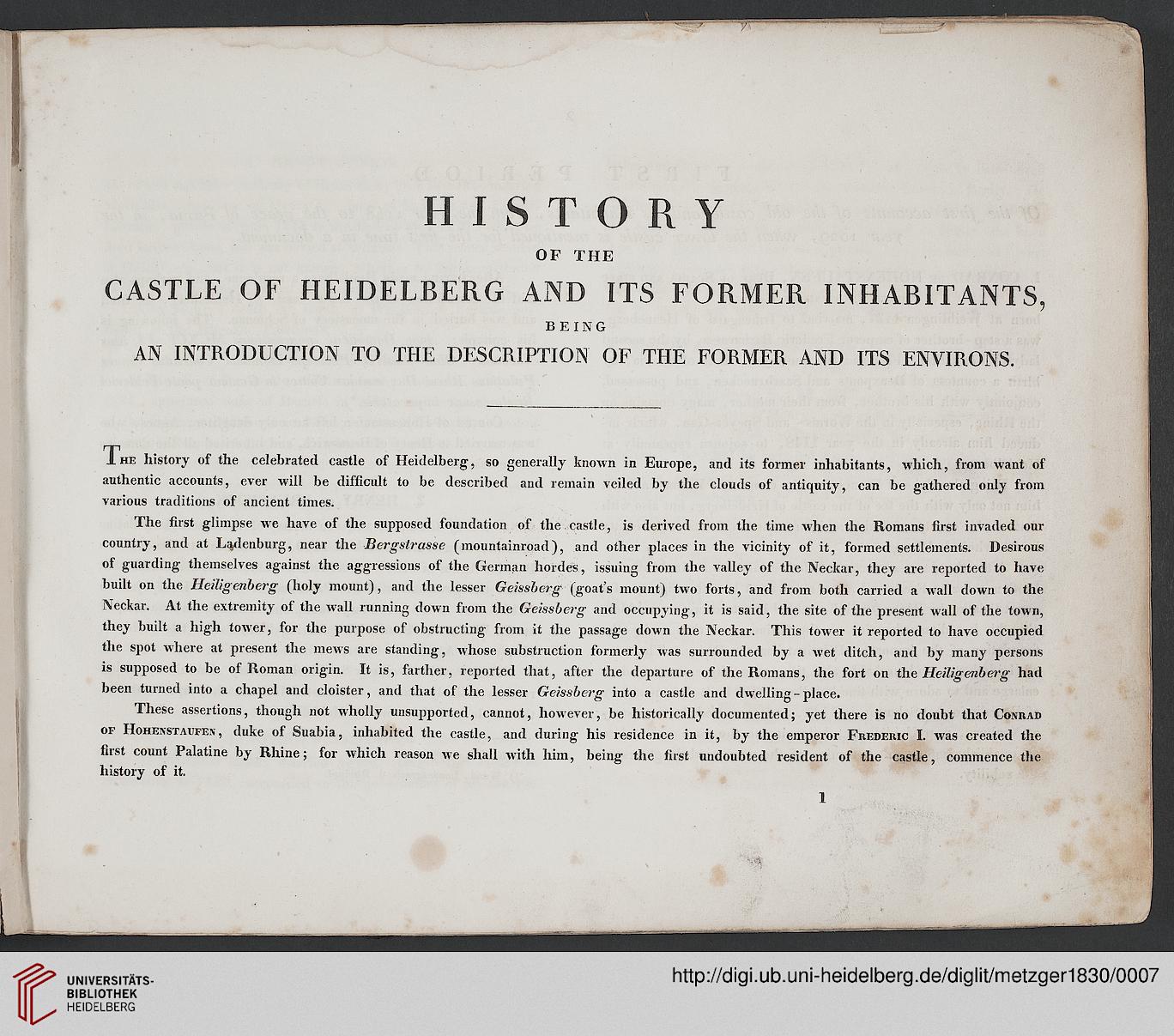 CASTLE OF HEIDELBERG AND ITS FORMER INHABITANTS,

AN INTRODUCTION TO THE DESCRIPTION OF THE FORMER AND ITS ENVIRONS.

The history of the celebrated castle of Heidelberg-, so generally known in Europe, and its former inhabitants, which, from want of
authentic accounts, ever will be difficult to be described and remain veiled by the clouds of antiquity, can be gathered only from
various traditions of ancient times.

The first glimpse we have of the supposed foundation of the castle, is derived from the time when the Romans first invaded our
country, and at La/lenburg, near the Bergstrasse (mountainroad), and other places in the vicinity of it, formed settlements. Desirous
of guarding themselves against the aggressions of the German hordes, issuing from the valley of the Neckar, they are reported to have
built on the Heiligenberg (holy mount), and the lesser Geissherg (goat's mount) two forts, and from both carried a wall down to the
Neckar. At the extremity of the wall running down from the Geissberg and occupying, it is said, the site of the present wall of the town,
they built a high tower, for the purpose of obstructing from it the passage down the Neckar. This tower it reported to have occupied
the spot where at present the mews are standing, whose substruction formerly was surrounded by a wet ditch, and by many persons
is supposed to be of Roman origin. It is, farther, reported that, after the departure of the Romans, the fort on the Heiligenberg had
been turned into a chapel and cloister, and that of the lesser Geissberg into a castle and dwelling-place.

These assertions, though not wholly unsupported, cannot, however, be historically documented; yet there is no doubt that CortnAD
of Hohenstaufen, duke of Suabia, inhabited the castle, and during his residence in it, by the emperor Frederic I. was created the
first count Palatine by Rhine; for which reason we shall with him, being the first undoubted resident of the castle, commence the
history of it.