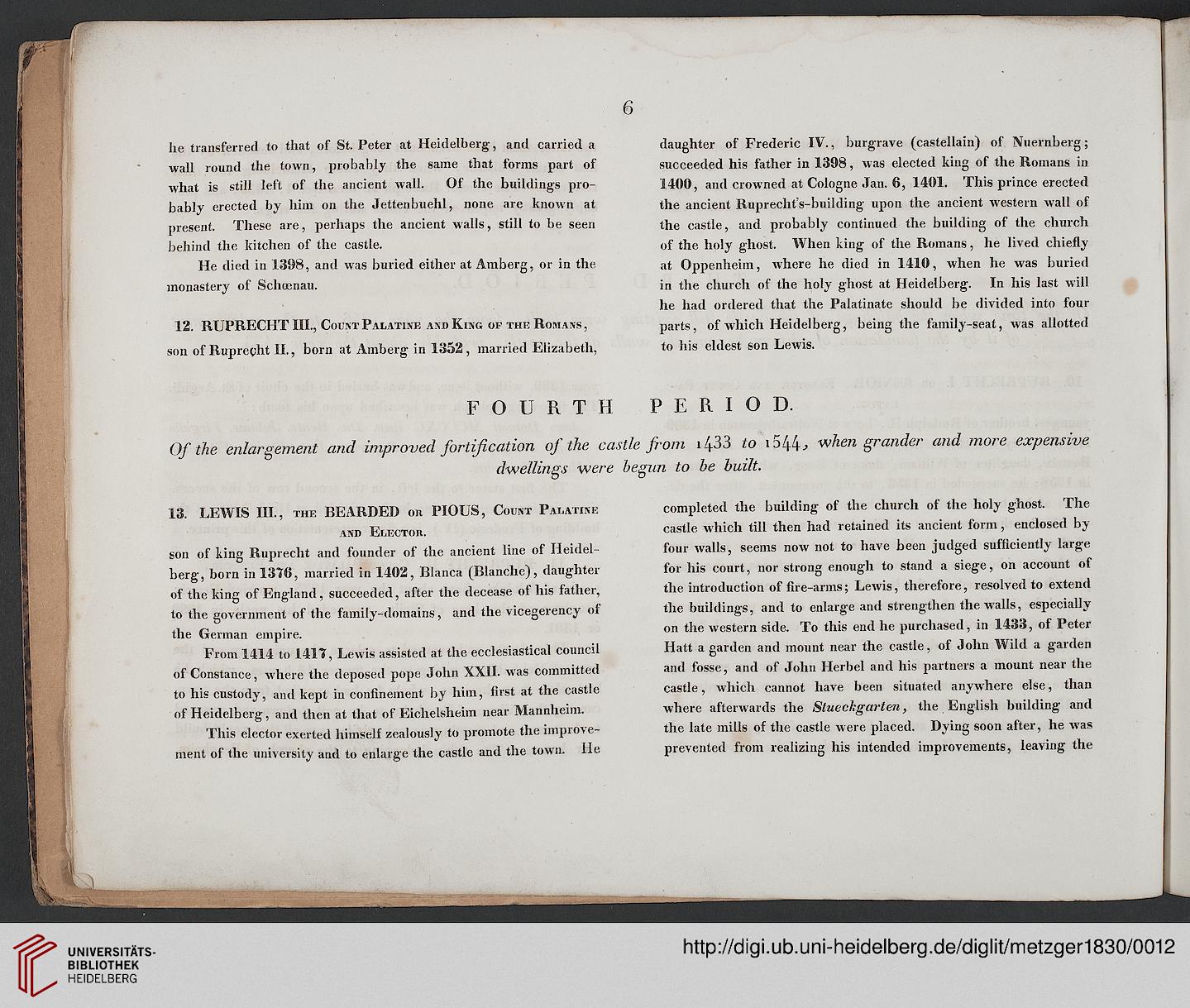 he transferred to that of St. Peter at Heidelberg, and carried a
wall round the town, probably the same that forms part of
what is still left of the ancient wall. Of the buildings pro-
bably erected by him on the Jettenbuehl, none are known at
present. These are, perhaps the ancient walls, still to be seen
behind the kitchen of the castle.

He died in 1398, and was buried either at Amberg, or in the
monastery of Schoenau.

12. RUPRECHT III., Coujnt Palatine and King of the Romans ,
son of Rupreeht II., born at Amberg in 1352, married Elizabeth,

daughter of Frederic IV., burgrave (castellain) of Nuernberg;
succeeded his father in 1398, was elected king of the Romans in
1400, and crowned at Cologne Jan. 6, 1401. This prince erected
the ancient Ruprecht's-building upon the ancient western wall of
the castle, and probably continued the building of the church
of the holy ghost. When king of the Romans, he lived chiefly
at Oppenheim, where he died in 1410, when he was buried
in the church of the holy ghost at Heidelberg. In his last will
he had ordered that the Palatinate should be divided into four
parts, of which Heidelberg, being the family-seat, was allotted
to his eldest son Lewis.

dwellings were begun to be built.

son of king Ruprecht and founder of the ancient line of Heidel-
berg, born in 1376, married in 1402, Blanca (Blanche), daughter
of the king of England, succeeded, after the decease of his father,
to the government of the family-domains, and the vicegerency of
the German empire.

From 1414 to 1417, Lewis assisted at the ecclesiastical council
of Constance, where the deposed pope John XXII. was committed
to his custody, and kept in confinement by him, first at the castle
of Heidelberg, and then at that of Eichelsheim near Mannheim.

This elector exerted himself zealously to promote the improve-
ment of the university and to enlarge the castle and the town. He

completed the building of the church of the holy ghost. The
castle which till then had retained its ancient form, enclosed by
four walls, seems now not to have been judged sufficiently large
for his court, nor strong enough to stand a siege, on account of
the introduction of fire-arms; Lewis, therefore, resolved to extend
the buildings, and to enlarge and strengthen the walls, especially
on the western side. To this end he purchased, in 1433, of Peter
Hatt a garden and mount near the castle, of John Wild a garden
and fosse, and of John Herbel and his partners a mount near the
castle, which cannot have been situated anywhere else, than
where afterwards the Stuechgarten, the English building and
the late mills of the castle were placed. Dying soon after, he was
prevented from realizing his intended improvements, leaving the