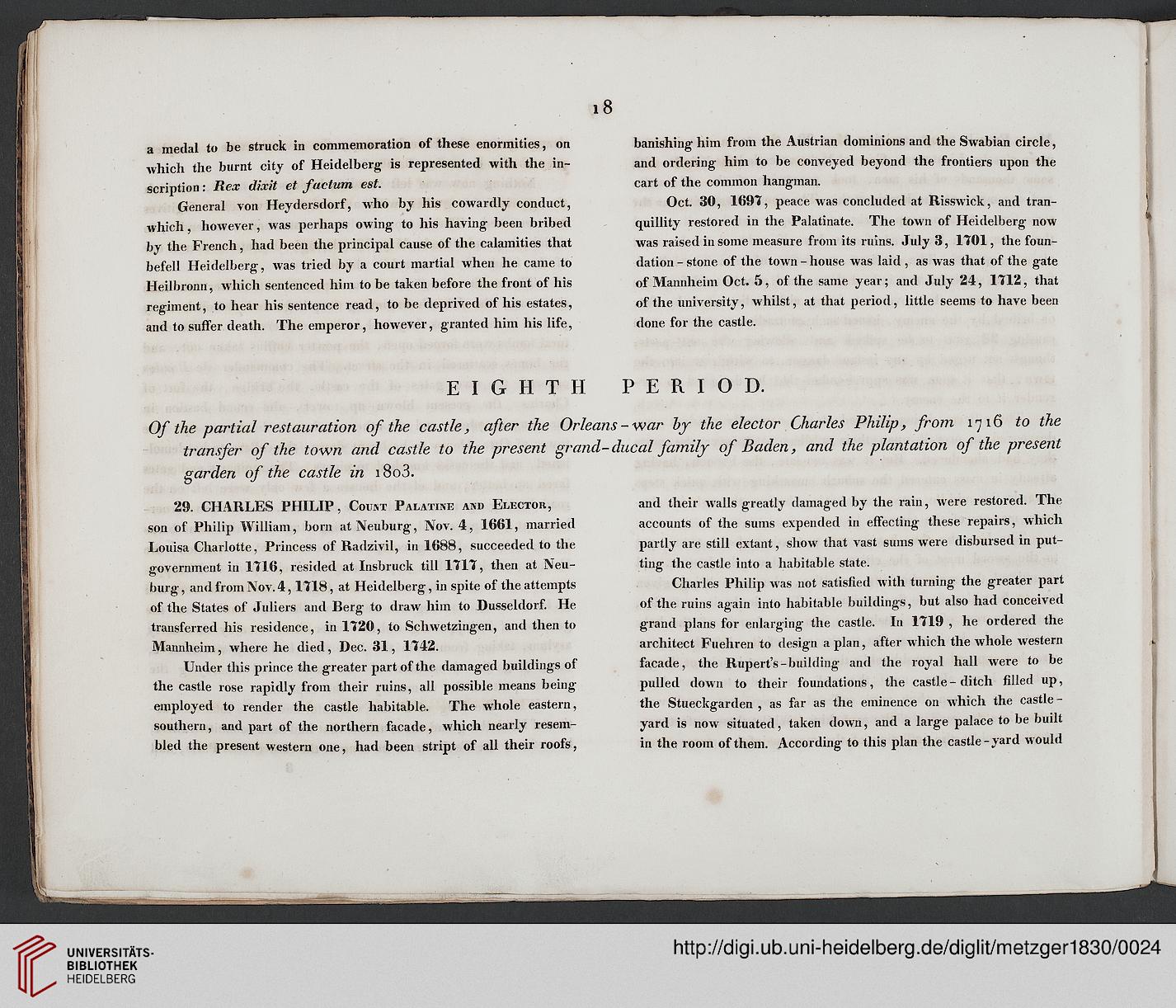 a medal to be struck in commemoration of these enormities, on
which the burnt city of Heidelberg is represented with the in-
scription : Rex dixit et factum est.

General von Heydersdorf, who by his cowardly conduct,
which, however, was perhaps owing to his having been bribed
by the French, had been the principal cause of the calamities that
befell Heidelberg, was tried by a court martial when he came to
Heilbronn, which sentenced him to be taken before the front of his
regiment, to hear his sentence read, to be deprived of his estates,
and to suffer death. The emperor, however, granted him his life,

banishing him from the Austrian dominions and the Swabian circle,
and ordering him to be conveyed beyond the frontiers upon the
cart of the common hangman.

Oct. 30, 1697, peace was concluded at Risswick, and tran-
quillity restored in the Palatinate. The town of Heidelberg now
was raised in some measure from its ruins. July 3, 1701, the foun-
dation - stone of the town - house was laid , as was that of the gate
of Mannheim Oct. 5, of the same year; and July 24, 1712, that
of the university, whilst, at that period, little seems to have been
done for the castle.

29. CHARLES PHILIP, Coum Palatine and Elector,
son of Philip William, born at Neuburg, Nov. 4, 1661, married
Louisa Charlotte, Princess of Radzivil, in 1688, succeeded to the
government in 1716, resided at Insbruck till 1717, then at Neu-
burg, and from Nov. 4,1718, at Heidelberg, in spite of the attempts
of the States of Juliers and Berg to draw him to Dusseldorf. He
transferred his residence, in 1720, to Schwetzingen, and then to
Mannheim, where he died, Dec. 31, 1742.

Under this prince the greater part of the damaged buildings of
the castle rose rapidly from their ruins, all possible means being
employed to render the castle habitable. The whole eastern,
southern, and part of the northern facade, which nearly resem-
bled the present western one, had been stript of all their roofs,

and their walls greatly damaged by the rain, were restored. The
accounts of the sums expended in effecting these repairs, which
partly are still extant, show that vast sums were disbursed in put-
ting the castle into a habitable state.

Charles Philip was not satisfied with turning the greater part
of the ruins again into habitable buildings, but also had conceived
grand plans for enlarging the castle. In 1719 , he ordered the
architect Fuehren to design a plan, after which the whole western
facade, the Rupert's-building and the royal hall were to be
pulled down to their foundations, the castle - ditch filled up,
the Stueckgarden , as far as the eminence on which the castle-
yard is now situated, taken down, and a large palace to be built
in the room of them. According to this plan the castle-yard would