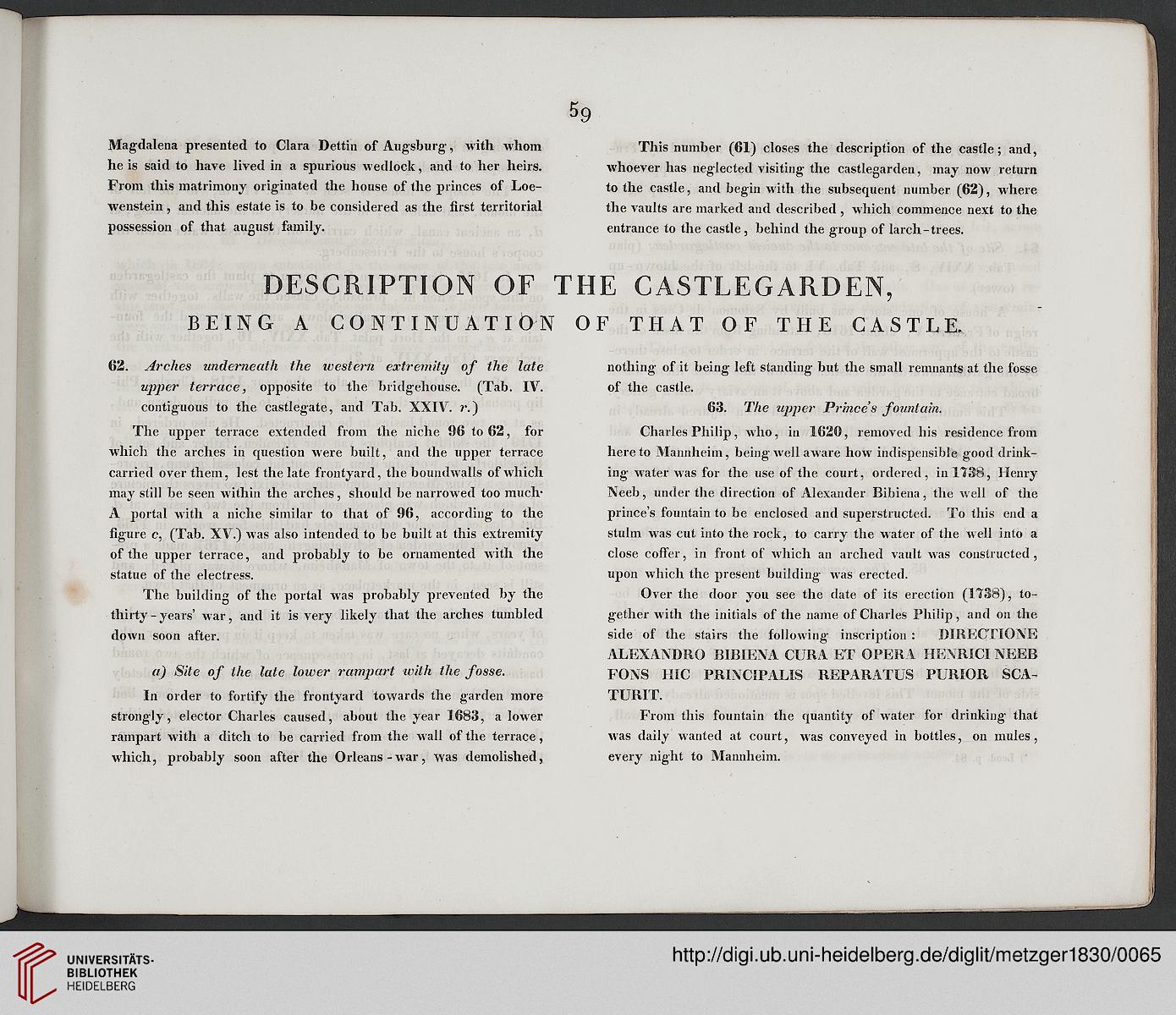 Magdalena presented to Clara Dettin of Augsburg1, with whom
he is said to have lived in a spurious wedlock, and to her heirs.
From this matrimony originated the house of the princes of Loe-
wenstein, and this estate is to be considered as the first territorial
possession of that august family.

This number (61) closes the description of the castle; and,
whoever has neglected visiting the castlegarden, may now return
to the castle, and begin with the subsequent number (62), where
the vaults are marked and described , which commence next to the
entrance to the castle, behind the group of larch-trees.

OF THAT OF THE CASTLE.

62. Arches underneath the western extremity of the late
upper terrace, opposite to the bridgehouse. (Tab. IV.
contiguous to the castlegate, and Tab. XXIV. r.)

The upper terrace extended from the niche 96 to 62, for
which the arches in question were built, and the upper terrace
carried over them, lest the late frontyard, the boundwalls of which
may still be seen within the arches, should be narrowed too much-
A portal with a niche similar to that of 96, according to the
figure e, (Tab. XV.) was also intended to be built at this extremity
of the upper terrace, and probably to be ornamented with the
statue of the electress.

The building of the portal was probably prevented by the
thirty - years' war, and it is very likely that the arches tumbled
down soon after.

a) Site of the late lower rampart with the fosse.

In order to fortify the frontyard towards the garden more
strongly, elector Charles caused, about the year 1683, a lower
rampart with a ditch to be carried from the Mall of the terrace,
which, probably soon after the Orleans-war, was demolished,

nothing of it being left standing but the small remnants at the fosse
of the castle.

Charles Philip, who, in 1620, removed his residence from
here to Mannheim, being well aware how indispensible good drink-
ing water was for the use of the court, ordered, in 1738, Henry
Neeb, under the direction of Alexander Bibiena, the well of the
prince's fountain to be enclosed and superstructed. To this end a
stulm was cut into the rock, to carry the water of the well into a
close coffer, in front of which an arched vault was constructed,
upon which the present building was erected.

Over the door you see the date of its erection (1738), to-
gether with the initials of the name of Charles Philip, and on the
side of the stairs the following inscription : DIRECTIONE
ALEXANDRO BIBIENA CURA ET OPERA HENRICI NEEB
FONS HIC PRINCIPALIS REPARATUS PURIOR SCA~
TURIT.

From this fountain the quantity of water for drinking that
was daily wanted at court, was conveyed in bottles, on mules,
every night to Mannheim.