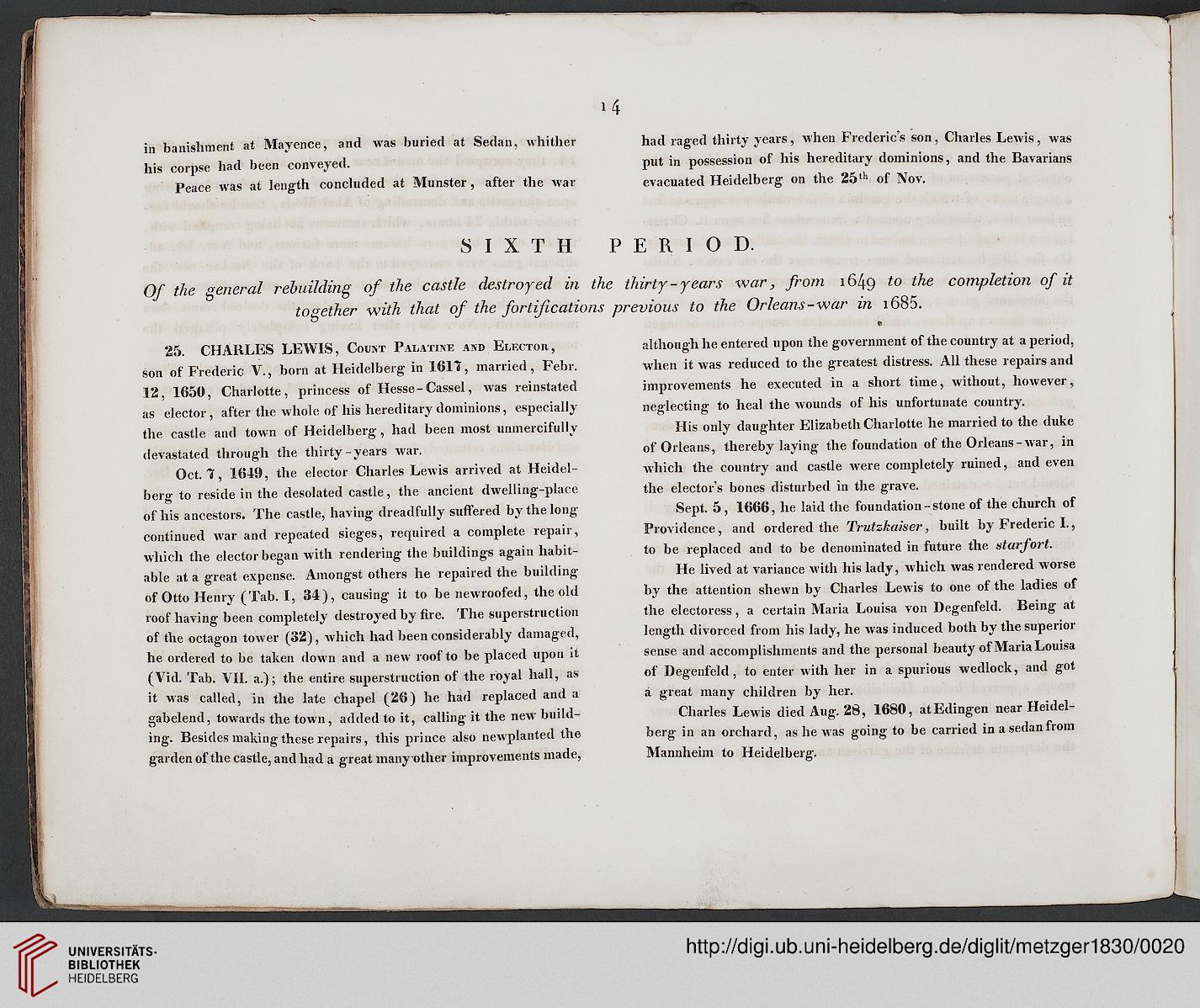 Information about OCR text
i4

in banishment at Mayence, and was buried at Sedan, whither
his corpse had been conveyed.

Peace was at length concluded at Munster, after the war

had raged thirty years, when Frederic's son, Charles Lewis, was
put in possession of his hereditary dominions, and the Bavarians
evacuated Heidelberg on the 25 th of Nov.

Of the general rebuilding of the castle destroyed in the thirty-years war, from 1649 t0 ^e completion of it

together with that of the fortifications previous to the Orleans-war in i685.

25. CHARLES LEWIS, Coukt Palatine and Elector,
son of Frederic V., born at Heidelberg in 1617, married, Febr.
12, 1650, Charlotte, princess of Hesse - Cassel, was reinstated
as elector, after the whole of his hereditary dominions, especially
the castle and town of Heidelberg, had been most unmercifully
devastated through the thirty-years war.

Oct. 7, 1649, the elector Charles Lewis arrived at Heidel-
berg to reside in the desolated castle, the ancient dwelling-place
of his ancestors. The castle, having dreadfully suffered by the long
continued war and repeated sieges, required a complete repair,
which the elector began with rendering the buildings again habit-
able at a great expense. Amongst others he repaired the building
of Otto Henry (Tab. I, 34), causing it to be newroofed, the old
roof having been completely destroyed by fire. The superstruction
of the octagon tower (32), which had been considerably damaged,
he ordered to be taken down and a new roof to be placed upon it
(Vid. Tab. VII. a.); the entire superstruction of the royal hall, as
it was called, in the late chapel (26) he had replaced and a
gabelend, towards the town, added to it, calling it the new build-
ing. Besides making these repairs, this prince also newplanted the
garden of the castle, and had a great many other improvements made,

although he entered upon the government of the country at a period,
when it was reduced to the greatest distress. All these repairs and
improvements he executed in a short time, without, however,
neglecting to heal the wounds of his unfortunate country.

His only daughter Elizabeth Charlotte he married to the duke
of Orleans, thereby laying the foundation of the Orleans-war, in
which the country and castle were completely ruined, and even
the elector's bones disturbed in the grave.

Sept. 5, 1666, he laid the foundation-stone of the church of
Providence, and ordered the Trutzkaiser, built by Frederic I.,
to be replaced and to be denominated in future the starfort.

He lived at variance with his lady, which was rendered worse
by the attention shewn by Charles Lewis to one of the ladies of
the electoress, a certain Maria Louisa von Degenfeld. Being at
length divorced from his lady, he was induced both by the superior
sense and accomplishments and the personal beauty of Maria Louisa
of Degenfeld, to enter with her in a spurious wedlock, and got
a great many children by her.

Charles Lewis died Aug. 28, 1680, atEdingen near Heidel-
berg in an orchard, as he was going to be carried in a sedan from
Mannheim to Heidelberg.