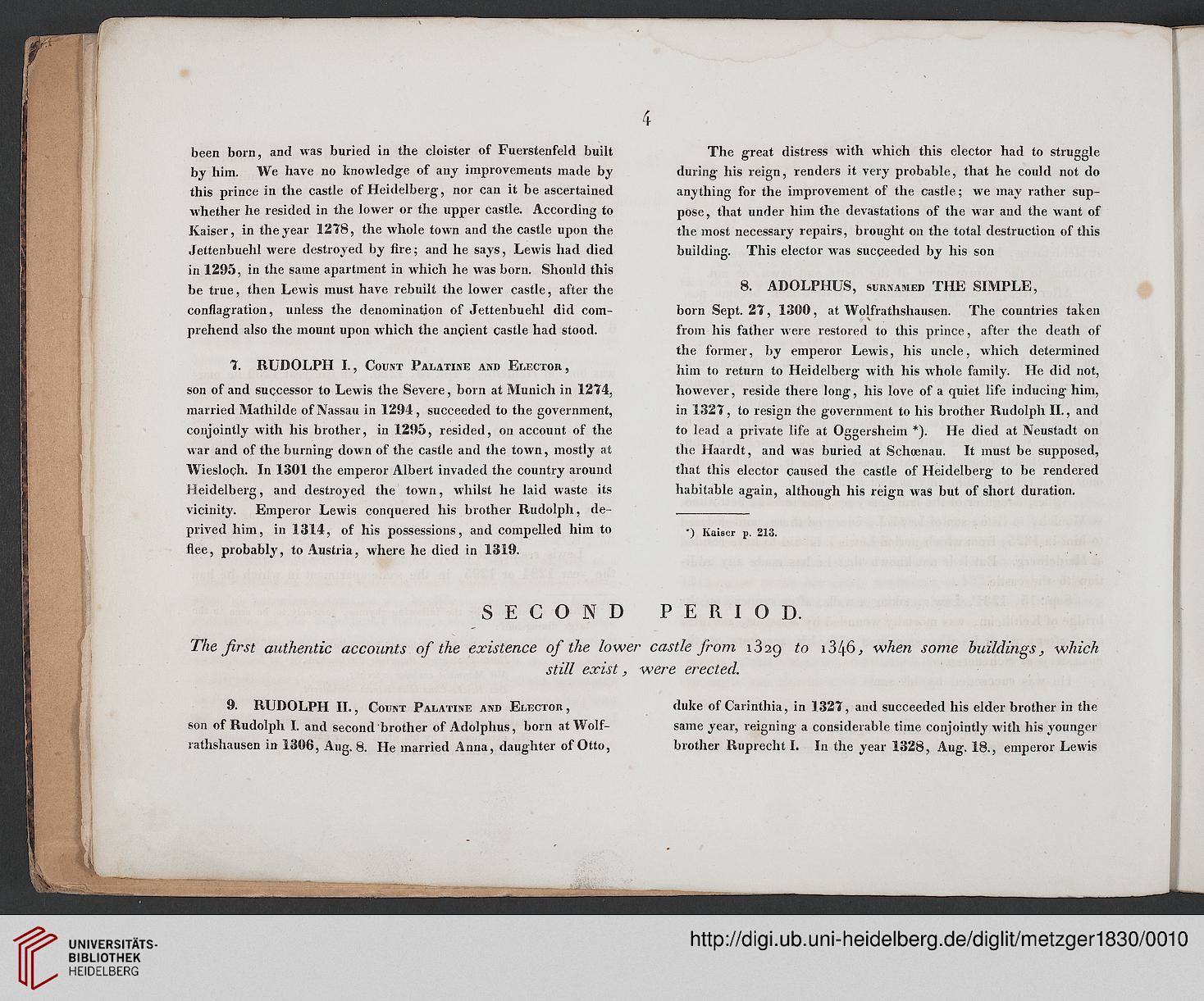 Information about OCR text
been born, and was buried in the cloister of Fuerstenfeld built
by him. We have no knowledge of any improvements made by
this prince in the castle of Heidelberg, nor can it be ascertained
whether he resided in the lower or the upper castle. According to
Kaiser, in the year 1278, the whole town and the castle upon the
Jettenbuehl were destroyed by fire; and he says, Lewis had died
in 1295, in the same apartment in which he was born. Should this
be true, then Lewis must have rebuilt the lower castle, after the
conflagration, unless the denomination of Jettenbuehl did com-
prehend also the mount upon which the ancient castle had stood.

7. RUDOLPH I., Count Palatine and Elector,

son of and successor to Lewis the Severe, born at Munich in 1274,
married Mathilde of Nassau in 1294, succeeded to the government,
conjointly with his brother, in 1295, resided, on account of the
war and of the burning down of the castle and the town, mostly at
Wiesloch. In 1301 the emperor Albert invaded the country around
Heidelberg, and destroyed the town, whilst he laid waste its
vicinity. Emperor Lewis conquered his brother Rudolph, de-
prived him, in 1314, of his possessions, and compelled him to
flee, probably, to Austria, where he died in 1319.

The first authentic accounts of the existence of the lo

9. RUDOLPH II., Count Palatine and Elector,
son of Rudolph I. and second brother of Adolphus, born atWolf-
rathshausen in 1306, Aug. 8. He married Anna, daughter of Otto,

The great distress with which this elector had to struggle
during his reign, renders it very probable, that he could not do
anything for the improvement of the castle; we may rather sup-
pose , that under him the devastations of the war and the want of
the most necessary repairs, brought on the total destruction of this
building. This elector was succeeded by his son

born Sept. 27, 1300, at Wolfrathshausen. The countries taken
from his father were restored to this prince, after the death of
the former, by emperor Lewis, his uncle, which determined
him to return to Heidelberg with his whole family. He did not,
however, reside there long, his love of a quiet life inducing him,
in 1327, to resign the government to his brother Rudolph II., and
to lead a private life at Oggersheim *). He died at Neustadt on
the Haardt, and was buried at Schoenau. It must be supposed,
that this elector caused the castle of Heidelberg to be rendered
habitable again, although his reign was but of short duration.

duke of Carinthia, in 1327, and succeeded his elder brother in the
same year, reigning a considerable time conjointly with his younger
brother Ruprecht I. In the year 1328, Aug. 18., emperor Lewis