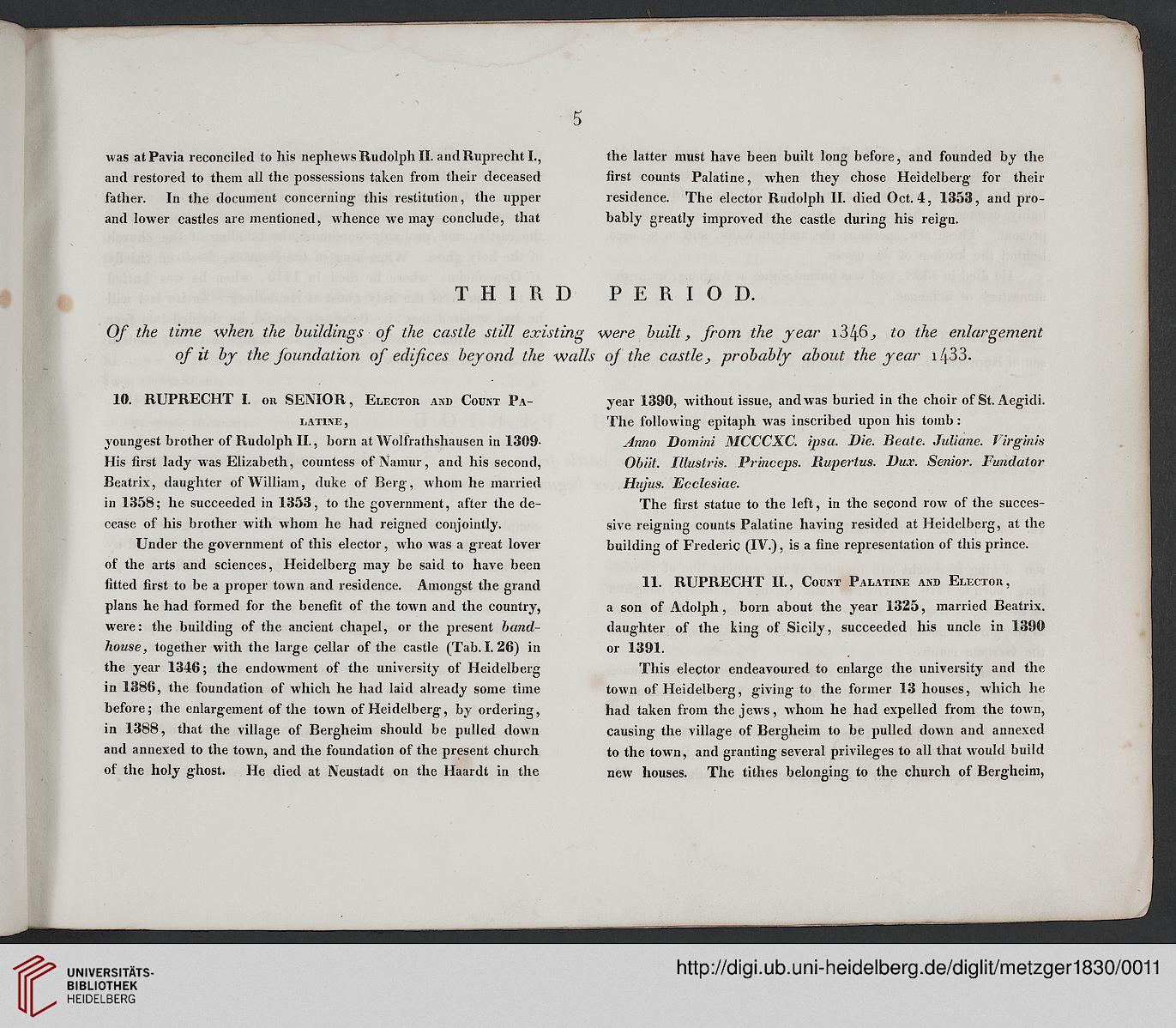 was atPavia reconciled to his nephews Rudolph II. andRuprecht I.,
and restored to them all the possessions taken from their deceased
father. In the document concerning this restitution, the upper
and lower castles are mentioned, whence we may conclude, that

the latter must have been built long before, and founded by the
first counts Palatine, when they chose Heidelberg for their
residence. The elector Rudolph II. died Oct. 4, 1353, and pro-
bably greatly improved the castle during his reign.

10. RUPRECHT I. on SENIOR, Electok and Count Pa-
latine ,

youngest brother of Rudolph II., born at Wolfrathshausen in 1309-
His first lady wras Elizabeth, countess of Namur, and his second,
Beatrix, daughter of William, duke of Berg, whom he married
in 1358; he succeeded in 1353, to the government, after the de-
cease of his brother with whom he had reigned conjointly.

Under the government of this elector, who was a great lover
of the arts and sciences, Heidelberg may be said to have been
fitted first to be a proper town and residence. Amongst the grand
plans he had formed for the benefit of the town and the country,
were: the building of the ancient chapel, or the present band-
house, together with the large cellar of the castle (Tab. I. 26) in
the year 1346; the endowment of the university of Heidelberg
in 1386, the foundation of which he had laid already some time
before; the enlargement of the town of Heidelberg, by ordering,
in 1388, that the village of Bergheim should be pulled down
and annexed to the town, and the foundation of the present church
of the holy ghost. He died at Neustadt on the Haardt in the

vere built, from the year i346^ to the enlargement
of the castle, probably about the year i 433.

year 1390, without issue, and was buried in the choir of St. Aegidi.
The following epitaph was inscribed upon his tomb:

The first statue to the left, in the second row of the succes-
sive reigning counts Palatine having resided at Heidelberg, at the
building of Frederic (IV.), is a fine representation of this prince.

This elector endeavoured to enlarge the university and the
town of Heidelberg, giving to the former 13 houses, which he
had taken from the jews, whom he had expelled from the town,
causing the village of Bergheim to be pulled down and annexed
to the town, and granting several privileges to all that would build
new houses. The tithes belonging to the church of Bergheim,