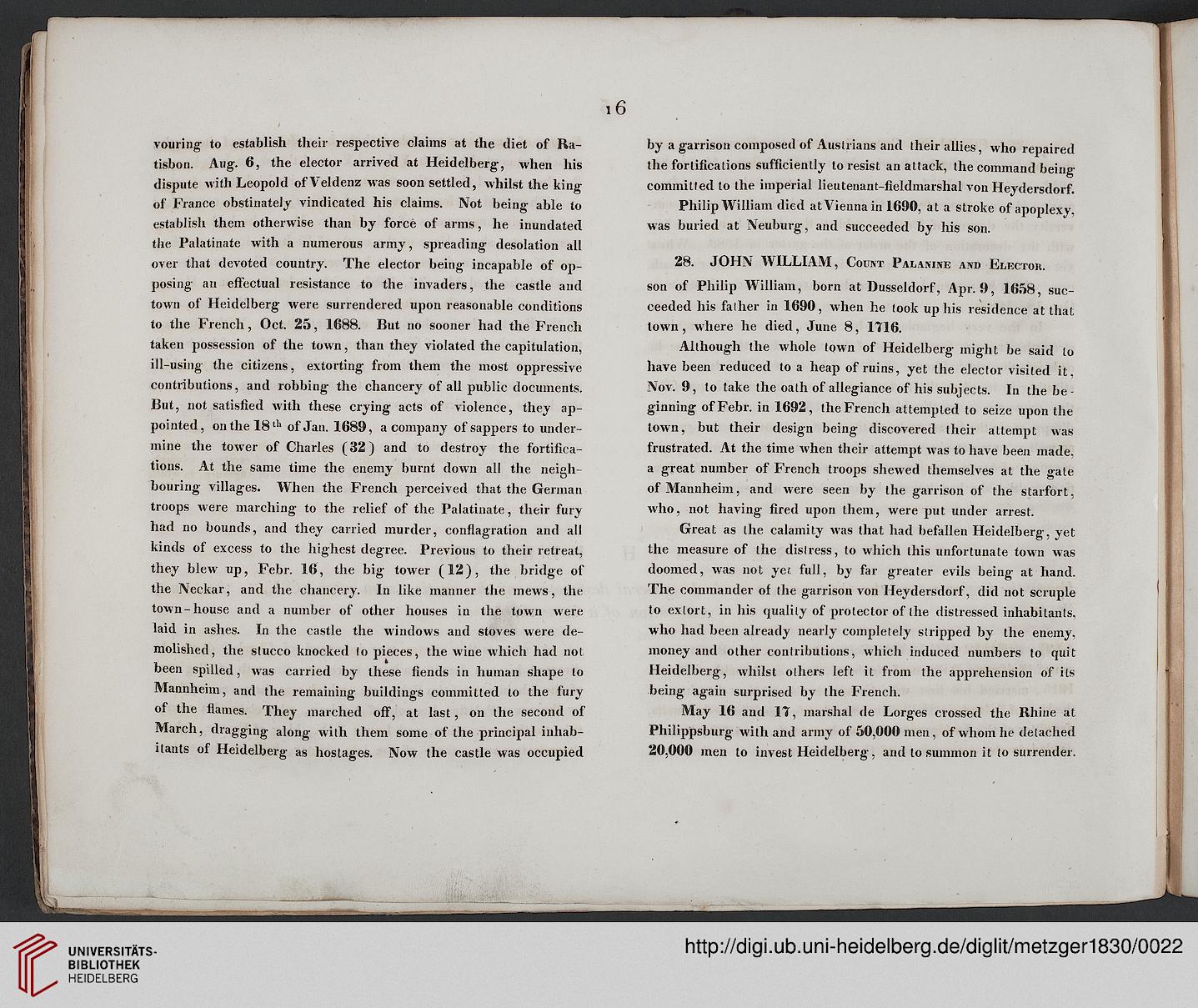 Information about OCR text
vouring to establish their respective claims at the diet of Ra-
tisbon. Aug. 6, the elector arrived at Heidelberg, when his
dispute m'ith Leopold of Veldenz was soon settled, whilst the king
of France obstinately vindicated his claims. Not being able to
establish them otherwise than by force of arms, he inundated
the Palatinate with a numerous army, spreading desolation all
over that devoted country. The elector being incapable of op-
posing an effectual resistance to the invaders, the castle and
town of Heidelberg were surrendered upon reasonable conditions
to the French, Oct. 25, 1688. But no sooner had the French
taken possession of the town, than they violated the capitulation,
ill-using the citizens, extorting from them the most oppressive
contributions, and robbing the chancery of all public documents.
But, not satisfied with these crying acts of violence, they ap-
pointed, on the 18 th of Jan. 1689, a company of sappers to under-
mine the tower of Charles (32) and to destroy the fortifica-
tions. At the same time the enemy burnt down all the neigh-
bouring villages. When the French perceived that the German
troops were marching to the relief of the Palatinate, their fury
had no bounds, and they carried murder, conflagration and all
kinds of excess to the highest degree. Previous to their retreat,
they blew up, Febr. 16, the big tower (12), the bridge of
the Neckar, and the chancery. In like manner the mews, the
town-house and a number of other houses in the town were
laid in ashes. In the castle the windows and stoves were de-
molished, the stucco knocked lo pieces, the wine which had not
been spilled, was carried by these fiends in human shape to
Mannheim, and the remaining buildings committed to the fury
of the flames. They marched off, at last, on the second of
March, dragging along with them some of the principal inhab-
itants of Heidelberg as hostages. Now the castle was occupied

by a garrison composed of Austrians and their allies, who repaired
the fortifications sufficiently to resist an attack, the command being
committed to the imperial lieutenant-fieldmarshal von Heydersdorf.

Philip William died at Vienna in 1690, at a stroke of apoplexy,
was buried at Neuburg, and succeeded by his son.

Although the whole town of Heidelberg might be said lo
have been reduced to a heap of ruins, yet the elector visited it,
Nov. 9, lo take the oath of allegiance of his subjects. In the be-
ginning of Febr. in 1692, the French attempted to seize upon the
town, but their design being discovered their attempt was
frustrated. At the time when their attempt was to have been made,
a great number of French troops shewed themselves at the gate
of Mannheim, and were seen by the garrison of the starfort,
who, not having fired upon them, were put under arrest.

Great as the calamity was that had befallen Heidelberg, yet
the measure of the distress, to which this unfortunate town was
doomed, was not yet full, by far greater evils being at hand.
The commander of the garrison von Heydersdorf, did not scruple
to extort, in his quality of protector of ihe distressed inhabitants,
who had been already nearly completely stripped by the enemy,
money and other contributions, which induced numbers to quit
Heidelberg, whilst others left it from the apprehension of its
being again surprised by the French.

May 16 and IT, marshal de Lorges crossed the Rhine at
Philippsburg with and army of 50,000 men, of whom he detached
20,000 men to invest Heidelberg, and to summon it to surrender.