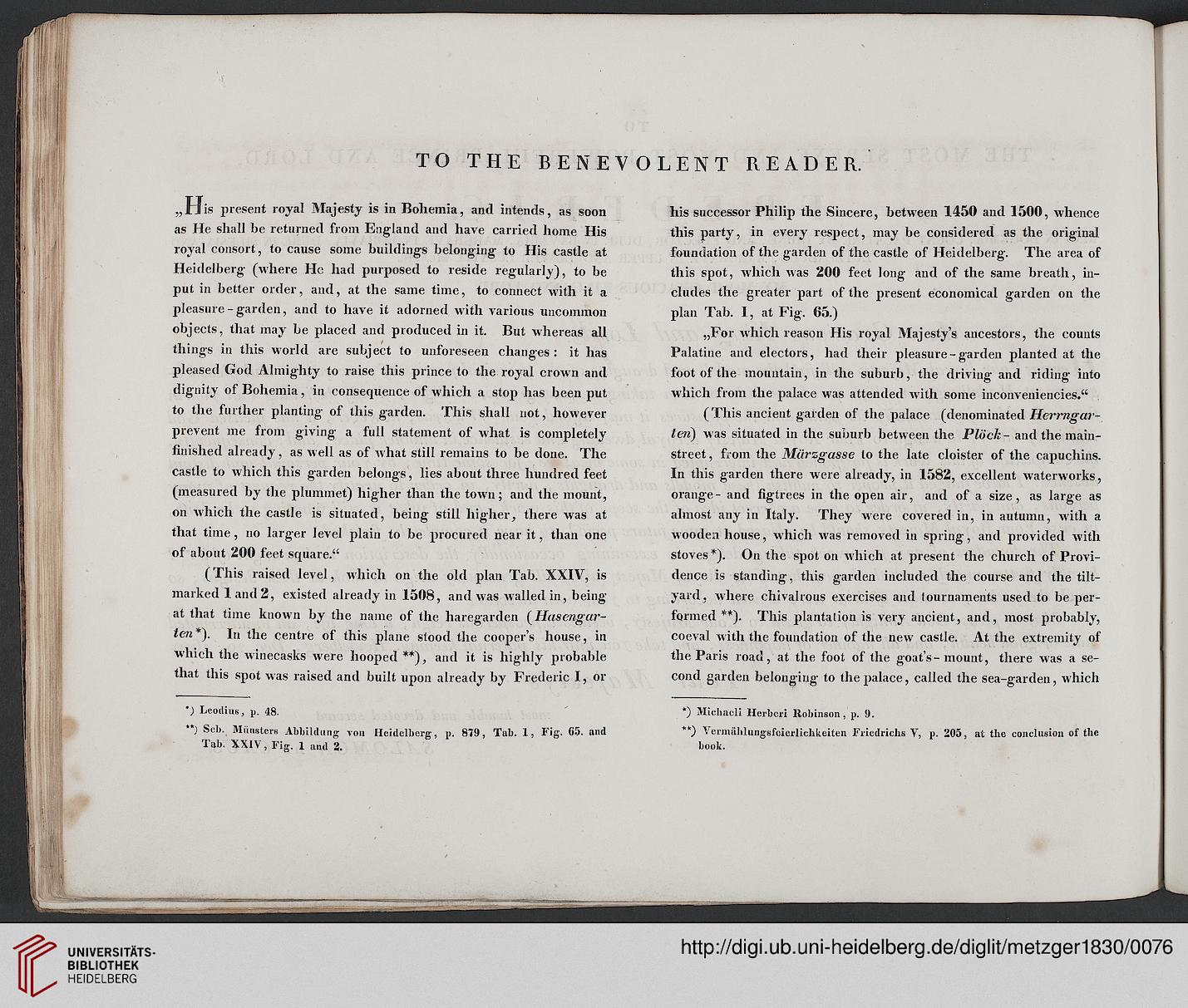 Information about OCR text
TO THE BENE

„ FT is present royal Majesty is in Bohemia, and intends, as soon
as He shall be returned from England and have carried home His
royal consort, to cause some buildings belonging to His castle at
Heidelberg (where He had purposed to reside regularly), to be
put in better order, and, at the same time, to connect with it a
pleasure - garden, and to have it adorned with various uncommon
objects, that may be placed and produced in it. But whereas all
things in this world are subject to unforeseen changes : it has
pleased God Almighty to raise this prince to the royal crown and
dignity of Bohemia, in consequence of which a stop has been put
to the further planting of this garden. This shall not, however
prevent me from giving a full statement of what is completely
finished already, as well as of Avhat still remains to be done. The
castle to which this garden belongs, lies about three hundred feet
(measured by the plummet) higher than the town; and the mount,
on which the castle is situated, being still higher, there was at
that time, no larger level plain to be procured near it, than one
of about 200 feet square."

(This raised level, which on the old plan Tab. XXIV, is
marked 1 and 2, existed already in 1508, and was walled in, being
at that time known by the name of the haregarden (Hasengar-
ten*). In the centre of this plane stood the cooper's house, in
which the winecasks were hooped **), and it is highly probable
that this spot was raised and built upon already by Frederic I, or

his successor Philip the Sincere, between 1450 and 1500, whence
this party, in every respect, may be considered as the original
foundation of the garden of the castle of Heidelberg. The area of
this spot, which was 200 feet long and of the same breath, in-
cludes the greater part of the present economical garden on the
plan Tab. I, at Fig. 65.)

„For which reason His royal Majesty's ancestors, the counts
Palatine and electors, had their pleasure-garden planted at the
foot of the mountain, in the suburb, the driving and riding into
which from the palace was attended with some inconveniencies."

(This ancient garden of the palace (denominated Hermgar-
teri) was situated in the suburb between the Pliick - and the main-
street, from the Miirzgasse to the late cloister of the capuchins.
In this garden there were already, in 1582, excellent waterworks,
orange - and figtrees in the open air, and of a size, as large as
almost any in Italy. They were covered in, in autumn, with a
wooden house, which was removed in spring, and provided with
stoves*). On the spot on which at present the church of Provi-
dence is standing, this garden included the course and the tilt-
yard, where chivalrous exercises and tournaments used to be per-
formed **). This plantation is very ancient, and, most probably,
coeval with the foundation of the new castle. At the extremity of
the Paris road, at the foot of the goat's - mount, there was a se-
cond garden belonging to the palace, called the sea-garden, which

**) Vermiiblungsfcierliclikeiten Fiiedrichs V, p. 205, at the conclusion of the
book.