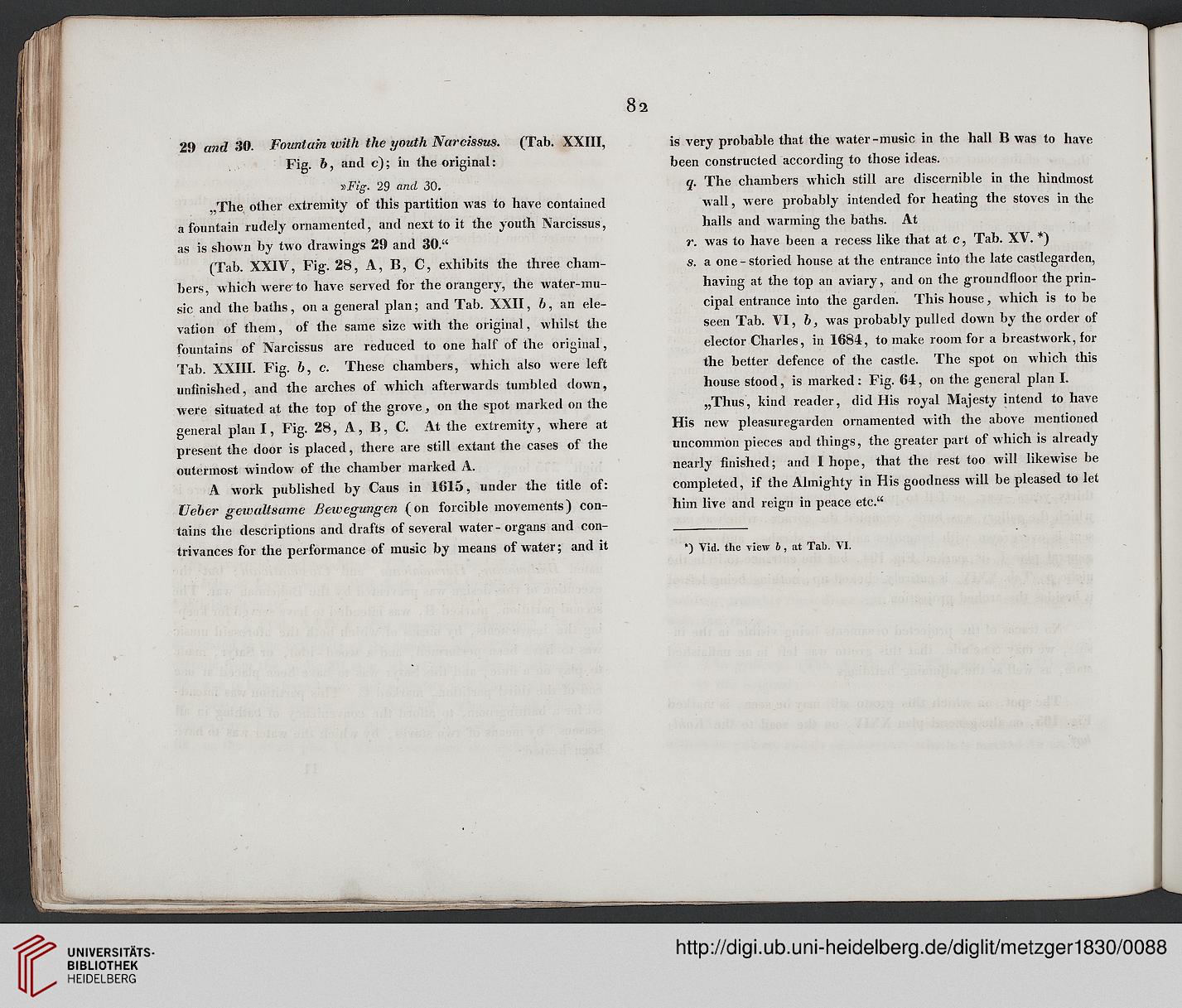 „The other extremity of this partition was to have contained
a fountain rudely ornamented, and next to it the youth Narcissus,
as is shown by two drawings 29 and 30."

(Tab. XXIV, Fig. 28, A, B, C, exhibits the three cham-
bers, which were to have served for the orangery, the water-mu-
sic and the baths, on a general plan; and Tab. XXII, b, an ele-
vation of them, of the same size with the original, whilst the
fountains of Narcissus are reduced to one half of the original,
Tab. XXIII. Fig. b, c. These chambers, which also were left
unfinished, and the arches of which afterwards tumbled down,
were situated at the top of the grove, on the spot marked on the
general plan I, Fig. 28, A, B, C. At the extremity, where at
present the door is placed, there are still extant the cases of the
outermost window of the chamber marked A.

A work published by Caus in 1615, under the title of:
XJeber geivaltsame Bewegungen (on forcible movements) con-
tains the descriptions and drafts of several water-organs and con-
trivances for the performance of music by means of water; and it

is very probable that the water-music in the hall B was to have
been constructed according to those ideas.

q. The chambers which still are discernible in the hindmost
wall, were probably intended for heating the stoves in the
halls and warming the baths. At
r. was to have been a recess like that at c, Tab. XV. *)
s. a one - storied house at the entrance into the late castlegarden,
having at the top an aviary, and on the groundfloor the prin-
cipal entrance into the garden. This house, which is to be
seen Tab. VI, b, was probably pulled down by the order of
elector Charles, in 1684, to make room for a breastwork, for
the better defence of the castle. The spot on which this
house stood, is marked : Fig. 64, on the general plan I.
„Thus, kind reader, did His royal Majesty intend to have
His new pleasuregarden ornamented with the above mentioned
uncommon pieces and things, the greater part of which is already
nearly finished; and I hope, that the rest too will likewise be
completed, if the Almighty in His goodness will be pleased to let
him live and reign in peace etc."