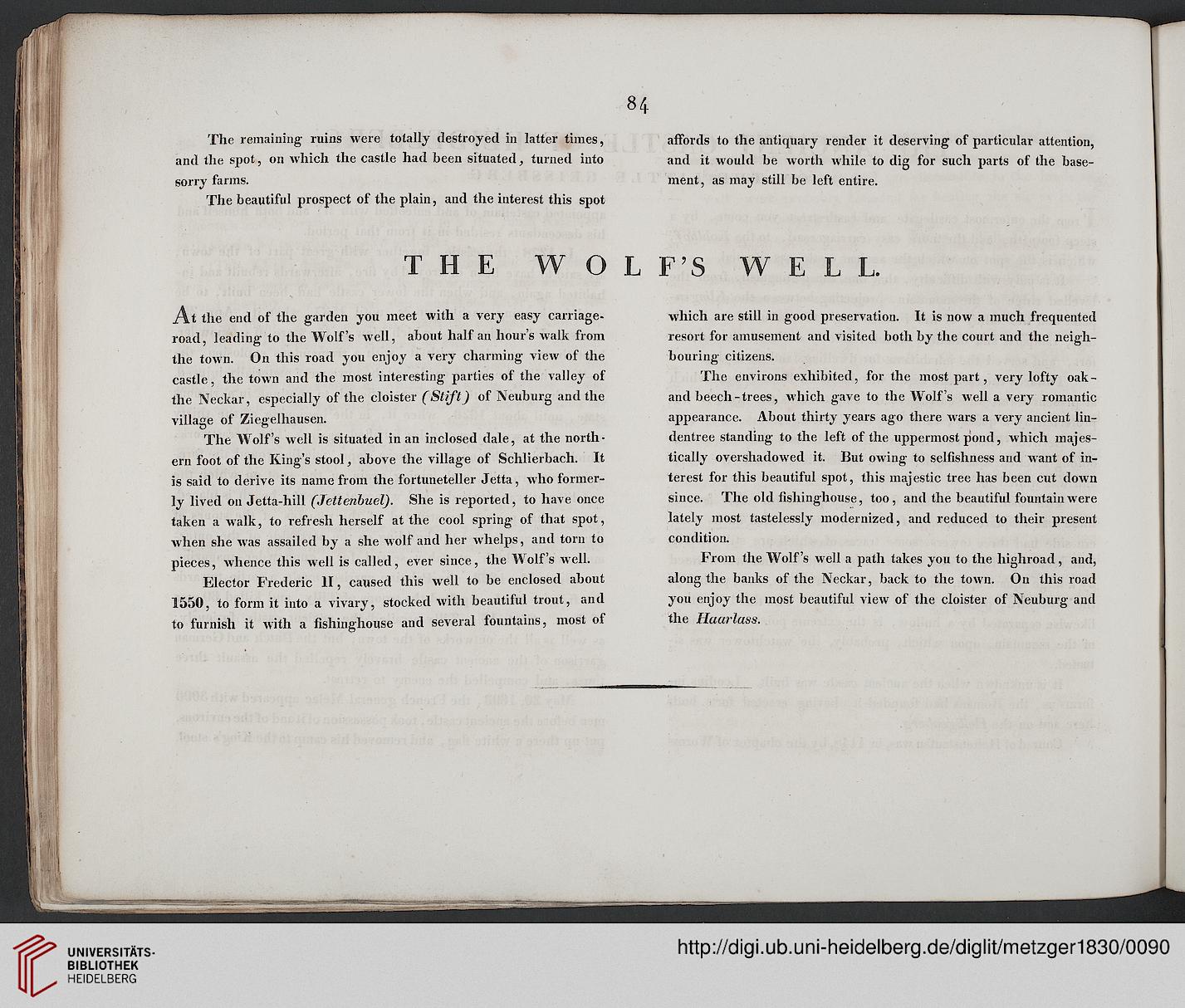 Information about OCR text
The remaining; ruins were totally destroyed in latter times,
and the spot, on which the castle had been situated, turned into
sorry farms.

The beautiful prospect of the plain, and the interest this spot

At the end of the garden you meet with a very easy carriage-
road, leading to the Wolf's well, about half an hour's walk from
the town. On this road you enjoy a very charming view of the
castle, the town and the most interesting parties of the valley of
the Neckar, especially of the cloister (Stift) of Neuburg and the
village of Ziegelhausen.

The Wolf's well is situated in an inclosed dale, at the north-
ern foot of the King's stool, above the village of Schlierbach. It
is said to derive its name from the fortuneteller Jetta, who former-
ly lived on Jetta-hill (Jettenbuel). She is reported, to have once
taken a walk, to refresh herself at the cool spring of that spot,
when she was assailed by a she wolf and her whelps, and torn to
pieces, whence this well is called, ever since, the Wolf's well.

Elector Frederic II, caused this well to be enclosed about
1550, to form it into a vivary, stocked with beautiful trout, and
to furnish it with a fishinghouse and several fountains, most of

affords to the antiquary render it deserving of particular attention,
and it would be worth while to dig for such parts of the base-
ment, as may still be left entire.

which are still in good preservation. It is now a much frequented
resort for amusement and visited both by the court and the neigh-
bouring citizens.

The environs exhibited, for the most part, very lofty oak -
and beech-trees, which gave to the Wolf's well a very romantic
appearance. About thirty years ago there wars a very ancient lin-
dentree standing to the left of the uppermost pond, which majes-
tically overshadowed it. But owing to selfishness and want of in-
terest for this beautiful spot, this majestic tree has been cut down
since. The old fishinghouse, too, and the beautiful fountain were
lately most tastelessly modernized, and reduced to their present
condition.

From the Wolf's well a path takes you to the highroad, and,
along the banks of the Neckar, back to the town. On this road
you enjoy the most beautiful view of the cloister of Neuburg and
the Haarlass.