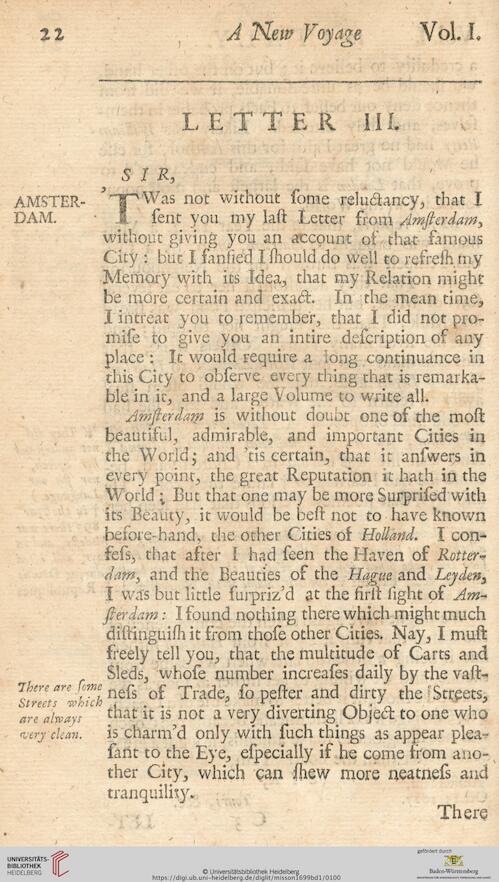 SIR,
AMSTER- ’"Ip Was not without some relustancy, that I
DAM. I sent you my last Letter from Amsterdam,
without giving you an account of that famous
City : but I sanned Ilhould do well to refresh.my
Memory with its Idea, that my Relation might
be more certain and exast. In the mean time,
I intreat you to remember, that I did not pro-
mise to give you an intire description of any
place : It would require a long continuance in
this City to observe every thing that is remarka-
ble in it, and a large Volume to write all.
Amsierdatfi is without doubt one of the most
beautiful, admirable, and important Cities in
the Worldj and ’tis certain, that it answers in
every point, the great Reputation it hath in the
World ; But that one may be more Surprised with
its Beauty, it would be belt not to have known
besore-hand, the other Cities of Holland. I con-
fess, that after I had seen the Haven of Rotter-
dam, and the Beauties of the Hague and Leyden,
I was but little surpriz’d at the firlt sight of Am-
fterdam : I found nothing there which might much
distinguilh it from those other Cities. Nay, I must
freely tell you, that the multitude of Carts and
Sleds, whose number increases daily by the vast-
Trade, so pester and dirty the Strpets,
zirTXJyr U that it is not a very diverting Objest to one who
•very dam. is charm’d only with such things as appear plca-
sant to the Eye, especially if he come from ano- v
ther City, which can Ihew more neatness and
tranquility.