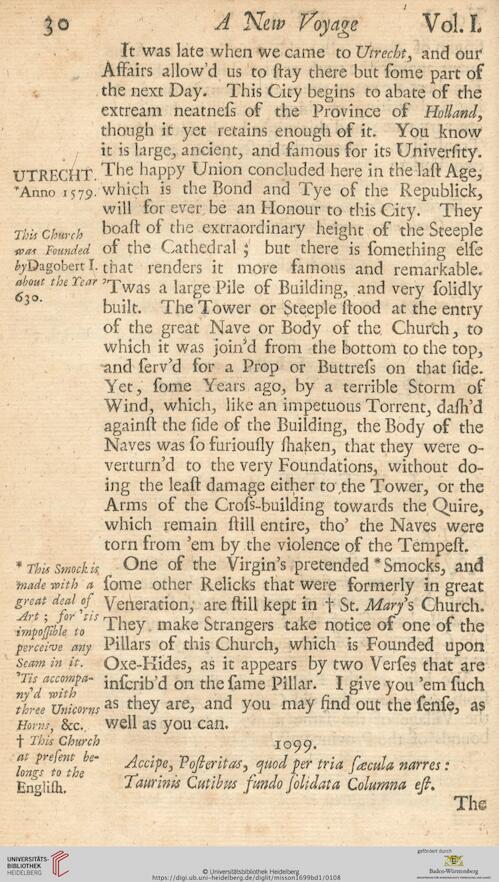 It was late when we came to Utrecht, and our
Affairs allow’d us to flay there but some part of
the next Day. This City begins to abate of the
extream neatness of the Province of Holland,
though it yet retains enough of it. You know
it is large, ancient, and famous for its University.
UTRECHT The happy Union concluded here in the last Age,
’Anno 1579'which is the Bond and Tye of the Republick,
will for ever be an Honour to this City. They
This church hoast of the extraordinary height of the Steeple
do a* Founded of the Cathedral t, but there is something else
^Dagobert I. that renders it more famous and remarkable.
about the Year ”pwas a |arge pj]e of Building, and very solidly
built. The Tower or Steeple (food at the entry
of the great Nave or Body of the Church, to
which it was join’d from the bottom to the top,
and serv’d for a Prop or Buttress on that side.
Yet, some Years ago, by a terrible Storm of
Wind, which, like an impetuous Torrent, dash’d
against the side of the Building, the Body of the
Naves was so furiously ssiaken, that they were o-
verturn’d to the very Foundations, without do-
ing the least damage either to,the Tower, or the
Arms of the Cross-building towards the Quire,
which remain still entire, tho’ the Naves were

torn from ’em by the violence of the Tempest.
* This Smock is. One °f the Virgin’s pretended * Smocks, and
Made with a some other Relicks that were formerly in great
great deal fl Veneration, are still kept in f St. Marys Church.
tnpMed15 They make Strangers take notice of one of the
percei've any Pillars of this Church, which is Founded upon
scam in it. Oxe-Hides, as it appears by two Verses that are
^‘'dwith^ d on thesame Pillar. I give you ’emsuch
X«S«»as ^ey are, and you may find out the sense, as
norm, &c. well as you can.
f This Church 1099.
hdVtTthe1' odccipe, Pofleritas, quod per tria sacula narres:
Engliflj. Taurinis Cutibus sundo Jblidata Columna ess.
Ths