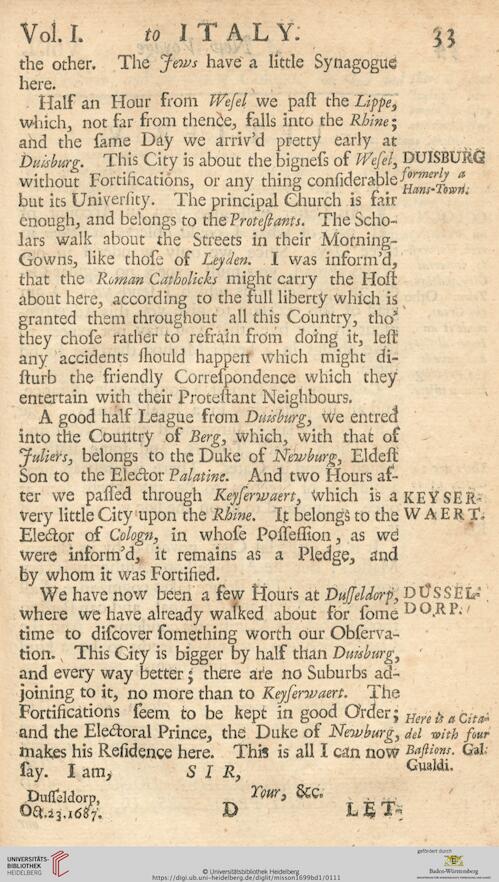 Information about OCR text
Vol.I. in ITALY; 35
the other. The Jews have a little Synagogue
here.
Half an Hour from Wefel we past the Lippe,
which, not far from thende, falls into the Rhine;
and the same Day we arriv’d pretty early at
Duisburg. This City is about the bigness of Wefel, DUISBURG
without Fortifications, or any thing considerable-^”2^ *’
but its Univeriity. The principal Church is fair
enough, and belongs to the Protesiants. The Scho-
lars walk about the Streets in their Morning-
Gowns, like those of Leyden. I was inform’d,
that the Roman Catholicks might carry the Host
about here, according to the full liberty which is
granted them throughout all this Country, thos
they chose rather to refrain from doing it, lest
any accidents should happen which might di-
slurb the friendly Correspondence which they
entertain with their Protestant Neighbours.
A good half League from Duisburg, We entred
into the Country of Berg, which, with that of
Juliers, belongs to the Duke of Newburg, Eldest
Son to the Elector Palatine. And two Hours af-
ter we passed through Keyferwaert, Which is a KEYSER-
Very little City upon the Rhine. It belongs to the W A E R T.
Elestor of Cologn, in whose Possession, as wc
Were inform’d, it remains as a Pledge, and
by whom it was Fortified.
We have now been a few Hours at DuJseUorp, DllsSEL*;
where we have already walked about for some D ’
time to discover something worth our Observa-
tion. v This City is bigger by half than Duisburg,
and every way better; there are no Suburbs ad-
joining to it, no more than to Keyferwaert. The
Fortifications seem to be kept in good Order; Here it a Citat-
and the Electoral Prince, the Duke of Newburg, del with sour
makes his Residence here. This is all I can now Bastitns. Gal.
say. I am, SIR, Gualdi.
Dusseldorp, Tour, 8tC.
D L £ Tn