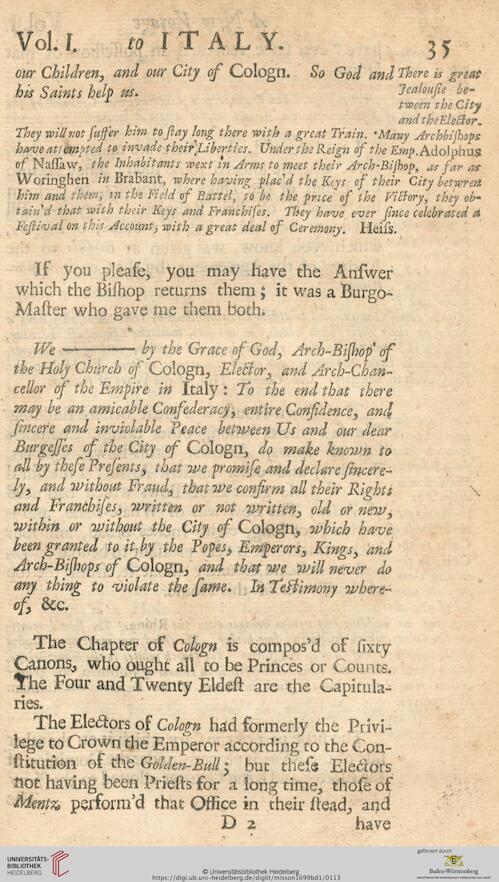 Information about OCR text
If you please, you may have the Answer
which the Bissiop returns them ; it was a Burgo-
Master who gave me them both.

Vol. I. to I T A L Y. 35
our Children, and our City os Cologn. So God and There is great
his Saints help as.
1 tween the City
cmdtfoeElechr.
They will Mt susser him to flay long there with a great Train. -Many ArMijbops
have attempted to invade their L.iberties. Under the R.eign of the Emp. Adolphus
os Nassaw, the Inhabitants wext in Arms to meet their Arch-Bifenp, as sar as
Woringhen in Brabant, where having plac'd the Keys os their City betwreit
him and them, m the Field os Battel, to be the price of the Victory, they ob-
tain d that with their Keys and Franchises, They have ever fence celebrated a
Feftival on this Account, with a great deal os Ceremony. Heits.

We —--by the Grace os God, Arch-Bishop' os
the Holy Church os Cologn, Eleblor, and Arch-Chan-
cellor os the Empire in Italy: To the end that there
may be an amicable Consederacy, entire Considence, ami
sincere and inviolable Peace between Us and our dear
Burgefl’es os the City os Cologn, do make known to
all by these Prefents, that we promise and declare fincere-
ly, and without Fraud, that we confirm all their Righti
and Franthifes, written or not written, old or new,
within or without the City os Cologn, which have
been granted to it by the Popes, Emperors, Kings, and
Arch-Bishops os Cologn, and that we will never do
any thing to violate the same. In Testimony where-
os, &c.
The Chapter of Cologn is compos’d of sixty
Canons, who ought all to be Princes or Counts.
The Four and Twenty Eldest are the Capitula-
ries.
The Ele&ors of Cologn had formerly the Privi-
lege to Crown the Emperor according to the Gon-
stitution of the Golden-Bull j but these Ele&ors
not having been Priests for a long time, those of
Mentz, perform’d that Office in their Bead, and
D 2 have