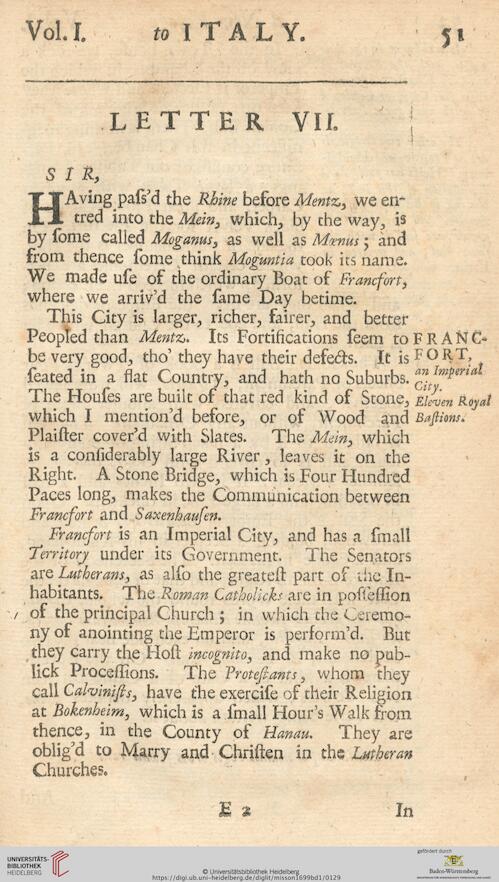 LETTER VII. ‘
SIR,
HAving pass’d the Rhine before Mentz, we err
tred into the Mein, which, by the way, is
by feme called Moganus, as well as Mmus; and
from thence some think Moguntia took its name.
We made use of the ordinary Boat of Francsort,
where we arriv’d the same Day betime.
This City is larger, richer, fairer, and better
Peopled than Mentz. Its Fortifications seem to F R A N C-
be very good, tho’ they have their defeats. It is FORT,
seated in a ssat Country, and hath no Suburbs. ^Imferta
The Houses are built of that red kind of Stone, Eleven Royal
which I mention’d before, or of Wood and Bastions.
Plaister cover’d with Slates. The Mein, which
is a considerably large River, leaves it on the
Right. A Stone Bridge, which is Four Hundred
Paces long, makes the Communication between
Francfort and Saxenhaufen.
Francfort is an Imperial City, and has a small
Territory under its Government. The Senators
are Lutherans, as also the greatelt part of the In-
habitants. The Roman Catholicks are in posiession
/ of the principal Church ; in which the Ceremo-
ny of anointing the Emperor is perform’d. But
they carry the Host incognito, and make no pub-
lick Processions. The Proteftants, whom they
call Calvinisis, have the exercise of their Religion
at Bokenheim, which is a small Hour’s Walk from
thence, in the County of Hanau. They are
oblig’d to Marry and Christen in the Lutheran
Churches.
£ x