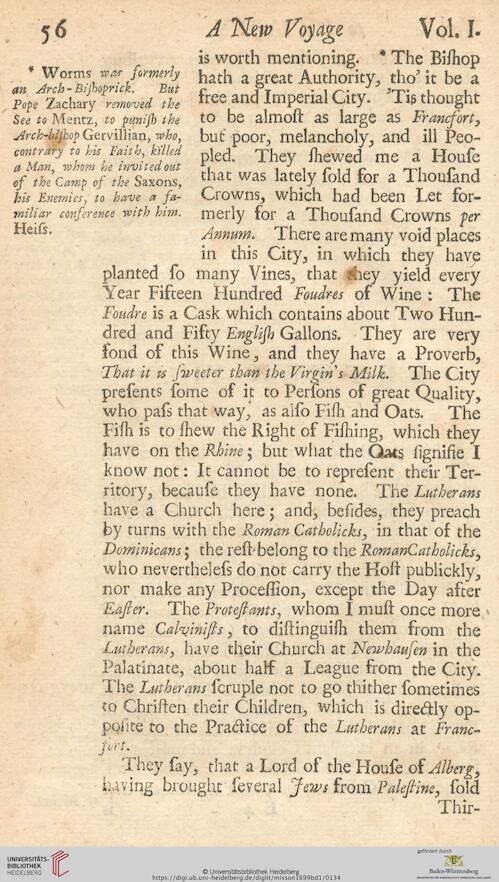 Information about OCR text
A New Voyage Vol. I.
is worth mentioning. * The Bifliop
hath a great Authority, tho’ it be a
free and Imperial City. ’Tip thought
to be almost as large as Francsort,
but poor, melancholy, and ill Peo-
pled. They /hewed me a House
that was lately sold for a Thousand
Crowns, which had been Let for-
merly for a Thousand Crowns yer
Annum. There are many void places
in this City, in which they have
planted so many Vines, that (hey yield every
Year Fifteen Hundred Foudres of Wine : The
Foudre is a Cask which contains about Two Hun-
dred and Fifty Englijh Gallons. They are very
fond of this Wine, and they have a Proverb,
That it k sweeter than the Virgin's Milk. The City
presents some of it to Persons of great Quality,
who pass that way, as also Fifli and Oats. The
Fish is to stiew the Right of Filhing, which they
have on the Rhine; but what the Oats signifie I
know not: It cannot be to represent their Ter-
ritory, because they have none. The Lutherans
have a Church here; and, besides, they preach
by turns with the Roman Catholicks, in that of the
Dominicans; the rest'belong to the RomanCatholicks,
who nevertheless do not carry the Host publickly,
nor make any Procession, except the Day after
Rafi er. The Proteft ants, whom I must once more
name Cahjinlsts, to distinguish them from the
Lutherans, have their Church at Newhausen in the
Palatinate, about half a League from the City.
The Lutherans scruple not to go thither sometimes
to Christen their Children, which is direstly op-
polite to the Practice of the Lutherans at Franc-
They Gy, that a Lord of the House of Alberg,
having brought several Jews from Paleftine, sold
Thir-

5 6
* Worms was sormerly
an jlrch - Bijhoprick. But
Pope Zachary removed the
See to Mentz, to pumsh the
.drch-ldjhop Gervillian, who,
contrary to his Faith, killed
a Man, whom he invited out
os the Camp os the Saxons,
bis Enemies, to have a sa-
miliar conserence with him.