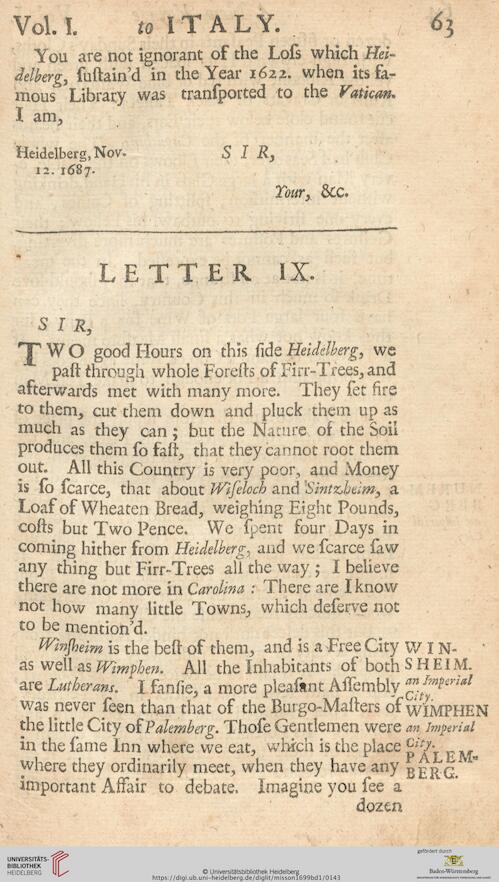 LETTER IX.
SIR,
TWO good Hours on this side Heidelberg, we
past through whole Forests of Fin-1 t ees, and
afterwards met with many more. They set fire
to them, cut them down and pluck them up as
much as they can; but the Nature of the Soil
produces them so fass, that they cannot root them
out. All this Country is very poor, and Money
is so scarce, that about Wifeloch and 'Sintzdoenn, a
Loaf of Wheaten Bread, weighing Eight Pounds,
costs but Two Pence. We spent four Days in
coming hither from Heidelberg, and we scarce saw
any thing but Firr-Trees all the way ; I believe
there are not more in Carolina : There are I know
not how many little Towns, which deserve not
to be mention’d. .
Wlnsneim is the best of them, and is a Free City w 1N-
as well as Wimphen. All the Inhabitants of both S H EIM.
are Lutherans. I fansie, a more pleasitnt Assembly 'l*
was never seen than that of the Burgo-Matters of wiMPHEN
the little City of Palemberg. Those Gentlemen were imperial
in the same Inn where we eat, which is the place £'0^ E
where they ordinarily meet, when they have any berg.
important Affair to debate. Imagine you see a
dozen