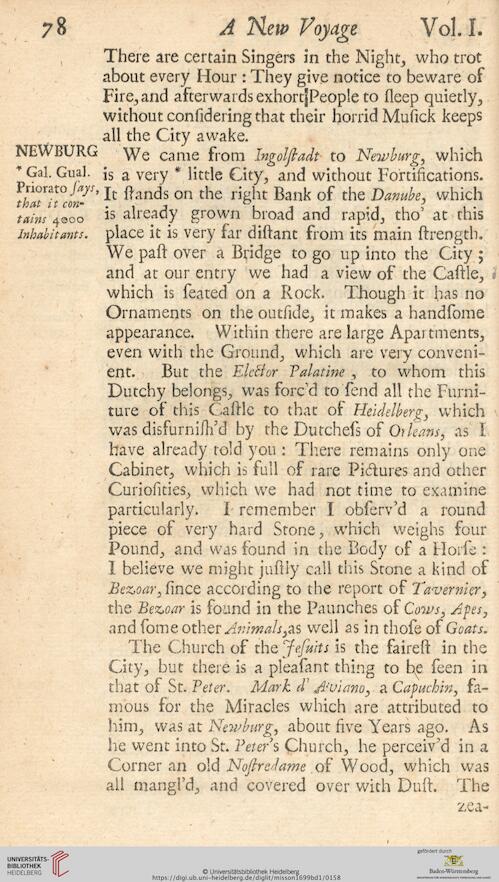 Information about OCR text
78 A New Voyage Vol. I.
There are certain Singers in the Night, who trot
about every Hour : They give notice to beware of
Fire, and afterwards exhort|People to sseep quietly,
without considering that their horrid Musick keeps
all the City awake.
NEWBURG We came from Ingolsiadt to Newburg, which
* Gal. Gual. is a very * little City, and without Fortifications.
!>»n°r>° aj>S’ Hands on the right Bank of the Danube, which
tains 4000 is already grown broad and rapid, tho’ at this
Inhabitants. place it is very far distant from its main strength.
We past over a Bridge to go up into the City ;
and at our entry we had a view of the Castle,
which is seated on a Rock. Though it has no
Ornaments on the outside, it makes a handsome
appearance. Within there are large Apartments,
even with the Ground, which are very conveni-
ent. But the Elector Palatine , to whom this
Dutchy belongs, was forc’d to send all the Furni-
ture of this Castle to that of Heidelberg, which
was disfurnilh’d by the Dutchess of Orleans, as I
have already told you : There remains only one
Cabinet, which is full of rare Piftures and other
Curiosities, which we had not time to examine
particularly. I remember I observ’d a round
piece of very hard Stone, which weighs four
Pound, and was found in the Body of a Horse :
I believe we might justiy call this Stone a kind of
Bezoar, since according to the report of Tavernier,
the Bezoar is found in the Paunches of Cows, Apes,
and some other Animals,as well as in those of Goats.
The Church of the Jefuits is the fairest in the
City, but there is a pleasant thing to he seen in
that of St. Peter. Mark d’ A'uiano, a Capuchin, fa-
mous for the Miracles which are attributed to
him, was at Newburg, about five Years ago. As
he went into St. Peter’s Church, he perceiv’d in a
Corner an old Nofiredame of Wood, which was
all mangl’d, and covered over with Dust. The
zea-