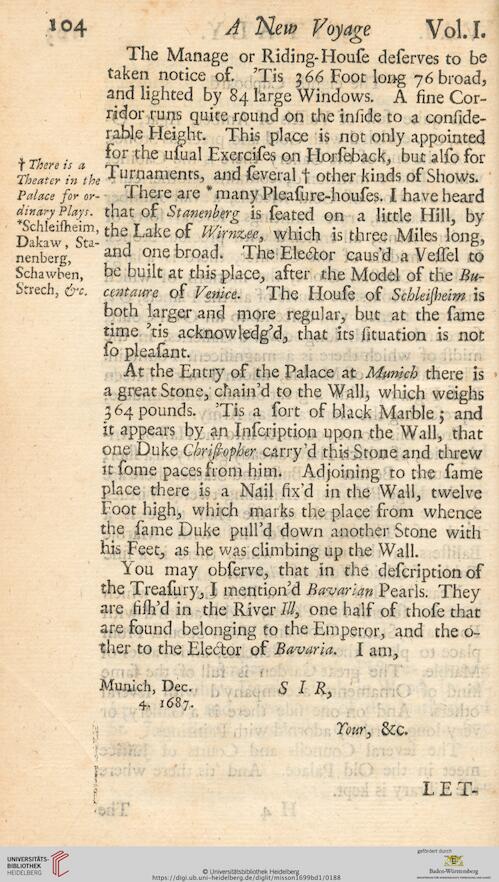 A New Voyage Vol. I.
The Manage or Riding-House deserves to be
taken notice of. ’Tis ;66 Foot long 76 broad,
and lighted by 84 large Windows. A fine Cor-
ridor runs quite round on the inside to a conside-
rable Height. This place is not only appointed
for the usual Exercises on Horseback, but also for
Turnaments, and several f other kinds of Shows.
There are * many Pleasure-houses. I have heard
that of Stanenberg is seated on a little Hill, by
the Lake of Wirnzee, which is three Miles long,
and one broad. The Eledlor caus’d a Vessel to
be built at this place, after the Model of the Bu-
centaure of Venice. The Houle of Schleisheim is
both larger and more regular, but at the same
time ’tis acknowledg’d, that its situation is not
so pleasant.
At the Entry of the Palace at Munich there is
a great Stone, chain’d to the Wall, which weighs
364 pounds. ’Tis a sort of black Marble ; and
it appears by an Jnscription upon the Wall, that
one Duke Chrifiopher carry’d this Stone and threw
it some paces from him. Adjoining to the same
place there is a Nail fix’d in the Wall, twelve
Foot high, which marks the place from whence
the same Duke pull’d down another Stone with
his Feet, as he was climbing up the Wall.
You may observe, that in the description of
the Treasury, I mention’d Bavarian Pearls. They
are filh’d in the River III, one half of those that
are found belonging to the Emperor, and the o-
ther to the Elector of Bavaria. I am,
Munich, Dec. SIR,
4. 1687.
Your, &C.
LET-