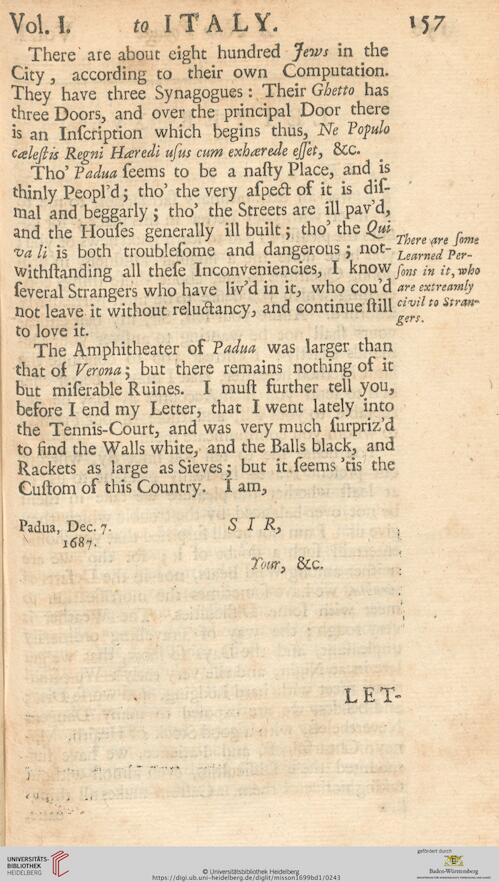 Information about OCR text
Vol. I. to ITALY. 157
There are about eight hundred Jews in the
City, according to their own Computation.
They have three Synagogues: Their Ghetto has
three Doors, and over the principal Door there
is an Inscription which begins thus, Ne Populo
calefiis Regm Haredl usus cum exharede eJet, SiC.
Tho’ Radua seems to be a nasty Place, and is
thinly Peopl’d; tho’ the very aspeft of it is dis-
There are same
Mzithstanding all these Inconveniences, I knowym
several Strangers who have liv’d in it, who cou’d are extreamly
not leave it without reludlancy, and continue still e™1" stran-
to love it. S!rr'
The Amphitheater of Radua was larger than
that of Verona; but there remains nothing of it
but miserable Ruines. I must further tell you,
before I end my Letter, that I went lately into
the Tennis-Court, and was very much surpriz’d
to find the Walls white, and the Balls black, and
Rackets as large as Sieves; but it. seems’tis the
Custom os this Country. I am,
Padua, Dec. 7. SIR,
1687. ’
Tour, &c.

ttial and beggarly ; tho the Streets are ill pav d,
and the Houses generally ill built; tho’ the Qui
va H is both troublesome and dangerous: not-