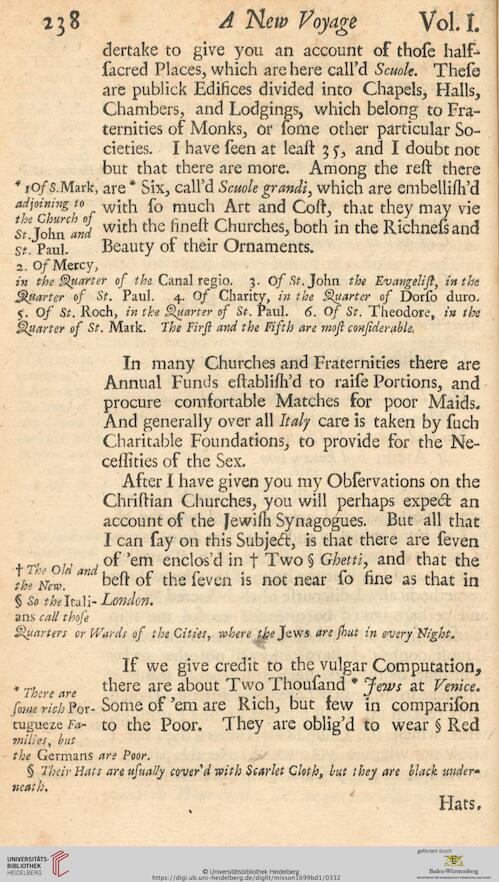 Information about OCR text
238 A TSLew Voyage Vol. I.
dertake to give you an account of those half-
sacred Places, which are here call’d Scuok. These
are publick Edifices divided into Chapels, Halls,
Chambers, and Lodgings, which belong to Fra-
ternities of Monks, or some other particular So-
cieties. I have seen at leatt ; y, and I doubt not
but that there are more. Among the rest there
* iof s.Mark, are * Six, call’d Scuole grand!, which are embellissi’d
adjoining to wjt|I so niuch Art and Cost, that they may vie
^t John and t*ie Churches, both in the Richnessand
st. Paul. Beauty of their Ornaments.
2. Os Mercy,
in the Quarter os the Canal regio. 3. Os St. John the Evangelifl, in the
Quarter os St. Paul. 4. Of Charity, in the Quarter os Dorso duro.
5'. Of St. Roch, in the Quarter os St. Paul. 6. Os St. Theodore, in the
Quarter os St. Mark. The Firfl and the Fisth are moss confiderMe.
In many Churches and Fraternities there are
Annual Funds establissi’d to raise Portions, and
procure comfortable Matches for poor Maids.
And generally over all Italy care is taken by such
Charitable Foundations, to provide for the Ne-
cessities of the Sex.
After I have given you my Observations on the
Christian Churches, you will perhaps expect an
account of the Jewilh Synagogues. But all that
I can say on this Subject, is that there are seven
, , of’em enclos’d in f Two § Ghetti, and that the
the New" an best of the seven is not near so fine as that in
§ So theltah- London.
a ns call thofe
Quarters or Wards of the Cities, where tlge Jews are fhut in every Flight.
If we give credit to the vulgar Computation,
* Th -re are there are about Two Thousand * Jews at Venice,
same rich Por- Some of ’em are Rich, but few in comparison
tugueze Fa- to the Poor. They are oblig’d to wear § Red
milies, but
the Germans are Poor.
§ Their Hats are usually cover’d with Scarlet Cloth, but they are black under-
neath.
Flats.