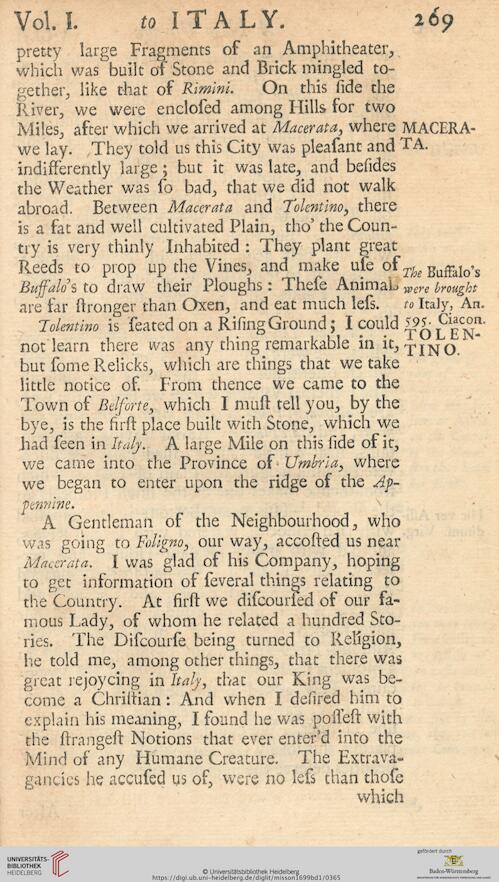 Information about OCR text
Vol. I. to ITALY. 2(S?
pretty large Fragments of an Amphitheater,
which was built of Stone and Brick mingled to-
gether, like that of Rimini. On this side the
River, we were enclosed among Hills for two
Miles, after which we arrived at Macerata, where MACERA-
we lay. They told us this City was pleasant and TA.
indifferently large; but it was late, and besides
the Weather was so bad, that we did not walk
abroad. Between Macerata and Tolentino, there
is a fat and well cultivated Plain, tho’ the Coun-
try is very thinly Inhabited : They plant great
Reeds to prop up the Vines and make use of The Buffalo,s
Bussalo s to draw their Ploughs: 1 hele AmmaL were brought
are far stronger than Oxen, and eat much less. to Italy, An.
Tolentino is seated on a Riling Ground; I could TC1pC°n‘
not learn there was any thing remarkable in it,
but some Relicks, which are things that we take
little notice of. From thence we came to the
Town of Belsorte, which I must tell you, by the
bye, is the first place built with Stone, which we
had seen in Italy. A large Mile on this side of it,
we came into the Province of Umbria, where
we began to enter upon the ridge of the Ap-
pennine.
A Gentleman of the Neighbourhood, who
was going to Foligno, our way, accosted us near
Macerata. I was glad of his Company, hoping
to get information of several things relating to
the Country. At first we diseoursed of our fa-
mous Lady, of whom he related a hundred Sto-
ries. The Discourse being turned to Religion,
he told me, among other things, that there was
great rejoycing in Italy, that our King was be-
come a Christian: And when I desired him to
explain his meaning, I found he was possest with
the strangest Notions that ever enter’d into the
Mind of any Humane Creature. The Extrava-
gancies he accused us of, were no less than thosc
which