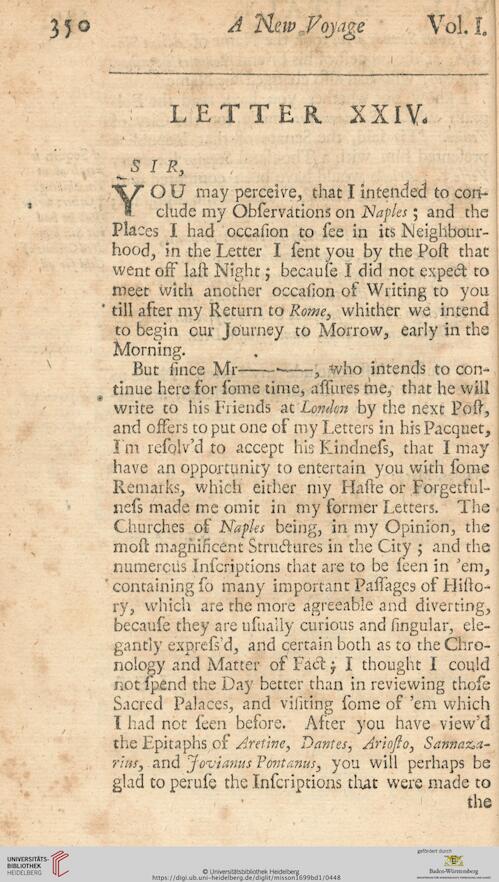 LETTER XXIV.
I R,
YO U may perceive, that I intended to con-
clude my Observations on Naples; and the
Places I had occasion to see in its Neighbour-
hood, in the Letter I sent you by the Post that
went osf last Night; because I did not expect to
meet with another occasion of Writing to you
' till after my Return to Rome, whither we intend
to begin cur Journey to Morrow, early in the
Morning.
But since Mr-•-, who intends to con-
tinue here for some time, assures me, that he will
write to his Friends at London by the next Poll,
and offers to put one of my Letters in hisPacquet,
I’m rcsolv’d to accept his Kindness, that I may
have an opportunity to entertain you with some
Remarks, which either my Haste or Forgetful-
ness made me omit in my former Letters. The
Churches of Naples being, in my Opinion, the
moil magnificent Structures in the City ; and the
numerous Inscriptions that are to be seen in 'em,
containing so many important Passagcs of Hiflo-
ry, which are rhe more agreeable and diverting,
because they are usually curious and Angular, ele-
gantly express’d, and certain both as to the Chro-
nology and Matter of Fad , I thought I could
not spend the Day better than in reviewing those
Sacred Palaces, and visiting some of ’em which
I had not seen before. After you have view’d
the Epitaphs of Aretine, Dantes, Ariosio, Sahna&a-
rius, and JovianusRontanus, you will perhaps be
glad to perusc the Inscriptions that were made to
the