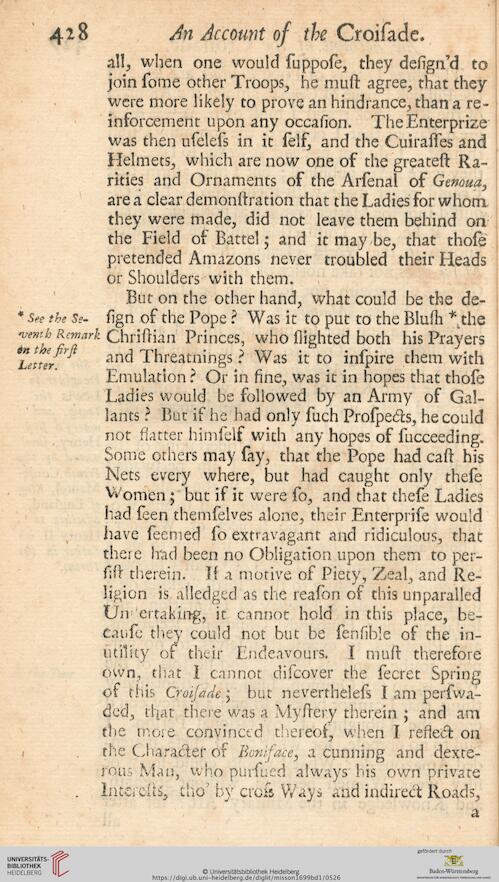 Information about OCR text
428 Jn Account os the Croisade.
all, when one would suppose, they design’d to
join some other Troops, he must agree, that they
were more likely to prove an hindrance, than a re-
inforcement upon any occasion. The Enterprize
was then useless in it self, and the Cuirasses and
Helmets, which are now one of the greatest Ra-
rities and Ornaments of the Arsenal of Genoua,
area clear demonstration that the Ladies for whom,
they were made, did not leave them behind on
the Field of Battel; and it may be, that those
pretended Amazons never troubled their Heads
or Shoulders with them.
But on the other hand, what could be the de-
* See the Se- sign of the Pope ? Was it to put to the Blulh * the
nrenth Remark Christian Princes, who slighted both his Prayers
inthe sirft and Threatnings ? Was it to inspire them with
Emulation ? Or in nne^ was it in hopes that thole
Ladies would be followed by an Army of Gal-
lants ? But if he had only such Prospeds, he could
not ssatter himself with any hopes of succeeding.
Some others may say, that the Pope had cast his
Nets every where, but had caught only these
Women; but if it were so, and that these Ladies
had seen themselves alone, their Enterprise would
have seemed so extravagant and ridiculous, that
there had been no Obligation upon them to per-
sist therein. If a motive of Piety, Zeal, and Re-
ligion is alledged as the reason of this unparalled
Um'ertaking, it cannot hold in this place, be-
cause they could not but be sensible of the in-
utility of their Endeavours. I must therefore
own, that 1 cannot discover the secret Spring
of this Croljade; but nevertheless I am perswa-
ded, that there was a Mystery therein ; and am
the more convinced thereof, when I ressed on
the Charades os Boniface, a cunning and dexte-
rous Man, who pursued always his own private
Intercsts, tlio’ by crofs Ways and indited Roads,
a