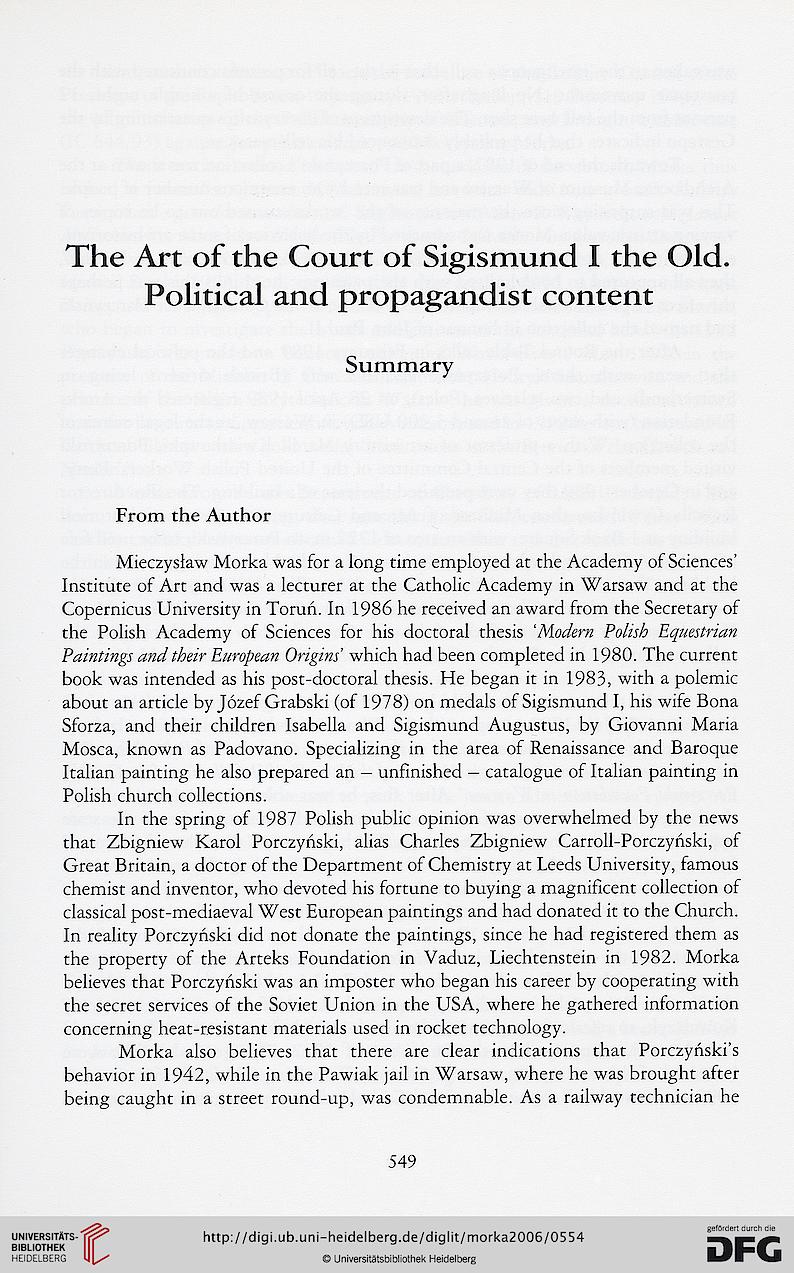 Scroll
OCR fulltext
Information about OCR text
The Art of the Court of Sigismund I the Old.
Political and propagandist content

From the Author
Mieczysław Morka was for a łong time employed at the Academy of Sciences'
Institute of Art and was a łecturer at the Catholic Academy in Warsaw and at the
Copernicus University in Toruń. In 1986 he received an award from the Secretary of
the Polish Academy of Sciences for his doctorał thesis 'Afo<7ef72 Tb/ńń
which had been completed in 1980. The current
book was intended as his post-doctoral thesis. He began it in 1983, with a polemic
about an article by Józef Grabski (of 1978) on medals of Sigismund I, his wife Bona
Sforza, and their chiłdren Isabella and Sigismund Augustus, by Giovanni Maria
Mosca, known as Padovano. Specializing in the area of Renaissance and Baroque
Italian painting he also prepared an — unfinished - catalogue of Itałian painting in
Polish church collections.
In the spring of 1987 Polish public opinion was overwhelmed by the news
that Zbigniew Karol Porczyński, alias Charles Zbigniew Carroll-Porczyński, of
Great Britain, a doctor of the Department of Chemistry at Leeds University, famous
chemist and inventor, who devoted his fortunę to buying a magnificent collection of
classical post-mediaeval West European paintings and had donated it to the Church.
In reality Porczyński did not donate the paintings, sińce he had registered them as
the property of the Arteks Foundation in Vaduz, Liechtenstein in 1982. Morka
believes that Porczyński was an imposter who began his career by cooperating with
the secret services of the Soviet Union in the USA, where he gathered infbrmation
concerning heat-resistant materials used in rocket technology.
Morka also believes that there are elear indications that Porczyńskie
behavior in 1942, while in the Pawiak jail in Warsaw, where he was brought after
being caught in a Street round-up, was condemnable. As a railway technician he