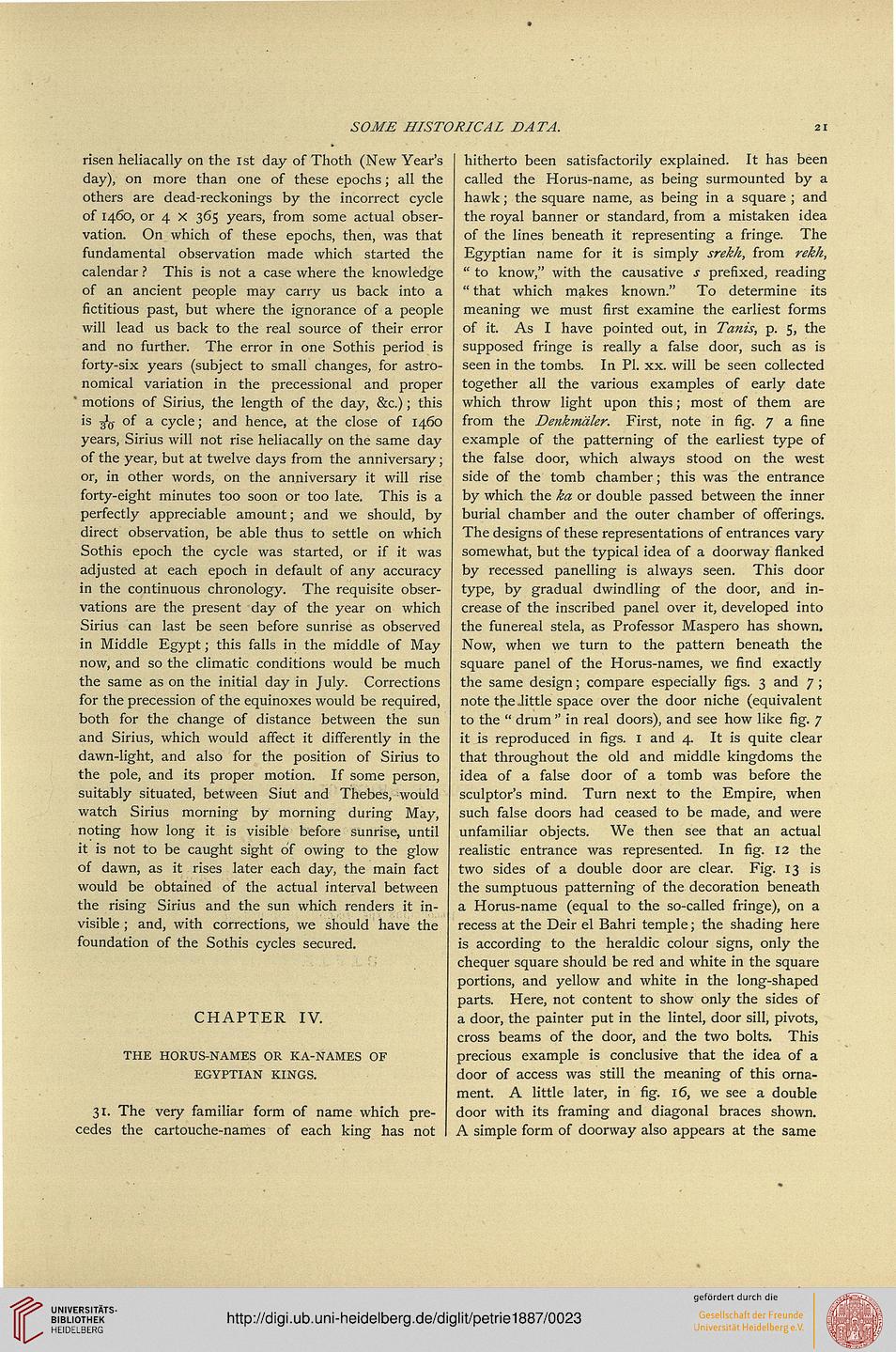 risen heliacally on the 1st day of Thoth (New Year's
day), on more than one of these epochs; all the
others are dead-reckonings by the incorrect cycle
of 1460, or 4 x 365 years, from some actual obser-
vation. On which of these epochs, then, was that
fundamental observation made which started the
calendar ? This is not a case where the knowledge
of an ancient people may carry us back into a
fictitious past, but where the ignorance of a people
will lead us back to the real source of their error
and no further. The error in one Sothis period is
forty-six years (subject to small changes, for astro-
nomical variation in the precessional and proper
" motions of Sirius, the length of the day, &c.); this
is -g^- of a cycle; and hence, at the close of 1460
years, Sirius will not rise heliacally on the same day
of the year, but at twelve days from the anniversary;
or, in other words, on the anniversary it will rise
forty-eight minutes too soon or too late. This is a
perfectly appreciable amount; and we should, by
direct observation, be able thus to settle on which
Sothis epoch the cycle was started, or if it was
adjusted at each epoch in default of any accuracy
in the continuous chronology. The requisite obser-
vations are the present day of the year on which
Sirius can last be seen before sunrise as observed
in Middle Egypt; this falls in the middle of May
now, and so the climatic conditions would be much
the same as on the initial day in July. Corrections
for the precession of the equinoxes would be required,
both for the change of distance between the sun
and Sirius, which would affect it differently in the
dawn-light, and also for the position of Sirius to
the pole, and its proper motion. If some person,
suitably situated, between Siut and Thebes, would
watch Sirius morning by morning during May,
noting how long it is visible before sunrise, until
it is not to be caught sight of owing to the glow
of dawn, as it rises later each day, the main fact
would be obtained of the actual interval between
the rising Sirius and the sun which renders it in-
visible ; and, with corrections, we should have the
foundation of the Sothis cycles secured.

31. The very familiar form of name which pre-
cedes the cartouche-names of each king has not

hitherto been satisfactorily explained. It has been
called the Horiis-name, as being surmounted by a
hawk; the square name, as being in a square ; and
the royal banner or standard, from a mistaken idea
of the lines beneath it representing a fringe. The
Egyptian name for it is simply srekk, from rekk,
" to know," with the causative s prefixed, reading
" that which makes known." To determine its
meaning we must first examine the earliest forms
of it. As I have pointed out, in Tarns, p. 5, the
supposed fringe is really a false door, such as is
seen in the tombs. In PL xx. will be seen collected
together all the various examples of early date
which throw light upon this; most of them are
from the Denkmaler. First, note in fig. 7 a fine
example of the patterning of the earliest type of
the false door, which always stood on the west
side of the tomb chamber; this was the entrance
by which the ka or double passed between the inner
burial chamber and the outer chamber of offerings.
The designs of these representations of entrances vary
somewhat, but the typical idea of a doorway flanked
by recessed panelling is always seen. This door
type, by gradual dwindling of the door, and in-
crease of the inscribed panel over it, developed into
the funereal stela, as Professor Maspero has shown.
Now, when we turn to the pattern beneath the
square panel of the Horus-names, we find exactly
the same design; compare especially figs. 3 and 7;
note the Jittle space over the door niche (equivalent
to the " drum " in real doors), and see how like fig. 7
it is reproduced in figs. 1 and 4. It is quite clear
that throughout the old and middle kingdoms the
idea of a false door of a tomb was before the
sculptor's mind. Turn next to the Empire, when
such false doors had ceased to be made, and were
unfamiliar objects. We then see that an actual
realistic entrance was represented. In fig. 12 the
two sides of a double door are clear. Fig. 13 is
the sumptuous patterning of the decoration beneath
a Horus-name (equal to the so-called fringe), on a
recess at the Deir el Bahri temple; the shading here
is according to the heraldic colour signs, only the
chequer square should be red and white in the square
portions, and yellow and white in the long-shaped
parts. Here, not content to show only the sides of
a door, the painter put in the lintel, door sill, pivots,
cross beams of the door, and the two bolts. This
precious example is conclusive that the idea of a
door of access was still the meaning of this orna-
ment. A little later, in fig. 16, we see a double
door with its framing and diagonal braces shown.
A simple form of doorway also appears at the same