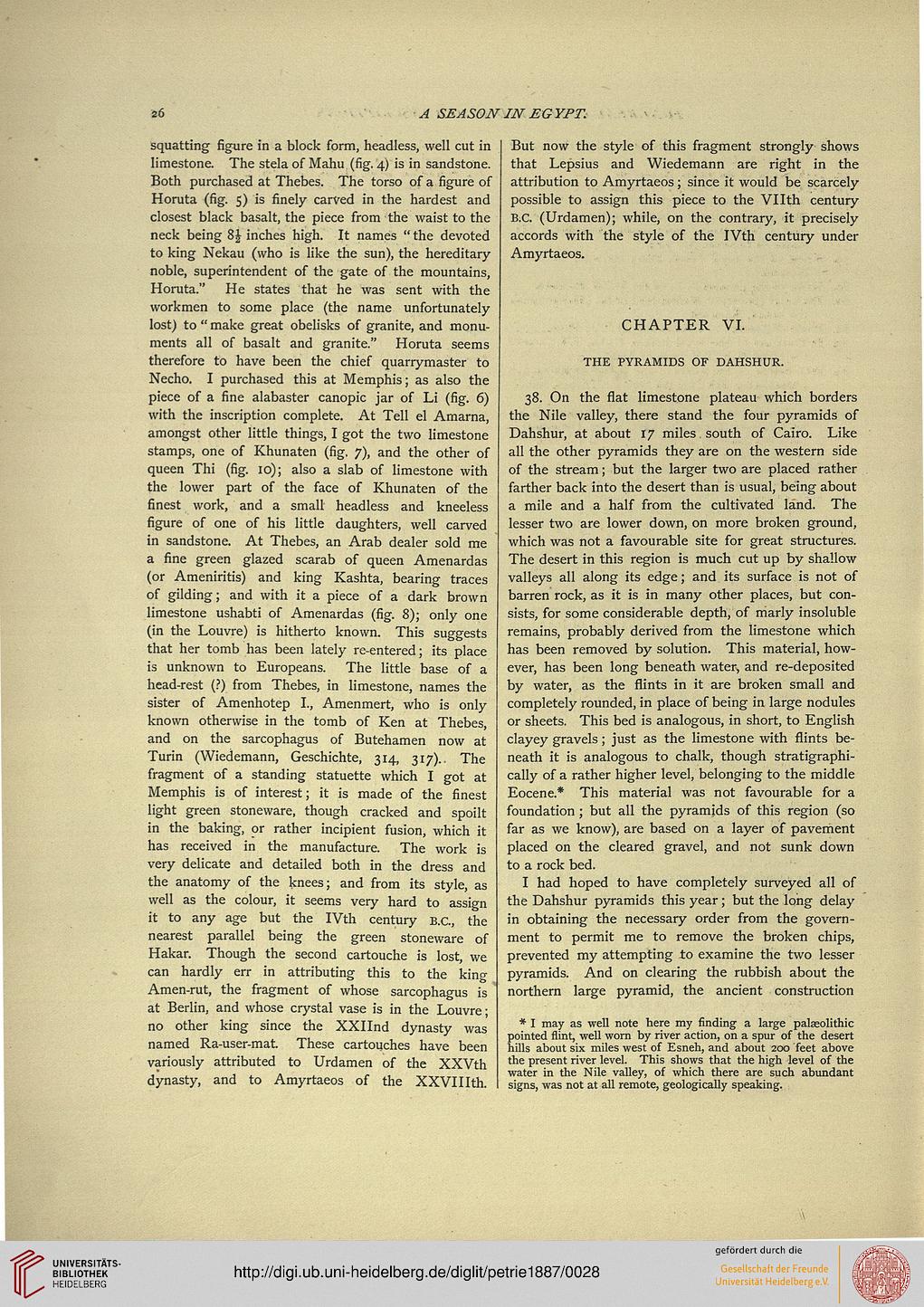 A SEASON IN EGYPT,

squatting figure in a block form, headless, well cut in
limestone. The stela of Mahu (fig. 4) is in sandstone.
Both purchased at Thebes. The torso of a figure of
Horuta (fig. 5) is finely carved in the hardest and
closest black basalt, the piece from the waist to the
neck being 8J inches high. It names " the devoted
to king Nekau (who is like the sun), the hereditary
noble, superintendent of the gate of the mountains,
Horuta." He states that he was sent with the
workmen to some place (the name unfortunately
lost) to " make great obelisks of granite, and monu-
ments all of basalt and granite." Horuta seems
therefore to have been the chief quarrymaster to
Necho. I purchased this at Memphis; as also the
piece of a fine alabaster canopic jar of Li (fig. 6)
with the inscription complete. At Tell el Amarna,
amongst other little things, I got the two limestone
stamps, one of Khunaten (fig. 7), and the other of
queen Thi (fig. 10); also a slab of limestone with
the lower part of the face of Khunaten of the
finest work, and a small headless and kneeless
figure of one of his little daughters, well carved
in sandstone. At Thebes, an Arab dealer sold me
a fine green glazed scarab of queen Amenardas
(or Ameniritis) and king Kashta, bearing traces
of gilding; and with it a piece of a dark brown
limestone ushabti of Amenardas (fig. 8); only one
(in the Louvre) is hitherto known. This suggests
that her tomb has been lately re-entered; its place
is unknown to Europeans. The little base of a
head-rest (?) from Thebes, in limestone, names the
sister of Amenhotep I., Amenmert, who is only
known otherwise in the tomb of Ken at Thebes,
and on the sarcophagus of Butehamen now at
Turin (Wiedemann, Geschichte, 314, 317).. The
fragment of a standing statuette which I got at
Memphis is of interest; it is made of the finest
light green stoneware, though cracked and spoilt
in the baking, or rather incipient fusion, which it
has received in the manufacture. The work is
very delicate and detailed both in the dress and
the anatomy of the knees; and from its style, as
well as the colour, it seems very hard to assign
it to any age but the IVth century B.C., the
nearest parallel being the green stoneware of
Hakar. Though the second cartouche is lost, we
can hardly err in attributing this to the king
Amen-rut, the fragment of whose sarcophagus is
at Berlin, and whose crystal vase is in the Louvre;
no other king since the XXIInd dynasty was
named Ra-user-mat These cartouches have been
variously attributed to Urdamen of the XXVth
dynasty, and to Amyrtaeos of the XXVII Ith.

But now the style of this fragment strongly shows
that Lepsius and Wiedemann are right in the
attribution to Amyrtaeos; since it would be scarcely
possible to assign this piece to the VI Ith century
B.C. (Urdamen); while, on the contrary, it precisely
accords with the style of the IVth century under
Amyrtaeos.

THE PYRAMIDS OF DAHSHUR.

38. On the flat limestone plateau which borders
the Nile valley, there stand the four pyramids of
Dahshur, at about 17 miles. south of Cairo. Like
all the other pyramids they are on the western side
of the stream; but the larger two are placed rather
farther back into the desert than is usual, being about
a mile and a half from the cultivated land. The
lesser two are lower down, on more broken ground,
which was not a favourable site for great structures.
The desert in this region is much cut up by shallow
valleys all along its edge; and.its surface is not of
barren rock, as it is in many other places, but con-
sists, for some considerable depth, of marly insoluble
remains, probably derived from the limestone which
has been removed by solution. This material, how-
ever, has been long beneath water, and re-deposited
by water, as the flints in it are broken small and
completely rounded, in place of being in large nodules
or sheets. This bed is analogous, in short, to English
clayey gravels; just as the limestone with flints be-
neath it is analogous to chalk, though stratigraphi-
cally of a rather higher level, belonging to the middle
Eocene* This material was not favourable for a
foundation ; but all the pyramids of this region (so
far as we know), are based on a layer of pavement
placed on the cleared gravel, and not sunk down
to a rock bed.

I had hoped to have completely surveyed all of
the Dahshur pyramids this year; but the long delay
in obtaining the necessary order from the govern-
ment to permit me to remove the broken chips,
prevented my attempting ±0 examine the two lesser
pyramids. And on clearing the rubbish about the
northern large pyramid, the ancient construction

* I may as well note here my finding a large palaeolithic
pointed flint, well worn by river action, on a spur of the desert
hills about six miles west of Esneh, and about 200 feet above
the present river level. This shows that the high level of the
water in the Nile valley, of which there are such abundant
signs, was not at all remote, geologically speaking.