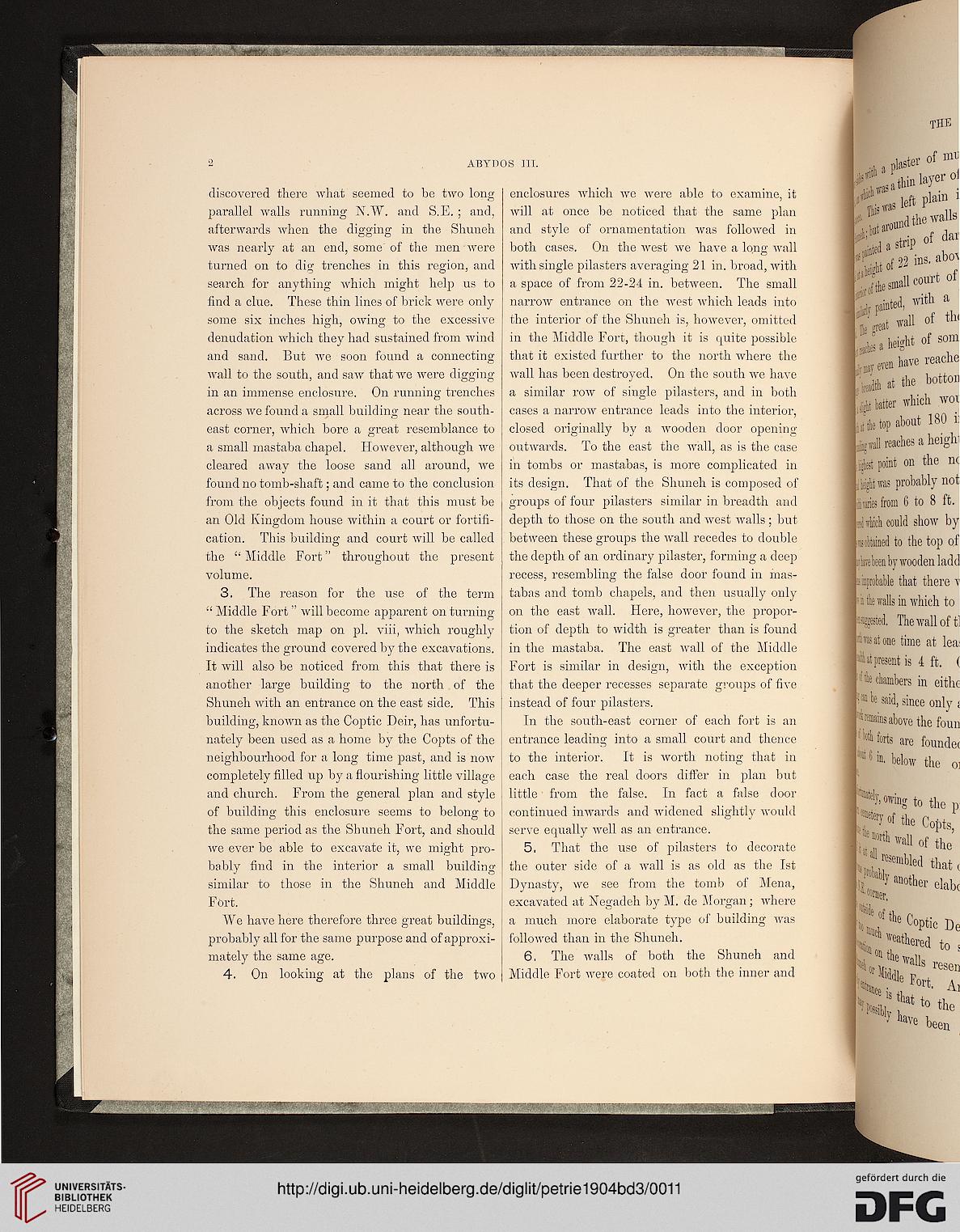 discovered there what seemed to be two long
parallel walls running ~N.W. and S.E. ; and,
afterwards when the digging in the Shuneh
was nearly at an end, some of the men were
turned on to dig trenches in this region, and
search for anything which might help us to
find a clue. These thin lines of brick were only-
some six inches high, owing to the excessive
denudation which they had sustained from wind
and sand. But we soon found a connecting
wall to the south, and saw that we were digging
in an immense enclosure. On running trenches
across we found a small building near the south-
east corner, which bore a great resemblance to
a small mastaba chapel. However, although we
cleared away the loose sand all around, we
found no tomb-shaft; and came to the conclusion
from the objects found in it that this must be
an Old Kingdom house within a court or fortifi-
cation. This building and court will be called
the " Middle Fort" throughout the present
volume.

3. The reason for the use of the term
"Middle Fort" will become apparent on turning
to the sketch map on pi. viii, which roughly
indicates the ground covered by the excavations.
It will also be noticed from this that there is
another large building to the north of the
Shuneh with an entrance on the east side. This
building, known as the Coptic Deir, has unfortu-
nately been used as a home by the Copts of the
neighbourhood for a long time past, and is now
completely filled up by a flourishing little village
and church. From the general plan and style
of building this enclosure seems to belong to
the same period as the Shuneh Fort, and should
we ever be able to excavate it, we might pro-
bably find in the interior a small building
similar to those in the Shuneh and Middle
Fort.

We have here therefore three great buildings,
probably all for the same purpose and of approxi-
mately the same age.

4. On looking at the plans of the two

enclosures which we were able to examine, it
will at once be noticed that the same plan
and style of ornamentation was followed in
both cases. On the west we have a long wall
with single pilasters averaging 21 in. broad, with
a space of from 22-24 in. between. The small
narrow entrance on the west which leads into
the interior of the Shuneh is, however, omitted
in the Middle Fort, though it is quite possible
that it existed further to the north where the
Avail has been destroyed. On the south we have
a similar row of single pilasters, and in both
cases a narrow entrance leads into the interior,
closed originally by a wooden door opening
outwards. To the east the wall, as is the case
in tombs or mastabas, is more complicated in
its design. That of the Shuneh is composed of
groups of four pilasters similar in breadth and
depth to those on the south and west walls ; but
between these groups the wall recedes to double
the depth of an ordinary pilaster, forming a deep
recess, resembling the false door found in mas-
tabas and tomb chapels, and then usually only
on the east wall. Here, however, the propor-
tion of depth to width is greater than is found
in the mastaba. The east wall of the Middle
Fort is similar in design, with the exception
that the deeper recesses separate groups of five
instead of four pilasters.

In the south-east corner of each fort is an
entrance leading into a small court and thence
to the interior. It is worth noting that in
each case the real doors differ in plan but
little from the false. In fact a false door
continued inwards and widened slightly would
serve equally well as an entrance.

5, That the use of pilasters to decorate
the outer side of a wall is as old as the 1st
Dynasty, Ave see from the tomb of Mena,
excavated at Negadeh by M. de Morgan; where
a much more elaborate type of building Avas
folloAved than in the Shuneh.

6. The Avails of both the Shuneh and
Middle Fort were coated on both the inner and

ft at the botton

;ljW point on the nc

i vrhich could show by

:ined to the top of

fc said, since only j